‘Productive’ Talk, but No Deal Between Trump and Cuomo on Hudson Tunnel 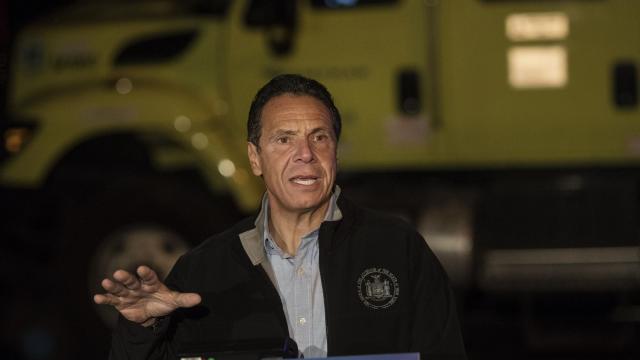 He made a video to show President Donald Trump how a critical tunnel under the Hudson River is falling apart. He flew down to Washington to make his case in person — again.

But Gov. Andrew M. Cuomo of New York left Wednesday’s lunch meeting at the White House empty-handed, without a promise of funding from Trump for what is arguably the most important infrastructure project in the Northeast.

Still, Cuomo said he was optimistic, and that the president understood the urgency of building a new train tunnel and wanted to find a solution.

The leaders had a “productive” lunch — the menu included shrimp and beef dishes and, for dessert, chocolate cake — and Cuomo said both agreed they wanted to avoid having the tunnel project turn into “another government boondoggle.”

The tunnel, which is known as the Gateway project, could cost more than $13 billion.

“I think it’s fair to say the president was receptive to what we were talking about,” Cuomo, a Democrat, told reporters after the lunch. “The president said he wanted to take the next steps to find a way forward.”

The meeting was part of a campaign by Cuomo to convince Trump, a Republican, to provide federal funding for the passageway — New York’s most pressing infrastructure need and a critical piece of the Northeast economy. The face-to-face talk was prompted by a video Cuomo sent Trump last month showing the deteriorating condition of the current century-old rail tunnel that Amtrak and New Jersey Transit rely on.

The tunnel project involves building two single-track tunnels under the Hudson River between Pennsylvania Station in Manhattan and New Jersey. Those tunnels would supplement the two 108-year-old tubes that constitute the only rail links between New York City and points beyond Newark, New Jersey.

The White House said in a statement that the leaders discussed “a number of important topics, focusing on infrastructure.”

“The president cares deeply for his home state of New York and always appreciates the opportunity to engage with the governor on issues important to the state and region,” the White House statement said.

As a first step, Cuomo said he and Trump wanted a precise estimate for the project’s costs, instead of relying on figures from Amtrak, which owns the existing tunnel. State and federal officials planned to discuss how to begin soliciting bids from private companies to examine the costs, Cuomo said.

Cuomo had an answer for those critics disappointed that he did not leave the White House with a concrete promise of federal dollars: “If the president wasn’t interested and wasn’t moved by the video, why have the meeting?”

The meeting was attended by Elaine Chao, the federal transportation secretary; Robert Lighthizer, the U.S. trade representative; John Kelly, the president’s chief of staff; and Rick Cotton, the executive director of the Port Authority of New York and New Jersey.

Before President Barack Obama left office, his administration had reached a funding agreement with Cuomo and Chris Christie, who was then the Republican governor of New Jersey. The two states agreed to cover half the cost with the federal government providing the other half.

Last year, Cuomo and Christie discussed the project with Trump and Chao at the White House in a conversation both sides described as “productive.” But Chao later denied the existence of a funding agreement, leaving the project in limbo.

Cuomo’s meeting with Trump came as Congress is starting to consider a spending bill that could include funding for the tunnel. On Wednesday, Sen. Chuck Schumer, D-N.Y., a key supporter of the Gateway project, again called on Trump to help pay for the project, saying failing to do so would lead to “Armageddon for commuters and derail the economy.”

“The president should not play political games with Gateway,” Schumer said in a statement, “but should instead join the governors of New York and New Jersey, and the bipartisan congressional delegations of those states, in getting it built as quickly as possible.”

Trump has said he wants to work with Democrats on infrastructure after Republicans lost control of the House in the midterm elections.

Amtrak has said the existing tunnels are deteriorating rapidly after having been flooded with salty water in 2012 during Hurricane Sandy. About $2 billion of the estimated cost would go toward rehabilitating the old tunnels after the new ones are built.

Last month, Cuomo ventured into one of the tunnels late at night and sent Trump the video of its poor condition. The governor, who has committed to overhauling much of New York’s crumbling infrastructure, said he was appealing to Trump “builder to builder.”

The Port Authority is a sponsor of the Gateway project. Cotton has essentially been Cuomo’s infrastructure czar, overseeing the construction of a replacement for the Tappan Zee Bridge, and now at the Port Authority, the rebuilding of La Guardia Airport.

Cuomo, who has a been a vocal critic of Trump, said the leaders found common ground over the hazards of building projects.

Cuomo said he and Trump were both dubious about the estimated costs of Gateway, which Cuomo dismissively said were “provided by Amtrak.” If the project costs $13 billion, New York’s share would be $3.25 billion — all the state could afford, the governor said. “I’m at my maximum budget,” Cuomo said.