Trump and Cruz Put Aside Vitriol to Present a United Front 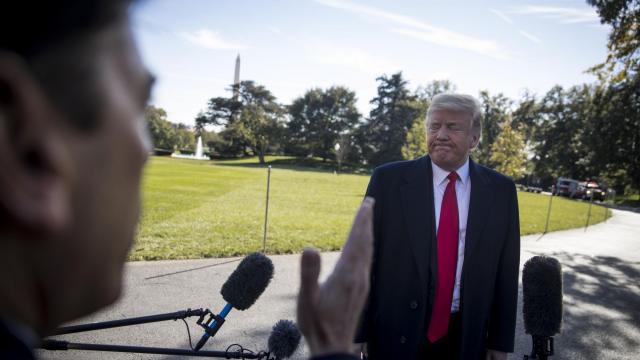 HOUSTON — While competing for the Republican presidential nomination in 2016, Donald Trump posed a biting question to voters: “Why would the people of Texas support Ted Cruz when he has accomplished absolutely nothing for them?”

“It got nasty,” Trump acknowledged about their contest as he addressed an arena full of supporters Monday on behalf of Cruz’s campaign for re-election to the Senate. “And then it ended. And I’ll tell you what — nobody has helped me more with your tax cuts, with your regulation, with all the things that we’re doing, including the military and the vets, than Sen. Ted Cruz.”

If ever there were a moment during this midterm election race that reinforced just how much Trump has claimed control of the Republican Party, it came during the rally at Houston’s Toyota Center. While many elected Republicans remain privately dismayed by the president for various reasons, they have put aside their qualms to embrace him during this campaign season, as demonstrated by Cruz, one of Trump’s last and most virulent opponents during his journey to the White House.

Appearing with Trump in the jampacked 18,000-seat arena on the first day of early voting in Texas, Cruz said he was “honored” to have the president’s help and presented himself as an ally in advancing his policies on taxes, regulation and immigration. “I’m proud to have worked with President Trump hand in hand to pass the biggest tax cut in history,” he said.

While steering clear of any personal praise or taking back any of his past criticism, Cruz committed to supporting Trump for a second term. “In 2020, Donald Trump will be overwhelmingly re-elected as president of the United States,” he said, adding, “I look forward to campaigning beside him in 2020.”

Politics is a business of situational ethics and alliances of convenience, but even in the no-permanent-enemies world of campaigning, rarely have two politicians been so vitriolic toward each other only to turn around and present a unified front as if they really were friends all along.

After all, Trump mocked the appearance of Cruz’s wife and linked Cruz’s father to the assassination of President John F. Kennedy. He nicknamed Cruz “Lyin’ Ted” and called him “unhinged,” “a little bit of a maniac” and “a totally unstable individual.” Cruz for his part called Trump a “sniveling coward,” a “pathological liar,” a “serial philanderer,” a “braggadocious arrogant buffoon” and a “narcissist at a level I don’t think this country has ever seen.”

Even after losing the nomination, Cruz refused to openly endorse Trump at the Republican National Convention, only coming around later in the fall. But after finally embracing him, Cruz stood by him after the “Access Hollywood” tape exposed Trump’s vulgar talk about women, which aides said went a long way to healing their rift.

Speaking with reporters before leaving Washington for Houston, Trump said the two had buried the hatchet. “He’s not Lyin’ Ted anymore,” the president said. “He’s Beautiful Ted.” Trump said the two had waged a “very, very nasty and tough campaign,” but he had come to appreciate Cruz. “I actually like him a lot. And he’s a very smart guy.”

Still, Trump has never apologized for attacking Cruz’s family and refused to do so again Monday. “I don’t regret anything, honestly,” he said. “It all worked out very nicely.”

Cruz was hardly effusive heading toward the rally, saying he made a calculated decision to put the past behind him to be more politically effective. “If I put my own personal hurt feelings ahead of representing Texas, that would be abdicating my responsibility,” he said on “This Week” on ABC News over the weekend.

Andy Surabian, a Republican strategist who ran the campaign war room for Trump in 2016, nonetheless said the relationship between the president and the senator has evolved into an authentic partnership. “I would call it genuine rapprochement,” he said.

In refusing to abandon Trump after “Access Hollywood,” he said, Cruz sealed that bond. “When he didn’t do that, the way he was viewed in Trump’s orbit began shifting for the better,” Surabian said. “Since then, Cruz has been one of Trump’s most reliable supporters in the Senate.” Mike Huckabee, the former governor of Arkansas and father of Sarah Huckabee Sanders, the White House press secretary, made light of the history of bad blood between the president and the senator.

“Is @realDonaldTrump being disingenuous about ‘Lyin’ Ted?'” he wrote on Twitter on Monday. “Not at all. He was actually saying LION Ted — ‘King of the Washington Jungle.’ The press just misunderstood.”

Cruz faces a vigorous challenge from Rep. Beto O’Rourke from El Paso, who has become a national star among Democrats and brought in $38 million in the past quarter, a Senate fundraising record, but still trails in his underdog bid to turn conservative Texas blue.

In a debate last week, O’Rourke adopted the president’s sobriquet about Cruz. “He’s dishonest, and it’s why the president called him Lyin’ Ted, and it’s why the nickname stuck — because it’s true,” O’Rourke said. He later expressed regret, saying, “I took a step too far.” He spent Tuesday campaigning around Houston. Matt Angle, a longtime Democratic strategist from Texas and the founder of the Lone Star Project, a political action committee that seeks to counter Texas Republicans, said Trump’s decision to campaign for Cruz indicated that Republicans are scared the senator might lose.

“Trump coming to Texas reminds everyone that Ted allowed Trump to call him a liar, insult his wife and disrespect his father and not ever be forced to apologize,” Angle said. “There are few people Texans respect less than those who roll over for a blowhard bully. Essentially, by bringing Trump to Texas to stump for him, Cruz is surrendering his dignity to Trump in exchange for a public belly rub.”

Rick Tyler, a former strategist for Cruz and one of the most visible Republican critics of Trump, said he saw the visit not as a sign that the senator might lose but that the president knew he would win and wanted to take credit. “Theirs is a transitional relationship,” Tyler said, “but Trump is principally in Texas to claim that he was the reason Cruz won.”

In their speeches Monday night, Trump and Cruz rallied the crowd in favor of their shared priorities of cutting taxes, closing the border, curbing regulations and protecting gun rights while saying only a little about each other. Instead, each preferred to attack O’Rourke, whom Trump called “a stone-cold phony,” and Democrats, who they said would replace freedom with socialism and cater to foreigners.

Trump boasted that polls have found that he is unpopular in other countries, saying that means he is doing a good job. “A globalist is a person that wants the globe to do well, frankly, not caring about our country so much,” he said. “You know what I am? I’m a nationalist, OK? Nationalist. Use that word, use that word.”