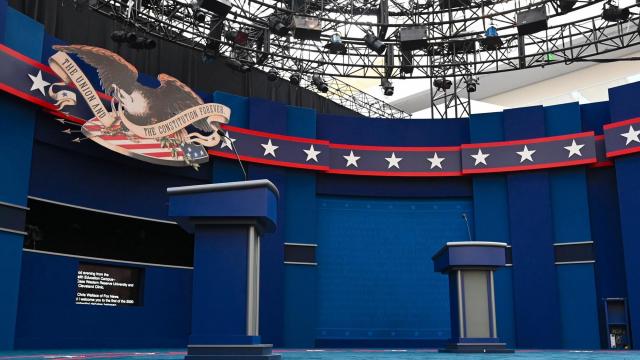 CNN — At the end of a rancorous and chaotic debate -- in which President Donald Trump tried to bulldoze challenger Joe Biden with insults, slashing interruptions and callous attacks on Biden's family -- the President questioned the legitimacy of the November election, refused to say whether he would concede should he lose and refused to condemn White supremacists.

As Trump was wrapping up a nearly unwatchable 90 minutes in which his interruptions often made it impossible for viewers to follow what the two men were talking about, moderator Chris Wallace asked Trump whether he would urge his supporters to "stay calm and" avoid any civil unrest, and would pledge not to "declare victory until the election has been independently certified."

"I'm urging supporters to go into the polls and watch very carefully," Trump said, on a night where he continued his unfounded attacks on voting by mail. "If it's a fair election, I am 100% on board. But if I see tens of thousands of ballots being manipulated, I can't go along with that."

Biden, by contrast, pointed out that Trump's own FBI director, Christopher Wray, has said there's no evidence of widespread voter fraud. Biden agreed he would not declare victory until the election was certified.

"This is all about trying to dissuade people from voting, because he is trying to scare people into thinking that it's not going to be legitimate. Show up and vote. You will determine the outcome of the election. Vote, vote, vote," Biden said. "If you're able to vote early in your state, vote early. If you are able to vote in person, vote in person. Vote whatever way is the best way for you. ... He cannot stop you from being able to determine the outcome of this election."

Trump's vows to challenge the election results came at the end of a first presidential debate that devolved into chaos and an unrelenting volley of personal attacks from the first exchange.

Trump derailed the night by repeatedly talking over Biden, who responded with jabs at the President -- calling him a clown more than once and "the worst president that America has ever had."

Trump's technique of attacking Biden and interrupting him on nearly every subject led the former vice president to lose his train of thought on several key points early in the debate, but he seemed to acclimate as the night went on -- occasionally shaking his head in disgust.

Early on during a discussion about the explosive new reports from The New York Times that Trump paid little or no federal income taxes during much of the past two decades, Biden tried to pivot into an argument about fairness, noting that the average schoolteacher paid more in taxes than Trump. But the President soon overtook Biden's time and steered the conversation onto safer ground about tax policy.

During a sharp exchange over health care -- which grew out of a question about Trump's Supreme Court pick, Judge Amy Coney Barrett, and the lawsuit challenging the Affordable Care Act -- Biden grew exasperated. "Donald, would you just be quiet for a minut?," he said.

He later broke into another one of Trump's retorts with a plea: "Will you shut up, man?" Throughout the night, Biden continued to call out the President for attempting to bulldoze the debate, making it clear from the beginning that he wouldn't try to fact-check Trump's volley of untruths.

When Biden was promised "two minutes uninterrupted" by moderator Chris Wallace, who asked why voters should elect him over Trump, the former vice president said Trump has made the country "sicker, poorer, more divided and more violent."

"When I was vice president, we inherited a recession. I was asked to fix it. I did. We left him a booming economy and he caused the recession," Biden said. "With regard to being weaker -- the fact is that I have gone head to head with (Russian President Vladimir Putin) and made it clear to him we're not going to take any of his stuff."

"He's Putin's puppy," Biden said of Trump. "He refuses to say anything to Putin about the bounty on the heads of American soldiers --." Trump at that moment began to interrupt him with an attack on his son, Hunter.

The debate was divided into six topics, but many Americans tuning in would have had a hard time finding any clarity about either man's positions, as Trump -- playing the role of relentless agitator -- delivered a bullying performance that led Wallace to raise his voice at more than one point to try to regain control.

When Wallace broached the question of race relations in America and asked the President to condemn White supremacists who have incited violence at demonstrations against police violence across the country, Trump gave an appalling answer, even for him, by refusing to do so. Wallace asked him whether he was prepared to tell them to stand down during the protests.

Biden waded into the discussion. "Say it. Do it. Say it," the former vice president said.

"Give me a name. .... Who would you like me to condemn?" Trump said to Wallace, who named the group known as "Proud Boys" as an example.

"Proud Boys -- stand back and stand by," Trump answered. "But I'll tell you what, somebody has got to do something about Antifa and the left, because this is not a right-wing problem. This is a left-wing problem."

Biden accused the President of inflaming racial tensions in this country, accusing the Trump of using "everything as a dog whistle to try to generate racist hatred, racist division."

He also charged that the President has "done virtually nothing" for Black Americans, adding that that group has suffered disproportionately from the coronavirus.

That led Trump to tout his work on criminal justice and attack to the former vice president for taking a leading role in the passage of the 1994 crime bill, which led to the incarceration of many Black men in America.

"I'm letting people out of jail now," Trump said. "You have treated the Black community about as bad as anybody in this country."

Trump confirms, rather than changes, his narrative

Trump entered the debate looking to change the race as he trailed Biden, but instead played up to his most base instincts with a performance that seemed likely to alienate the independent voters repelled by his style, as well as many of the female voters who have abandoned him since 2016.

The President entered this first of three presidential debates in a far more vulnerable position than in his 2016 match-ups with Hillary Clinton. Many voters have already made up their minds about Trump, giving him poor marks for his handling of both the pandemic and the tension over race relations and police violence this year.

The President's slashing and combative style has been one of his biggest problems with female voters, and Biden has been leading him among women by some 30 points in recent polls, but Trump did nothing to rein in the conduct that has alienated so many of them. A CNN poll of debate watchers showed 60% thought Biden won, compared with just 28% for Trump.

He repeatedly insulted Biden's intelligence throughout the debate, cutting him off at one point when he used the word "smart."

"Don't ever use the word smart with me," Trump said. "There's nothing smart about you, Joe."

Biden, who has a 47-year career in politics, struggled to make his own points at the beginning between Trump's interruptions, but he regained his footing through several exchanges on health care and the coronavirus pandemic, which has claimed some 200,000 lives. Biden spoke directly to families who now have an "empty seat at the kitchen table," and noted that about 40,000 Americans are still contracting the virus each day.

"The President has no plan. He hasn't laid out anything," Biden said.

Trump disputed Biden's comparisons of the spread of the virus in the US, arguing, for example, that other countries were underreporting their numbers, and he promised that a vaccine and life-saving treatments were right around the corner.

"It's China's fault. It never should have happened," Trump said.

"We've done a great job," he added, accusing the press of distorting his record on the virus.

At one point he turned to Biden: "You would have lost far more people," he said.

Biden told Trump to get out of his "bunker," and "get out of the sand trap and your golf course" to bring Democrats and Republicans together to do what needs to be done to save lives.

Trump tried to deflect the criticisms that he rarely wears a mask and has drawn thousands of people to his rallies with no social distancing, by claiming that Biden could never draw the crowds that he does. He repeatedly accused Biden of wanting to keep the US shut down at the cost of businesses all over the country.

"This guy will close down the whole country and destroy this whole country," Trump said as Biden laughed off the false claim that the President often makes at his campaign rallies.

Trump on the defensive over taxes

During an exchange over the new revelations about Trump's tax returns in The Times -- which showed the President paid no federal income taxes in 10 of the last 15 years -- Biden noted that Trump paid less in taxes than most schoolteachers, but he fumbled a chance to drill the President on his tax liabilities and questionable business record, given that Trump evaded taxes largely by writing off his losses.

"You're the worst president America has ever had," Biden said.

Trump disputed the report by claiming that he has paid millions in taxes, but he also defended his approach of paying as little as possible in taxes as an aspect of his sharp business acumen.

"I don't want to pay tax," Trump said, arguing that he has done what every other private business person has done by using the law to his advantage.

Reprising lines that he used throughout his impeachment, Trump tried several times to rattle Biden by accusing his son Hunter of corruption because he worked for overseas companies while his father was vice president. The President specifically raised the younger Biden's work for the Ukrainian energy company Burisma.

While Biden has been unnerved by questions about his son on the campaign trail, he was collected Tuesday night and tried to speak directly to Americans as he rebutted Trump's claims.

"This is not about my family or his family, this is about your family -- the American people," Biden said. "He doesn't want to talk about what you need."

Later Biden called out the President for reported comments that he made describing deceased members of the military as "suckers" and "losers," noting that he took personal offense because his son Beau Biden, who died of brain cancer in 2015, spent a year in Iraq and was awarded the Bronze Star.

"He was not a loser. He was a patriot. And the people left behind there were heroes," Biden said pointing his finger at the President, before Trump cut him off -- pretending that he thought Biden was talking about Hunter Biden.

The interjection was clearly an attempt by Trump to score a point by noting that Hunter Biden was discharged from the Navy Reserve in 2014 after he failed a drug test, testing positive for cocaine.

This story has been updated with additional context following the debate.