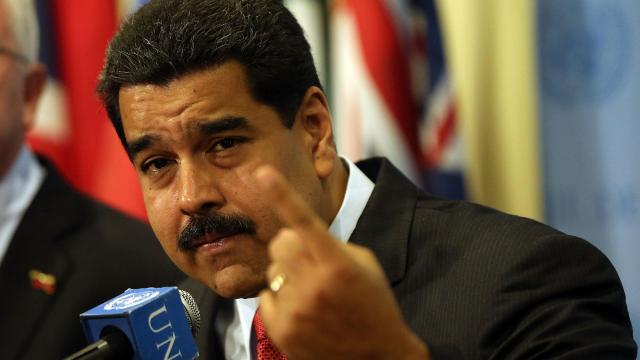 CNN — The Justice Department announced narco-terrorism and other criminal charges against Venezuelan President Nicolás Maduro and senior leaders from his government on Thursday, in a move marking a modern low point in relations between the US and the ailing socialist state.

As part of the sweeping actions announced by the Trump administration, the State Department designated Maduro and top current and former officials from Venezuela's military, parliament and judiciary under its Narcotics Rewards Program, offering multimillion-dollar bounties.

Criminal charges brought by federal prosecutors in New York's Southern District, Miami and Washington, DC, allege that the leaders of the Venezuelan regime manage a drug cartel to coordinate with the Colombian rebel group FARC to traffic cocaine to the United States.

US prosecutors say that Maduro and top parliamentary, military and judiciary officials lead the so-called Cartel de los Soles, a group the US has long said was made up of corrupt current and former Venezuelan military members involved in trafficking and other crimes.

In addition to Maduro, those facing charges include:

CNN has asked the Venezuelan government for comment on the Trump administration's actions.

Attorney General William Barr, who announced the charges in a video news conference in Washington, said that despite the global coronavirus pandemic, US officials decided to proceed with the charges because the health emergency underscores the need for Maduro to be removed from leadership of Venezuela.

Thursday's charges, he said, were "focused on rooting out the extensive corruption within the Venezuelan government."

In a Twitter post Thursday, Maduro denounced the new charges, writing that Colombia and the US were conspiring to overthrow his government.

"As head of state I am obliged to defend the peace and stability of the entire homeland," Maduro wrote.

Prosecutors said that Maduro's role in narco-trafficking dates back to the 1990s. In recent years, while some in the FARC sought to negotiate a peace deal with the Colombian government, others in the organization moved fighters and operations to areas of western Venezuela under the protection of the corrupt Venezuelan regime officials.

The criminal charges come after a period of historic tumult in Venezuela that saw Maduro's leadership challenged following an election condemned by international authorities and massive street protests. The US and a host of other countries and international bodies have instead recognized the president of Venezuela's National Assembly, Juan Guaidó, as the country's leader, and the Trump administration has waged a campaign of aggressive economic punishment that aimed to force Maduro out of power.

The US has accused the Maduro regime of widespread human rights abuses, including extrajudicial killings, torture, arbitrary arrest and the detention of Venezuelan citizens. Last year, the United Nations' Office of the High Commissioner for Human Rights vividly detailed the allegations in a report that described a state failing to deliver basic necessities to its people, including the right to food, medical care and freedom of speech.

The Maduro administration has fiercely rejected accusations of human rights abuses in the past. Last year, it called the UN report "a selective and openly partial vision on the real situation of Human Rights in the Bolivarian Republic of Venezuela."

Members of the regime have also been accused in the past of facilitating narcotrafficking operations in the country, in part to fuel a crumbling economy marred by rampant government corruption.

Colombian officials told CNN last year that drug smuggling in Venezuela has recently involved the Colombian leftist guerrilla group ELN, which is considered a terrorist organization by the US, working with the Maduro military.

US officials have also said that Venezuela is harboring and working with the Iranian-backed Hezbollah and the reemerging Colombian insurgent group FARC, both of which are designated terrorist organizations by the US.

Senior Venezuelan officials charged by US prosecutors in the past with drug trafficking have sought to portray the US as meddling imperialists.

CORRECTION: This headline and story have been updated to remove a claim that the Trump administration was planning to designate Venezuela as a state sponsor of terrorism. An official from the State Department, which makes the designation, said that was incorrect.