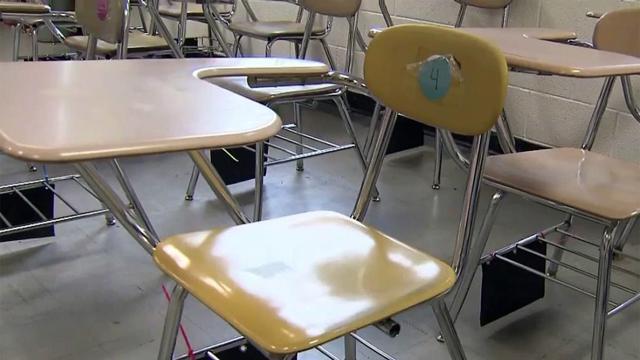 CNN — President Donald Trump said Tuesday that he's putting pressure on governors to reopen schools this fall, part of his push to reopen the country despite a recent surge in coronavirus cases.

"We hope that most schools are going to be open," Trump said at a White House event, claiming that some places will want to stay closed "for political reasons."

"They think it's going to be good for them politically, so they keep the schools closed," the President alleged without evidence. "No way."

"We're very much going to put pressure on governors and everybody else to open the schools, to get them open," said Trump, who has been anxious to reopen America to kickstart the economy and otherwise move on from the pandemic, despite its resurgence.

The President also claimed that the US is "not closing" and will "never close," even as the most recent coronavirus data from Johns Hopkins University show that at least 32 states are reporting higher rates of new cases this week compared to last week.

Despite the rise, the Trump administration used several events at the White House on Tuesday to promote a plan to strongly urge a return to schools. The events were attended by a variety of stakeholders, including higher education and K-12 administrators, teachers, students, parents, health and education leaders from the state level.

School reopenings has emerged as one of the trickiest -- and most sensitive -- issues as the nation looks to adopt a sense of normalcy under the pandemic. Some schools have made multiple plans so they can stay flexible just a few weeks before the start of the 2020-21 academic year.

The President did acknowledge that the onus remains largely on governors to comply with the administration's suggestions to reopen academic institutions.

"That will be largely up to the governors," he said, "but it's also, they're in very strong consultation with us."

Trump specifically zeroed-in on Harvard University at the event, saying the school's leadership "ought to be ashamed of themselves" for its plan to bring up to 40% of undergraduates back to campus for the fall semester but have all course instruction delivered online.

On a call with governors earlier Tuesday, Vice President Mike Pence and Education Secretary Betsy DeVos also pushed for school reopenings, tying Americans' return to the classroom with the health of the US economy.

Pence underscored that the school reopenings would play an important role in a rebounding economy, and emphasized it will be up to governors to make that happen. But he also acknowledged that "there are many southern states have seen a rise in cases as of this morning."

"We just want you to know the priority that we're placing on this, that the President's placing on it, you know, how anxious we are to work with you with that," Pence remarked.

On the call, DeVos dismissed what she called one school district's "attempt at distance learning."

"A couple of hours a week of online school is not OK. And a choice of two days per week in the classroom is not a choice at all. So this can't happen again this fall, it would really fail all of America's students, and it would fail taxpayers who are paying high taxes for education. Ultimately, it's not a matter of if schools need to open, it's a matter of how," she said.

DeVos, who has been largely out of view amid the pandemic, also urged local leaders to look at the data and "weigh the risk" of opening.

The school year is rapidly approaching, in some places as soon as August. Being able to safely reopen schools would not only help resume a normal education environment but alleviate parents of the obligations that come with having children at home, and free more adults to return to pre-pandemic jobs. But experts continue to struggle with ways to do so safely, especially at a time when the virus is reaching record highs in some parts of the country.

The Trump administration's push to reopen schools is particularly notable as the federal government has largely left reopening decisions up to state and local governments.

Tuesday morning, the administration officials cast the push as an effort to protect the nation's "most vulnerable" students due to the critical services schools provide. The officials closely echoed the President's rationale for reopening the country, saying school closure disruption has had "significant negative impact."

"It's important to consider schools as high-priority settings within the community given the unique and critical role they play in our society," a senior administration official said.

A senior Centers for Disease Control and Prevention official told CNN's Nick Valencia on Monday that "schools should be the first to open and the last to close," adding, "Kids need to physically be in school."

The CDC is planning to release new guidance on how best K-12 students can physically return to the classroom this year, the senior CDC official with knowledge of discussions said, though the exact timetable for the proposed new guidance is unclear.

The recommendation was presented internally to leaders at the CDC early last week and is "a priority this week," according to the senior official. Over the weekend, senior officials at the agency presented CDC Director Dr. Robert Redfield with details on the science behind why schools should reopen, the source said. The specifics of the guidance were not available.

CNN has reached out to the CDC and the White House coronavirus task force for comment on the new guidance.

Trump has repeatedly called for schools to reopen, tweeting Monday, "SCHOOLS MUST OPEN IN THE FALL!!!" He then suggested that Democrats "don't want to open schools in the Fall for political reasons, not for health reasons!" ahead of the November election. His campaign has also used the issue to criticize presumptive Democratic presidential nominee Joe Biden, asking Tuesday morning if he will "side with union bosses who want to keep schools closed or parents who want their kids to keep learning?"

This story has been updated with additional reporting and reaction.