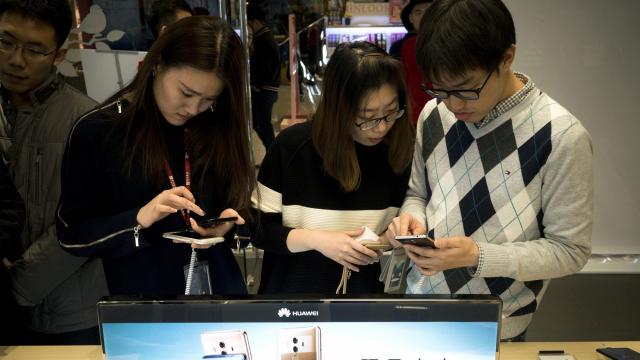 WASHINGTON — A senior administration official said Friday that the United States had repeatedly warned Huawei, one of China’s flagship technology firms, about violating U.S. sanctions on Iran before the arrest Saturday of one of its top executives.

“We’ve warned them for quite some time of violating the Iranian sanctions,” Larry Kudlow, director of the White House’s National Economic Council, said on CNBC on Friday. “We have these sanctions on Iran, it runs against our policy, why shouldn’t we enforce that?”

The arrest, which was executed by Canadian authorities in Vancouver, British Columbia, has threatened to further complicate the trade conflict between the United States and China as they try to resolve their differences during a 90-day truce.

Kudlow tried to play down any impact on those discussions, saying that the arrest of Meng Wanzhou, Huawei’s chief financial officer, was a separate matter that should have no bearing on economic negotiations. President Donald Trump and the Chinese leader, Xi Jinping, agreed last Saturday to the 90-day trade truce, during which time there would be no additional tariffs as the two sides talk.

“I don’t know, by the way, that this necessarily spills over into the trade talks,” Kudlow said, adding that he doubts it will stall the negotiations. “I think it’s a separate track.”

Kudlow said he remained optimistic that China’s car tariffs would “come down rapidly” and that Xi would make good on commitments made to Trump. The Trump administration has said that China promised to purchase $1.2 trillion in additional goods and services over the next several years, and that it has expressed a willingness to address concerns about protection of U.S. intellectual property.

It is possible, Kudlow said, that the 90-day window for negotiations could be extended if the talks are constructive.

“The president has indicated if there’s good solid movement and some good action, he might be willing to extend the 90 days,” he said.

The timing of Meng’s arrest has raised questions about whether the White House was briefed by the Justice Department before Trump and Xi met for dinner at the Group of 20 summit in Argentina last weekend. In a separate interview on Fox Business Network, Kudlow said that the arrest caught the White House by surprise. “President Trump did not know; none of us knew, as a matter of fact,” he said.

The United States has questions about links between Huawei and Chinese security agencies and the People’s Liberation Army. Ren Zhengfei, the founder of Huawei and Meng’s father, is a former army engineer who has become one of China’s most successful entrepreneurs. U.S. officials are pressing other countries not to enter into deals with Huawei on developing fifth-generation, or 5G, wireless service networks.

Earlier this year, the Commerce Department banned ZTE, China’s second-largest maker of telecommunications equipment, from purchasing components made in the United States. Federal authorities said ZTE had violated U.S. sanctions against Iran and North Korea, in a move that caused the Chinese company to cease “major operating activities” for a time. Trump eventually offered a reprieve, after a direct plea by Xi, and ZTE agreed to pay a $1 billion fine, replace its leadership and allow inspections of its operations.

Current and former Trump administration officials have compared the Huawei case with that of ZTE, although the extent of Huawei’s violations was not immediately clear.

Meng was expected to appear in court for a bail hearing in Vancouver on Friday as she awaits extradition to the United States.

China has demanded her immediate release and called her treatment a “gross violation of human rights.”

Despite the trade truce, federal officials continued to move aggressively against Beijing over its trade practices. On Friday, the U.S. International Trade Commission, an independent federal investigatory agency that reports to several Cabinet departments, unanimously ruled that U.S. manufacturers have been “materially injured by unfairly traded imports” of Chinese aluminum alloy sheets used in a range of consumer goods.

The Department of Commerce had previously imposed steep duties on imports of common alloy aluminum sheet from China. Since the investigation was initiated earlier this year, imports of aluminum alloy sheets have dropped 90 percent, the department reported.