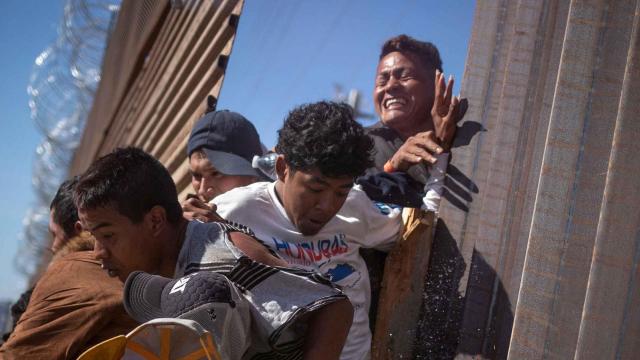 (CNN) — President Donald Trump on Monday denied that federal agents along the US-Mexico border used tear gas on child migrants, but photos and videos show women and children migrants were among those caught up in an incident between border agents and a migrant group that rushed a border crossing Sunday.

At the White House, Trump said that border agents involved in the incident "had to use (force) because they were being rushed by some very tough people and they used tear gas."

"Here's the bottom line, nobody's coming into our country unless they're coming legally," he added. Trump also said the Mexican government "wants to see if they can straighten it out."

The President later also denied that the tear gas was used against children. However, video and images of the scene also showed a cloud of tear gas that sent people running and screaming, including families with young children.

"Is it OK to use tear gas on children?" a reporter asked.

The President responded, "We didn't. We don't use it on children."

CBP Commissioner Kevin McAleenan said, per protocol, the decision to fire was made by agents on the scene using their professional judgment, and also per protocol the incident will be reviewed. He also described CBP as having responded with use of force to primarily adult males throwing rocks.

McAleenan told reporters earlier Monday that as many as 1,000 people that were part of a migrant caravan traveling through Central America and Mexico sought to enter the US illegally.

He added that according to CBP's initial report, 69 people were apprehended entering the US. McAleenan said he was not aware of any successful illegal entries by caravan members into the US.

"[CBP] effectively managed an extremely dangerous situation involving over 1,000 individuals who sought to enter the US unlawfully in large groups. They did so safely and without any reported serious injuries on either side of the border," McAleenan said.

Sunday's incident marked an escalation of tensions that have been mounting since groups of Central American migrants began arriving in Tijuana a few weeks ago on their journey to attempt to gain entry to the US. The incident began with a march to the border that organizers said would be peaceful. In response, CBP deployed additional personnel to San Ysidro, California, on Sunday in expectation of demonstrations on both sides of the border.

McAleenan said individuals breached the border fence to the east of San Ysidro and some went west and sought to enter through the Tijuana River channel. He described "assaultive behavior" by some migrants in both locations. Border Patrol agents countered using "less lethal devices," which included tear gas and "other projectiles," but not rubber bullets. He said CBP does not have rubber bullets in its inventory on the border.

Four agents were hit with rocks, but because of their protective gear they were not seriously injured, McAleenan said.

Sunday's melee closed one of the world's busiest international crossings, San Ysidro Port of Entry, near San Diego, to vehicle and pedestrian traffic for several hours. By Sunday afternoon, CBP reopened crossing lanes in both directions to pedestrians and vehicles.

On Monday morning, the President tweeted that the US "will close the Border permanently if need be."

On the other side of the border in Mexico, Tijuana police had arrested 39 people by Sunday night, the agency said on Facebook.

The House Judiciary Committee's top Democrat, New York Rep. Jerry Nadler, said in a statement that the incident on the border "is not a surprise, and this administration's shoot-from-the-hip border policies have only complicated the situation."

"Our laws allow asylum seekers to apply for asylum at our southern border, but there is really no clear policy on how to do that," Nadler added. "And that kind of confusion inevitably leads to desperate incidents like those we saw yesterday."