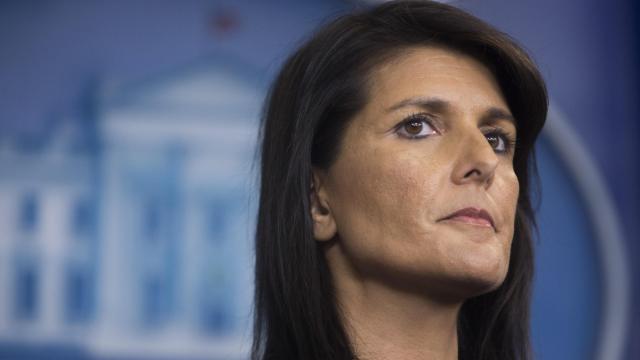 WASHINGTON — Nikki R. Haley, the U.S. ambassador to the United Nations, said Sunday that women who have accused President Donald Trump of sexual misconduct “should be heard,” a surprising break from the administration’s long-standing assertion that the allegations are false and that voters rightly dismissed them when they elected Trump.

Haley, a former governor and one of the highest-ranking women in Trump’s administration, refocused attention on the allegations against the president by insisting that his accusers should be treated no differently than the scores of women who have come forward in recent weeks with stories of sexual harassment and misconduct against other men.

“They should be heard, and they should be dealt with,” Haley said on CBS’ “Face the Nation.” “And I think we heard from them prior to the election. And I think any woman who has felt violated or felt mistreated in any way, they have every right to speak up.”

Her remarks are the latest indication that the president’s behavior toward women — more than a dozen have accused him of unwanted touching, forcible kissing or groping — may not escape renewed scrutiny at a time when an array of powerful men have had their careers derailed because of their improper treatment of women, some of which took place decades ago.

The #MeToo movement has engulfed prominent members of both political parties. Democrats have appeared determined to seize the moral and political high ground, largely forcing their accused party members to resign. Republicans have been more divided: Even as some accused members have stepped down, the party has largely stood by Trump. And it remains bitterly split over how to respond to the case of Roy Moore, the Republican Senate candidate in Alabama who has been accused of molesting an underage girl and attempting to date other teenagers when he was in his 30s.

Some of the women who first accused Trump during the campaign last year have expressed a renewed desire to press their case. Three of them will be interviewed by Megyn Kelly on NBC’s “Today” show on Monday.

So far, though, the upheaval in societal norms about sexual conduct in the workplace has swirled around the president, but left him largely unscathed.

Undaunted, the president has used Twitter to mock other men who have been accused, including Sen. Al Franken, D-Minn., who announced his plans to resign after several harassment allegations. Trump, though, has defended and endorsed Moore, calling the claims against him “troubling” but insisting that he is needed in the Senate to advance the Republican agenda.

Through it all, the White House has repeatedly sought to deflect and discredit any attempt to revisit the “Access Hollywood” tape, in which Trump crudely bragged about kissing women and grabbing their private parts, or to examine again the allegations from the women who came forward weeks before the 2016 election to accuse Trump of crude sexual behavior.

In recent months, Trump has privately been casting doubt that the “Access Hollywood” tape is authentic, despite publicly acknowledging shortly after its release in October 2016 that “I said it, I was wrong, and I apologize.”

And he has steadfastly denied all of the women’s accusations, calling them “made-up stuff” and “totally fake news.” Asked about the sexual misconduct accusations against the president and whether the women were lying, Sarah Huckabee Sanders, White House press secretary, said that they were and that “the president addressed the comments back during the campaign.”

Still, Trump may not have the luxury of waving aside the allegations against him forever as the maelstrom of sexual misconduct complaints that has toppled the careers of politicians, media figures and business executives grows.

In the new and less forgiving environment, Juliet Huddy, a former Fox News anchor, came forward last week to accuse Trump of having kissed her on the lips when they were riding in an elevator in 2011. Huddy said she did not feel offended or threatened, but said she had matured and now would have rejected his affections.

“He went to say goodbye and he, rather than kiss me on the cheek, he leaned in on the lips,” Huddy said last week on the “Mornin’!!! With Bill Schulz” podcast. Huddy, who formerly worked as a host on “Fox & Friends,” has also accused Bill O’Reilly, the former Fox News host, of sexually harassing her.

One woman who had previously made allegations against the president, Summer Zervos, a former contestant on Trump’s show “The Apprentice,” has filed a lawsuit against him, claiming that Trump and his associates defamed her by dismissing her account, and those of other women, as “lies” and “nonsense.” The lawsuit, if it is allowed to move forward, could provide a legal forum for other women to repeat their allegations. (BEGIN OPTIONAL TRIM.) Among those who could be given a new platform to lodge accusations against the president is Temple Taggart, who claimed that when she was competing in the Miss USA pageant in 1997, Trump kissed her on the mouth. She expressed dismay recently that her accusations against the president did not have more political effect last year.

“With Trump, it was all brushed under the rug,” Taggart said.

Jessica Leeds, who last year accused Trump of grabbing her breasts and trying to put his hand up her skirt, said recently that she would be happy to tell her story under oath as part of Zervos’ lawsuit.

The president’s lawyers are seeking to have the lawsuit dismissed. But in the meantime, Haley’s remarks suggest that the political environment in Washington may be evolving.

In her first year, Haley has proved herself to be a valued and loyal member of the president’s Cabinet, serving as a confidante on foreign policy issues, especially during the debate over whether to declare that Iran was no longer in compliance with the 2015 nuclear deal.

(END OPTIONAL TRIM.) Viewed as a rising star in the Republican Party and a potential presidential candidate when she was governor of South Carolina, Haley was discussed as a possible replacement for Secretary of State Rex Tillerson when it was thought that Trump might fire him. And her high-profile service as the nation’s top diplomat at the U.N. could help propel her if she decides to pursue a return to elective office.

But her comments Sunday suggest she is also willing to depart from the approved White House script. Initially, Haley talked generally about women who come forward to accuse men of misconduct, saying that “women who accuse anyone should be heard.”

But she went on to specifically refer to the women who came forward in October last year to make allegations against Trump. Asked whether the election meant the allegations against the president should be a settled issue, Haley said that was for “the people” to decide.

“I know that he was elected,” she said. “But, you know, women should always feel comfortable coming forward. And we should all be willing to listen to them.”