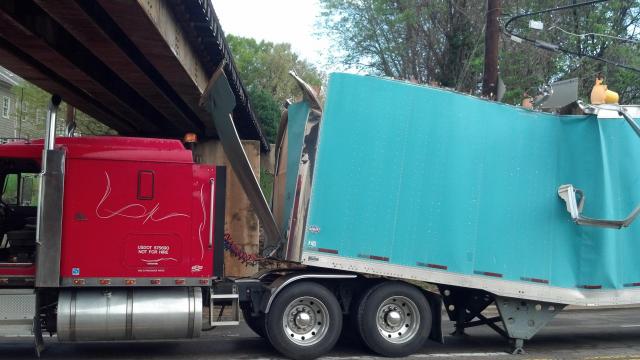 Raleigh, N.C. — A truck got stuck underneath a railroad overpass in Friday morning in Raleigh after police said the driver ignored several warning signs about the bridge's low clearance.

The crash happened shortly before 10 a.m. on Peace Street near Glenwood Avenue. Raleigh police said driver Roy Thomas Williamson, of Virginia, was heading west on the road when he disregarded several caution signs with flashing yellow lights. The bridge clearance is 12 feet 4 inches.

The trailer crumpled and broke in half when it hit the overpass and got lodged underneath, police said. It took several hours to remove the truck, prompting officers to close that section of Peace Street until about 1 p.m.

No injuries were reported and the bridge had minor damage. Estimated damage to the trailer was $10,000.

Williamson was cited for unsafe movement resulting in property damage and failure to carry registration.