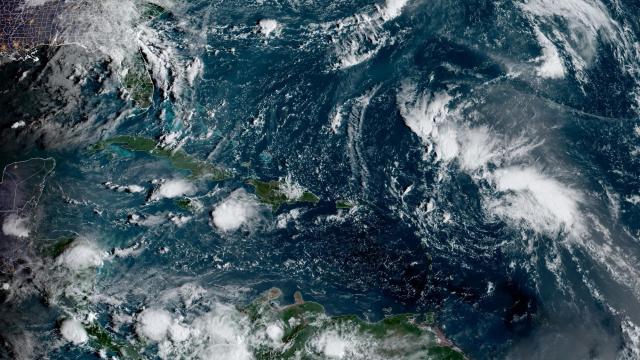 Tropical Storm Peter formed in the Atlantic Ocean east of the Caribbean on Sunday, forecasters said, announcing the 16th named storm of the 2021 season.

As of 11 a.m. Eastern on Sunday, the storm was about 430 miles east of the northern Leeward Islands and expected to pass “well north of the Lesser Antilles,” according to the National Hurricane Center.

The center said that rainfall around the edge of the storm could lead to “areas of urban and small stream flooding” in Puerto Rico, the Virgin Islands and the rest of the northern Leeward Islands from late Sunday into Tuesday.

Meteorologists have faced a dizzying several months as the arrival of peak hurricane season — August through November — has led to a run of named storms that formed in quick succession, bringing stormy weather, flooding and damaging winds to parts of the United States and the Caribbean.

The arrival of Peter came as another storm, Odette, weakened into a post-tropical cyclone on Saturday and was expected to bring heavy rain and strong wind gusts to Newfoundland and Labrador on Sunday into Monday, according to the Canadian Hurricane Centre.

Tropical Depression Nicholas made landfall early on Sept. 14 as a hurricane over the Gulf Coast of Texas. The storm unleashed heavy rain across parts of Louisiana, threatening to hinder the state’s efforts to restore electricity to tens of thousands of customers who were already battered by Hurricane Ida.

Tropical Storm Mindy hit the Florida Panhandle on Sept. 8, just hours after it formed in the Gulf of Mexico, while a powerful Hurricane Larry was simultaneously churning in the Atlantic.

Ida battered Louisiana as a Category 4 hurricane on Aug. 29 before its remnants brought deadly flooding to the New York area. Two other tropical storms, Julian and Kate, both fizzled out within a day at the same time.

In mid-August, Tropical Storm Fred made landfall in the Florida Panhandle and Hurricane Grace hit Haiti and Mexico. Tropical Storm Henri knocked out power and brought record rainfall to the Northeastern United States on Aug. 22.

The links between hurricanes and climate change are becoming more apparent. A warming planet can expect to see stronger hurricanes over time, and a higher incidence of the most powerful storms. But the overall number of storms could drop, because factors like stronger wind shear could keep weaker storms from forming.

Hurricanes are also becoming wetter because of more water vapor in the warmer atmosphere; scientists have suggested storms like Hurricane Harvey in 2017 produced far more rain than it would have without the human effects on climate. Rising sea levels are also contributing to higher storm surge — the most destructive element of tropical cyclones.

A major United Nations climate report released in August warned that nations have delayed curbing their fossil-fuel emissions for so long that they can no longer stop global warming from intensifying over the next 30 years, leading to more frequent life-threatening heat waves and severe droughts. Tropical cyclones have likely become more intense over the past 40 years, the report said, a shift that cannot be explained by natural variability alone.

Ana became the first named storm of the season on May 22, making this the seventh year in a row that a named storm developed in the Atlantic before the official start of hurricane season on June 1.

In May, scientists with the National Oceanic and Atmospheric Administration forecast that there would be 13 to 20 named storms this year, six to 10 of which would be hurricanes, and three to five major hurricanes of Category 3 or higher in the Atlantic. In early August, in a midseason update to the forecast, scientists continued to warn that this year’s hurricane season would be an above average one, suggesting a busy end to the season.

Last year, there were 30 named storms, including six major hurricanes, forcing meteorologists to exhaust the alphabet for the second time and use Greek letters.