Raleigh, N.C. — Black ice lingered on many central North Carolina roads Friday morning, two days after a winter storm dumped as many as 12 inches of snow in some parts of the state.

North Carolina Highway Patrol troopers responded to more than 3,000 collisions across the state since the storm began on Wednesday, including 166 over the last 24 hours in the Triangle area, said Sgt. Michael Baker. Baker said many roads have been cleared of snow and ice, but secondary roads are still posing problems for drivers.

"The major roads do look great," Baker said. "Our hats are off to DOT workers who have been working around the clock to clear those interstate roadways and primary roadways."

Baker said there were no major, serious injuries to report overnight as troopers responded to more crashes. But he cautioned drivers about the lingering threat of black ice on the roads.

Two drivers were injured Friday morning in a head-on crash on an icy Lake Wheeler Road in Raleigh, troopers said. Both people were taken to a local hospital. 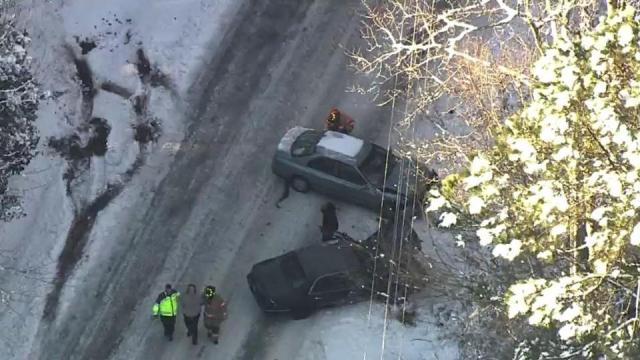 "We're just asking motorists that if they do find themselves getting out, to please be cautious," Baker said. "The secondary roadways are still presenting problems as we dealt with black ice, and that's going to continue to be an issue throughout the morning hours."

Steve Abbott, a spokesman for the North Carolina Department of Transportation, said Friday that the primary roads were mostly cleared, but there was still "a lot of work left to do."

"The rural roads, the neighborhood roads, and we're even bringing people in from other parts of the state to help do that," Abbott said. "Of course, Mother Nature is going to be our best friend today."

Temperatures, which were in the 20s early Friday, are expected to rise later in the day into the upper 40s with plenty of sunshine to help melt what snow and ice remains, WRAL meteorologist Elizabeth Gardner said. The mercury was expected to climb to the upper 50s on Saturday and break 60 on Sunday.