Raleigh, N.C. — A North Carolina State Highway Patrol trooper was on his way to work on Monday when he was happily called upon to be a doctor.

"We investigate the worst, the baddest of the baddest accidents that occur on the highway," he said. 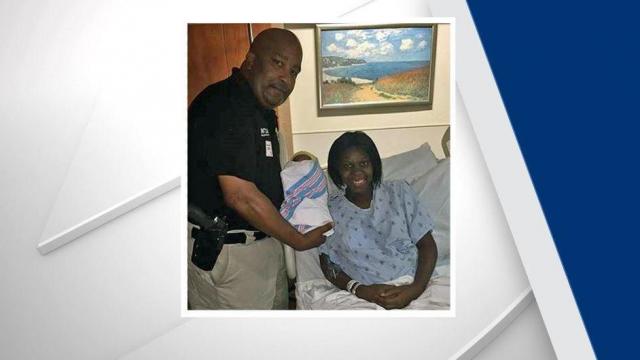 As Johnson was on the way to his next accident at about 7:30 a.m., he noticed a silver car in the median, near Capital and Highwoods Boulevards. A man was waving him down.

"He was yelling, 'I need help. My daughter is having a baby,'" Johnson said. "And I jumped out of the car and went over to the vehicle and immediately called for assistance from our communications center and went back to my car to retrieve some gloves."

He said once he came back, the baby was there.

And while the baby's mom and grandfather were screaming, the baby was not breathing.

"I unwrapped the umbilical cord from around the neck and I hold the baby and I can hear the fire and EMS crews coming. It didn't make any noise, but I could see it breathing. It was moving," he said.

And moments after that, the paramedics were on the scene to cut the cord.

The baby and mother were taken to a local hospital by ambulance.

Johnson visited with the mother and baby Achilles on Monday afternoon. Both are doing well.

"Normally there are fatals involved, this was very refreshing to see a life come into this world," Johnson said.