Raleigh, N.C. — A trio of two-legged Chihuahuas has passed away while under the care of a Raleigh-based rescue group.

Cause For Paws shared the sad news on Monday that all three puppies passed away suddenly, citing "failure to survive" as the reason.

The puppies, named Wobbles, Bobble and Scooter, were born on Feb. 7 with a genetic disorder that was passed down from their parents, which caused them to be born without their two front legs. Cause for Paws worked with veterinarians to care for the puppies, which suffered since day one.

“I am grateful for the outpouring of support pulling for these tiny pups, and know that my sadness is shared by so many,” said CFP Program Director Nicole Kincaid, who was fostering the trio. “Our rescue is not afraid to take on the hard medical cases—recognizing that imperfection is perfection. We looked past their physical problems and saw hope. However, the pups just had too much going against them to stay in this world very long.” 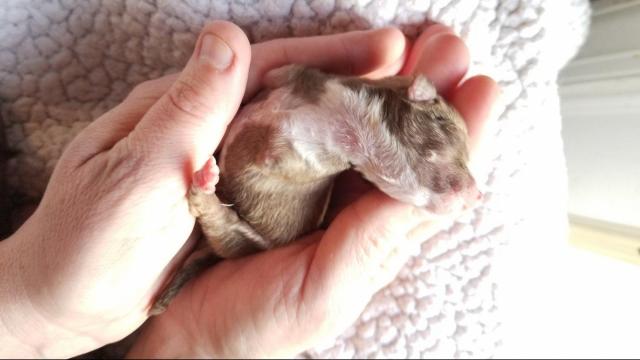 It's an incredibly sad ending for Kincaid, who had hoped the babies would get strong enough and old enough to pull themselves around and walk some.

Once they gained strength, the rescue planned to teach the pups to use special wheelchairs and help find their forever homes.

“We hope their passing sparks the talk about how important it is to spay and neuter your pets,” said Kincaid. “This was an accidental litter where the owner thought she could keep them separated while the mom was in heat. We regularly hear this belief about why people do not alter their animals, and more often than not it ends up with an unplanned litter of pups.”

Two sisters, which have minor deformities but still have their legs, survived, and the puppies' mother, Gidget, is on antibiotics after having surgery to remove her infected tissue.