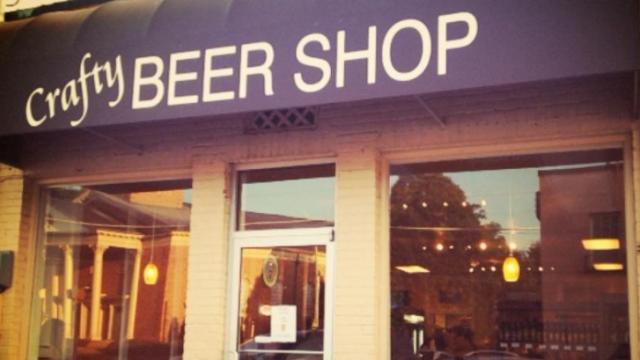 Raleigh, N.C. — Crafty Beer Shop in Lafayette Village in north Raleigh will be holding its grand opening celebration Saturday. From noon to 11 p.m., there will be raffles, giveaways and beer! Sixteen of North Carolina's craft breweries will also be on hand throughout the day.

And if you are in Cary on Saturday you might want to swing by the PDQ there. Owners are celebrating the restaurant's first anniversary from noon to 8 p.m. with free food, games, and entertainment for the whole family.

Leli's Diner is moving into the old Davinci's space off of Rogers Road in Wake Forest. The sign went up over the weekend. Owner Joseph Leli told me that they will serve farm to table modern diner classics. They hope to open on or around Sept. 1.

The Stag's Head, a taproom and bottle shop off of Glenwood Avenue in Raleigh, opened its doors this week.

Congrats to Cafe Anar, which celebrated its grand opening this week in the old home of Moustache Cafe off of Factory Shops Road in Morrisville. This restaurant is serving up Mediterranean and Central Asian gourmet cuisine.

Another opening this week: Freddy's Frozen Custard and Steakburgers opened this week off of Watkins Road in Durham, Triangle Business Journal reports. They are also planning to open a second Triangle location in Cary.

Triangle Food Guy reports that Cafe 121 chef and owner Gregory Hamm new venture, P.G. Werth's, will not open until late October. It will be located at 927 W. Morgan St. in downtown Raleigh.

In Chapel Hill, a new restaurant is coming to the Harris Teeter shopping center off of Chatham Downs Drive. Fig & Honey will offer food, classes and catering, according to its website. Heba Salama and Ed Brantley, stars of "The Biggest Loser" season six, plan to open the restaurant in the fall.

Also in Chapel Hill, The Egg & I will be moving into the East 54 development, TBJ reports. This will be the first Carolina location for the breakfast, brunch and lunch chain. No word on when they will open.

The upscale burger joint, Burger 21, is headed to Morrisville. TBJ said the franchise is planning to open in summer 2015. Burger 21 was created by the same people who founded Melting Pot Restaurants. In addition to burgers, they also serve chicken, seafood and vegetarian items.

In downtown Raleigh, Boulted Bread has officially opened its doors to the public at 614 W. South St. They are serving Wednesday through Friday 7 a.m. to 5 p.m. and 8 a.m. to 5 p.m. on Saturday and Sunday.

Some Apex news from Triangle Food Guy and Triangle Explorer John Huisman: The Blistered Pig Smokehouse is coming to downtown Apex. The restaurant's website says they are planning to open in late October.

One move to note: Chapel Hill Magazine reports that Time-Out on West Franklin St. in Chapel Hill is closing on Sept. 1. They plan to relocate to the former home of East End at 201 E Franklin St. The location, expected to open only a few days after the old place shuts down, will serve the same menu and basically be the Time-Out that people know and love. They will also be opening an express location inside the Time Out Sports Bar and Restaurant on Fordham Boulevard.