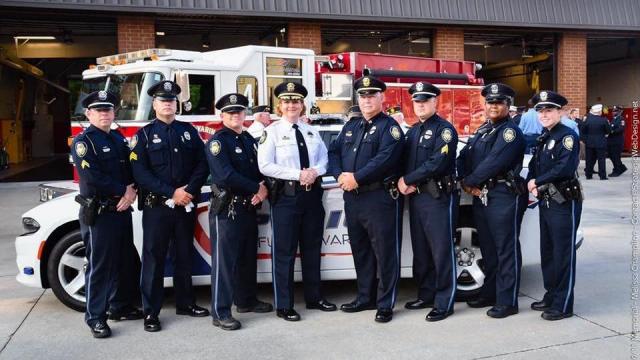 The title of police chief is not handed to just anybody. Being a police chief requires hard work, years of experience on the force and demonstrated leadership skills.

As Fred W. Rainguet and Mary Dodge described in a research article examining police chief tenure and turnover, "The job of police chief in the United States represents perhaps one of the most visible and volatile positions in the public sector. Police organizations and their chief executives have an incredibly diverse and challenging set of duties. Police chiefs must successfully meet the demands of community members, politicians, organizational members, unions, police associations, special interest groups and their own executive staff members."

Adding to an already complex role is the current political climate and. in some cases, a public demand for police reform. Put simply, aspiring to be a police chief is not for the faint of heart.

In the Triangle, several departments are ushering in new leadership, using retirements as an opportunity to cultivate a new generation of police chiefs who will continue to serve and protect, while also bringing new ideas to the table.

One of these chiefs is newly appointed Zebulon Chief of Police Jacqui Boykin. Boykin assumed her new role in November 2020 after serving as a police captain for the Knightdale Police Department for six years. Before that, she served for 18 years in the Wilson Police Department.

"I am honored to be selected as the next Police Chief in Zebulon," Boykin told the Johnston County Report. "I've been fortunate to have been surrounded by progressive, caring, genuine leaders who are committed to professional policing and focused on working with the community. I look forward to seeing how that philosophy blends with and builds upon the partnerships already established between Zebulon Police and the community we serve. Zebulon has some amazing officers, with hearts for service and love for community. I'm excited to be a part of Zebulon."

Despite her decades-long career in law enforcement, Boykin did not always have her sights set on being an officer.

"This isn't something that I always wanted to do. I think most of the people who knew me from middle and high school would be shocked to find out that I went into law enforcement," said Boykin. "I started as a psychology major in college. During the second semester of my junior year I had a friend who was in the police academy and his studies seemed a whole lot more interesting than mine. So I changed my major."

The excitement of the job is what inspired Boykin initially, but her "servant heart" is what has kept her going.

"The varied work responsibilities — you never go to work and do the same thing twice," she said. "But it was much later in my career that I recognized that I had been called to this profession. I felt and feel now that even though I was looking for excitement when I was young, the older me recognizes that it was absolutely a profession that you're called to do."

Boykin will continue fulfilling her life's calling through its newest chapter — as police chief. The role is a feat for anyone, but especially for women like Boykin in a male-dominated field.

While she may be new to the role, she is not new to policing and sees the role as an opportunity to support and mentor younger officers.

"I may be part of a new generation of chiefs, but I've been in law enforcement for 25 years. So I'm one of the old guys now and it's my responsibility to mold and craft the next generation that will be caring for me and my community when I'm not doing this anymore," she said.

Boykin admitted the expectation for police officers today is a lot different than it was 10 years ago.

"There is more of an expectation from society that we remove the mystery of policing and create more transparency in how we do business," she said. "The nature of policing has changed. Being someone who is experiencing it — there must be a shift in how police services are taking place. You need defined leaders who can identify these shifts and then set the course for the entire department with a vision in mind for the future."

Additionally, Boykin said it's important officers understand only half of what they do is law enforcement. The other half is community engagement and relationship building.

Finding new officers who can succeed at these key responsibilities is critical. It is why Boykin is a chief who believes in hiring for character and training for competency.

"When hiring, I'm looking for someone who has a servant's heart who feels called to give back to the community. I'm looking for somebody who genuinely wants to see their community become better. I'm interested in finding people who have a desire to coach youth sports, volunteer at a retirement community or read in schools. I'm looking for people who have a passion for others," said Boykin. "Then I teach them how to write an awesome report and how to do exceptional investigations and to improve their skills with shooting a firearm and how to drive a police car. We're looking for people who are trustworthy, have integrity, who are professional and family oriented."

Boykin represents a changing profession that is acutely aware of public perception and its duty to uphold the responsibilities of the roles they occupy.

"I recognized early on that I could be very successful in this career, but not at all by my own doing," Boykin finished. "It's a result of influences by people who I think are just absolutely amazing who have taught me a lot of things along the way. And I can only hope that I get to influence others in the same manner that others influenced me."