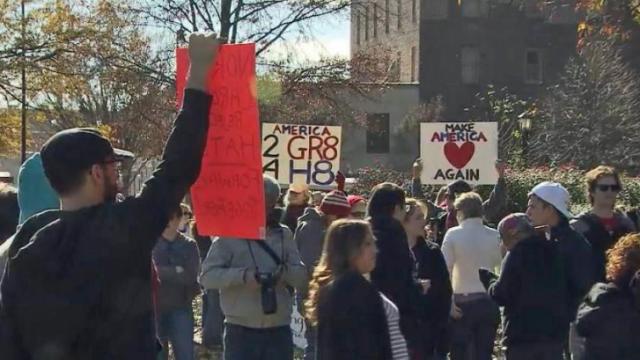 Raleigh, N.C. — Shortly after the election, the Ku Klux Klan posted about holding a parade Saturday, but never announced a location or time.

Anticipating a parade, the Triangle Unity May Day Coalition, which is made up of grassroots organizations from around the region, organized a rally in downtown Raleigh. Exercising their first amendment right to protest, hundreds gathered in opposition of the KKK and President-Elect Donald Trump.

At Moore Square, people assembled to speak out about speech they described as hateful, divisive and gaining in currency since the election.

Heather Hester heard about the rally on social media and brought along her 12-year-old daughter, Maria, to demonstrate the importance of speaking out.

She said it’s the “old, white men” who feel they are the ones under attack in a diversifying country.

The crowed exercised their freedom of speech on signs, which read: "No hate in our state" and "Build bridges not walls."

Speakers expressed their concern and energized the public to keep speaking out for causes they feel are important.

With the election being over, the elected next president is a man demonstrators said has stoked old prejudices, making the country hot with anger. Kim Koo of Rocky Mount said that makes it all the more important for people like her to assemble.

“We are not as powerless as everybody thinks we are. If we get together like what we’re doing today, we can be a powerful force. That will change the country,” Koo said.

Many people who have been angry since the election said the rally gave them an opportunity to peacefully voice their anger or concern.

I’ve been trying to find things I can do peacefully, and this seems like a good way to show up and support what’s going on,” protester Ben Rauscher said.