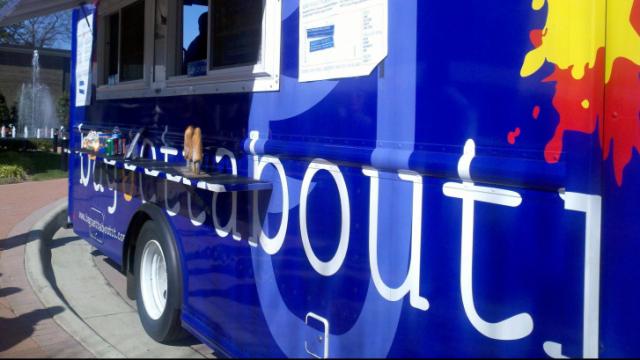 By The Wandering Sheppard

Raleigh, N.C. — Last week, Pho Nomenal Dumpling (formerly Dump Pho King Truck) was found filming the upcoming season of the Food Network’s Great Food Truck Race. It seems the camera’s eye is focusing on the Triangle. This weekend, the Got to be NC Festival saw actor and star of the TV show "Black-ish" Anthony Anderson filming for his Food Network show, “Eating American with Anthony Andersonm."  He was seen talking to the folks behind popular Triangle food truck Baguettaboutit, which is known for its baguettes, sausages, and tailored sauces.

Last Friday, we reported Gussy’s Place grand opening will be on Tuesday, May 26. This will also be the first day the restaurant opens. The operating hours will be workdays during lunch. While the hours will revolve around lunch-time, Tuesday will have extended hours to give everyone an opportunity to visit the first day. From my first peek from the outside in, I am excited to eat a gyro pita locked on the mural of the Greek Isles.

Compass Rose Brewery has opened at in north Raleigh. It is located at 3201 Northside Drive on Gresham Lake just north of I-540. Currently, the taproom’s taps are other beers; though most are local to North Carolina and familiar to Triangle beer fans. In addition to the beer, they are also scheduling food trucks and live music. The brewery is open daily from noon to midnight.

Where to find food trucks this weekend:

Northgate Blues on the Plaza on Friday will have E-train and The Rusted Rails performing with food trucks Chick-N-Que and Snowie serving.

It’s the Fourth Sunday coming up which means Pop-Up Sunday at Ornamentea. Food trucks are usually parked for this pop-up market with crafts and local artisans.

Also if you haven’t done so, be sure to nominate for your favorite food truck and other favorites in the inaugural Voters’ Choice Awards here on WRAL.com.

The Wandering Sheppard aka Arthur Sheppard covers food truck news in the Triangle on his blog WanderingSheppard.com.