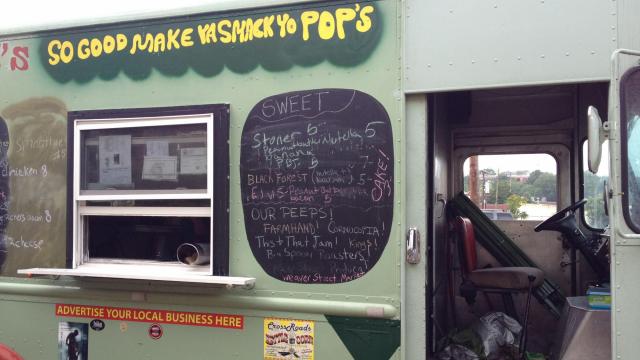 By The Wandering Sheppard

It looks like the last of the taping of the Great Food Truck Race took place last week. This upcoming season will focus on food trucks battling it out from Santa Monica to Chicago focusing on Route 66. Local food truck Pho Nomenal Dumpling, which specializes in pho and dumplings, competed this year. Local fans will have to keep an eye on Food Network to see how they did.

This past weekend was the 2nd Annual NC State Food Truck Championship. This year a few Triangle food trucks were among the 50 competing for the title in Randleman. In addition to their regular menus, food truck chefs had to prepare a dish using a secret ingredient - peaches!

Also, local food trucks will have a meeting Monday about forming a trade association. Food trucks owners should meet at Gussy’s Place, 2945 S. Miami Blvd in Durham, at 6:30 p.m.

Park-It-in-the-Market will take place in Holly Springs’ Farmers Market. This food truck rodeo will coincide with the town’s market this Saturday, June 27.

Commune Day takes place Saturday in Rougemont, NC. The event’s theme focuses on the inter-connectivity. With that theme, Arepa Culture, SoomSoom Pita Pockets and The Parlour Bus will be paired up with local farms to produce special menu items for the event.

For those heading to the Crystal Coast this weekend, be sure to check out Highway 58 and Motel Drive for the area’s first annual food truck rodeo.

It’s the Fourth Sunday of the month, which means Pop-Up Sunday at Ornamentea.

Be sure to vote for your favorite food truck in the 2015 Voter’s Choice Awards.

The Wandering Sheppard aka Arthur Sheppard covers food truck news in the Triangle on his blog WanderingSheppard.com.