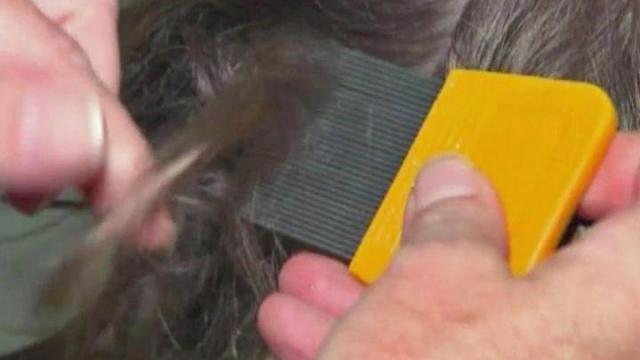 Brooke Bissinger might just be every mom's new best friend - at least during those days and weeks of dealing with a case or more of head lice.

Bissinger, a Triangle mom of two and a director of research and development for Morrisville-based firm TyraTech, is behind a new non-toxic, pesticide-free lice treatment that promises to kill 100 percent of both the lice and the eggs in 15 minutes.

No nit picking necessary, except for looks to remove the dead bugs and eggs. No retreatment required, according to the company. (And so far, knock on wood, I haven't had the opportunity to test it).

Vamousse Lice Treatment is available at Walmart, where it's been flying off the shelves across the country since it went on the market in April. The treatment and a new shampoo, Vamousse Lice Prevention, which is designed to prevent head lice, also will be on sale starting Monday on Amazon.com.

TyraTech is a life sciences company focusing on nature-derived insect and parasite control products. Bissinger said the firm works to develop non-toxic versions of consumer products. A treatment for lice, a scourge for kids ages 3 to 11 and (interestingly enough) college students, fit the bill especially as traditional pesticide-based options are no longer working.

According to the Centers for Disease Control and Prevention, an estimated 6 million to 12 million lice infestations occur each year in the United States among children ages 3 to 11. But more and more parents are finding that those critters don't leave after treatment with common, over-the-counter, pesticide-based treatments that have been used for years.

A recent article in the Journal of Medical Entomology found that 84 percent of head lice across the United States are resistant to the active ingredients found in common pesticide treatments. It also found that pesticide resistance in lice is on the rise. Nearly 100 percent - 99.6 percent - of lice sampled in the United States and 97.1 percent of lice sampled in Canada from 2007 to 2009 carry genes for resistance.

If you have a preschooler or grade schooler at home, there's a good chance that, like me, you've heard the horror stories from other parents who have spent weeks and months treating lice infestations, nit picking and spending more than a few dollars on multiple treatments, prescriptions and even professional nit pickers.

A couple of years ago, I spent more than a week treating and painstakingly nit picking the head of one of my daughter's during a bout with the parasites.

Those pesticide-based treatments "have just been used so much that lice have developed resistance to them," Bissinger said. "It's definitely a major problem."

Vamousse is different from other treatments on the market. Instead of a shampoo, it's a mousse. The treatment is applied to dry hair by rubbing it in until the hair is completely saturated. It's left on hair for 15 minutes and then washed out with regular shampoo. You typically need just one bottle to treat a head of hair. Bottles are $20 each.

Vamousse uses sodium chloride - also known as salt - to dehydrate and kill lice. Vamousse's formula removes the fats from the outside of the lice so the salt can get in and kill them, Bissinger tells me.

Unlike most other treatments on the market which kill just the lice, Vamousse kills both the live lice and the eggs. Nit picking is still recommended to get rid of the dead lice and nits.

The shampoo, which should be available in a few weeks, will kill just the lice. It's designed for siblings, friends, teammates or classmates of those with a lice infestation, Bissinger said. It's something you'd pull out if your child brought home the dreaded lice letter from school, for instance, but you didn't find any lice or eggs on his head.

Bissinger knows all about those lice letters. Her kids - ages 1 and 4 - have both brought them home from day care after lice were found on a classmate. And she's gotten frantic calls from friends and friends of friends who are desperate when that first louse is found.

"You have to remind parents that it's not your fault," she said. "Anybody can get head lice. It doesn't mean you're dirty. It's just a part of life."

And now we have a new weapon in the fight.