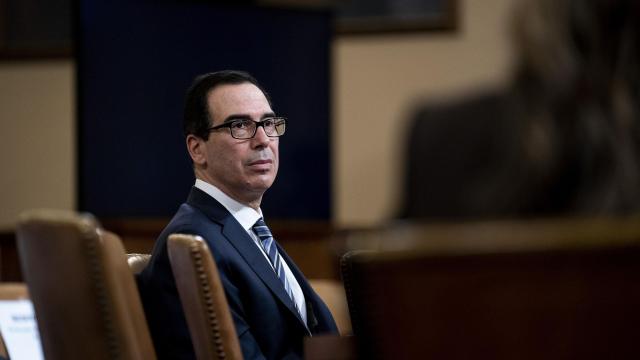 WASHINGTON — Treasury Secretary Steven Mnuchin on Friday refused to comply with a congressional subpoena to hand over President Donald Trump’s tax returns, a move that is likely to be the final step before the matter heads to the courts.

For more than a month, the Treasury Department and House Democrats have exchanged letters about the request, which was initiated in April by Rep. Richard Neal, D-Mass., chairman of the House Ways and Means Committee.

Mnuchin said lawyers in the department concluded that the original request, made using an obscure provision of the tax code, was not legitimate. Neal changed course last week and issued a subpoena to try to gain access to six years of Trump’s personal and business tax returns.

On Friday, Mnuchin wrote a one-page letter to Neal, in which he reiterated his previous position that the request lacked “legitimate legislative purpose” and said he could not comply with the subpoena.

“For the same reasons, we are unable to provide the requested information in response to the Committee’s subpoena,” Mnuchin said.

Mnuchin was widely expected to ignore the subpoena, as Trump has vowed to fight all subpoenas from House Democrats. The Treasury secretary has warned that allowing House Democrats to retrieve the president’s tax returns would open the door to lawmakers from both parties politicizing the IRS in the future.

At a Senate hearing this week, Mnuchin said that House Democrats were trying to “weaponize” the IRS. He said that he had not yet decided how he would respond to the subpoena, but that “you can guess which way we are leaning.” He said the judiciary, as the third branch of government, would most likely need to settle the dispute between Congress and the executive branch, signaling the potential for a protracted court fight.

House Democrats have been weighing how to respond to the Trump administration’s defiance of congressional subpoenas. On Friday, Neal made clear his preference for avoiding retaliatory threats, to the disappointment of several of his more liberal colleagues.

Neal told reporters he saw little value in trying to hold Mnuchin or Charles Rettig, the IRS commissioner, in contempt of Congress. Instead, he said, he would go straight to the courts to try to enforce his subpoena, potentially as soon as next week. The case could take months or years to resolve.

“I don’t see what good it would do at this particular time,” Neal told CNN, when asked about the possibility of contempt proceedings. “I think if both sides have made up their minds, better to move it over to the next branch of government, the judiciary.”

That did not sit well among Democrats on the Ways and Means Committee, who have consistently pushed a more aggressive approach toward getting Trump’s returns. Rep. Bill Pascrell Jr., D-N.J., argued Friday that the committee should still consider fines and other possible forms of punishment for defying the subpoena.

“What this does, going to court, is absent the Congress from their own responsibilities,” Pascrell said. He added, “I think that’s a very dangerous position for us to be in.”

Neal issued a statement on Friday arguing that he had clear authority to issue the request, and vowing to seek other means to guarantee that the administration follows the law.

“The law, by its terms, does not allow for discretion as to whether to comply with a request for tax returns and return information,” Neal said. “Given the Treasury secretary’s failure to comply today, I am consulting with counsel on how best to enforce the subpoenas moving forward.”