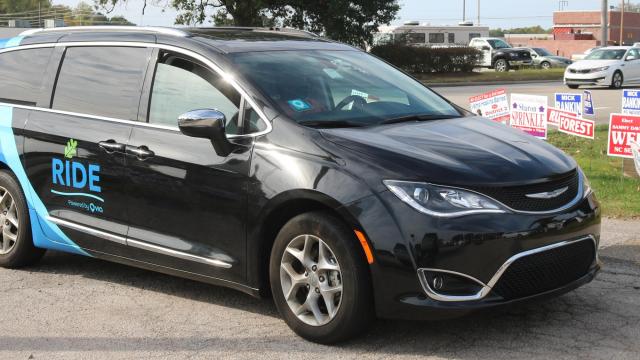 Whether buses, subways, or rideshare apps, transit services are a key component to the success and quality of life of communities. While the City of Wilson already had a public transit system, the city is bringing innovation to the sector, launching a new chapter in transit services.

RIDE, powered by Via, is an on-demand ridesharing service and the latest in a series of Smart City innovations the city has undertaken.

The service, launched at the beginning of September, is a blend between apps like Uber or Lyft and a public transit system.

By either using an app or calling in, passengers can arrange a ride, get picked up outside of their current location, and share a trip to their location with passengers headed in the same direction. The cost of each ride is $1.50 for a single passenger and an extra $1 for an additional passenger. Children eight years old and younger can ride for free.

"In the month and a half or so since we started, we've already reached 300 rides a day. Our goal in starting it was to provide better efficiency of service and to reduce the amount of time that people were waiting on the regular, fixed-route service," said Gronna Jones, transit manager for the City of Wilson. "Since the initiative started, we received a Federal Transit Administration grant to assist with the service. Our goal is to use those extra dollars to expand the service, but it's been phenomenal so far."

The program's service route stretches across Wilson, from Lake Wilson to the north to just above Highway 264 to the south. Currently, Via provides 10 vehicles for the fleet that operate from 7 a.m. to 6 p.m. Monday through Saturday.

RIDE is just the latest addition to Wilson's Smart City initiative. In implementing smart versions of utilities like stormwater meters and trash cans, the city aims to blend forward-thinking innovation and small-town charm for a one-of-a-kind living experience

"In a community like Wilson, we want to strive to be the best of both worlds — making sure that we maintain the classic quality of life that's always been a hallmark of the community while also not missing out on any of the modern conveniences," said Will Aycock, general manager at Greenlight Community Broadband for the City of Wilson. "Whether you're talking about the next generation of broadband to our smart grid for delivery of city services to the new transit program, it's all about making sure that the amenities and the livable experience in the community matches anything you might expect in a more urban area, while maintaining the charm and quality of life we've always had."

From the combination of art and science at Vollis Simpson Whirligig Park to the free public wifi afforded by the gigabit network Greenlight, Wilson is certainly living up to its name as a Smart City.

In addition to the RIDE program, the city also has the second round of the RIoT Acceleration Program on the horizon. Run by the Raleigh-based Internet of Things organization, RIoT's goal is to support and cultivate technology startups in eastern North Carolina.

With support from both the city and those in the community, Wilson is well on its way to cementing itself as an innovation hub that rivals even the Triangle region — all without sacrificing the quintessential small-town lifestyle.

"These smart technology and smart city initiatives each add to that bundle of quality of life amenities, allowing people to live a very urban lifestyle, even in a community in eastern North Carolina," said Aycock. "The reason that we make all these investments and bring all these Smart City services here is to make ourselves accessible to startups, innovators and entrepreneurs. We welcome people from all across the country to come here and participate in our accelerator program with RIoT — and understand that the amenities like RIDE are here and available for them when they do come."