Training, timing contribute to rescue after worker trapped in trench at NCCU

Durham, N.C. — One of the firefighters who scooped dirt carefully Tuesday to rescue a worker trapped in a trench described the scene as "controlled chaos."

"We do go through training for instance like this," Capt. Marty Pearce of the Durham Fire Department said.

Pearce's unit was training near North Carolina Central University on Tuesday morning when the call came about a worker trapped. 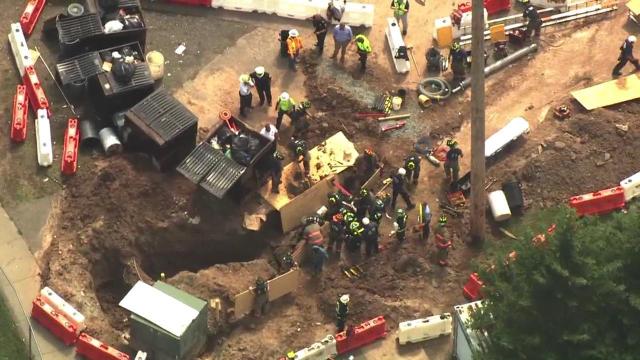 Firefighters trained in urban rescue used shovels and buckets to dig at the dirt around the man's legs in an effort to free him. After about an hour, the man was pulled from the trench and taken on a stretcher to an ambulance.

"Time is absolutely of the essence," Pearce said. "There is a sense of urgency, but it’s also controlled. We are focused on a job and a rescue at hand. The time that it takes to think about nerves or excitement really is there. We focus on the job that we have."

Pearce said his team could work quickly because construction workers helped to provide materials to shore up the hole to allow firefighters access to the trapped man.

Casey Jones, a representative of the development company Corvias which is building three residence halls for NCCU, said a man working in a ditch was trapped when it collapsed and a piece of cement fell on his legs.

Authorities did not immediately release any information about the man, his condition or specific injuries. He was conscious throughout, they said.

Ayana Hernandez said the university has a number of on-going construction projects this summer. Tuesday's accident happened just outside O'Kelly–Riddick Stadium, the on-campus football field, at the future site of a residence hall, she said.