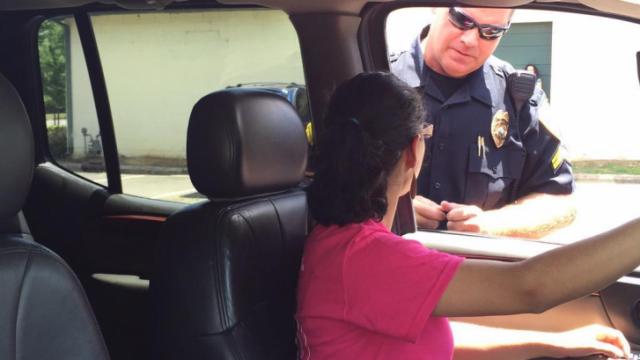 Apex, N.C. — Any traffic stop is scary – for the driver, who may have done something wrong, and for the officer who doesn't know what to expect.

While most drivers can adopt common-sense tactics to defuse that tension – communicate clearly and politely, keep hands visible, stay in the vehicle – those with disabilities or special needs face an additional challenge. This weekend in Apex, those drivers can get special training to help them anticipate and ease some of the anxiety of a traffic stop.

Twenty-year-old Kyla Ponciano has cerebral palsy and is unable to drive without her mother present, but, after Police Encounters training, she hopes to get her license soon.

"She really wants her independence, and she says this one way to get it," her mother, Sheryl Ponciano, said.

Trainer Michael Macario, of the Raleigh Police Department, counseled Kyla Ponciano to tell an officer about her disability and the fact that it might delay her responses and reactions.

Without that information, police could assume she was drinking or otherwise under the influence.

"I feel somewhat normal, but not as normal as other kids," Kyla Ponciano said. "I might be a little delayed I guess."

Macario, who also owns Life Protection Skills training center in Apex, said he got the idea to create the course after one of his martial arts students was nervous and needed some instruction about getting stopped by a police officer.

"If you're dealing with a special need or a developmental disability, it could even be a tougher situation just to get the basic information out to the officer," Macario said. "It could be a slight delay in communication. It could be a slight fine-motor skill delay."

He also worked with Matthew Mullen, a 16-year-old driver who has autism. Mullen's father was worried that a simple request like asking for his license could confuse his son.

During training, Mullen asked Macario how to signal to an officer that his wallet and license were in a back pocket.

"You can unbuckle and say, 'It's in my back pocket. Would it be OK for me to get it out now?'" Macario said.

They also discussed staying calm while an officer runs the license.

"It may seem, Matthew, like he's back there for a long time," Macario said. "It doesn't mean anything. He's just checking to make sure your license is OK."

Mullen's father, Robert, said the training could benefit any driver.

"It's a nervous, anxious time anytime somebody is stopped in a traffic situation," he said. "It's hard to rehearse, so I think it's a great program as a parent for a kid to get that chance to practice."

Parents say the training is a confidence boost for their young drivers and an opportunity for police officers to get a better understanding of how a driver with special needs might react.

"It makes it easier on us because we know what we're dealing with," Apex Cpl. Michael Price said.

The free Police Encounters training session will be offered Saturday at the Life Protection Skills facility, 737 Center St. in Apex, from 12:30 to 2 p.m. It is open to any any special needs individual who drives or plans to drive an automobile and has anxiety about the possibility of an encounter with police.