Wake County, N.C. — Law enforcement authorities were warning Triangle residents to stay off the roads if at all possible because secondary roads were treacherous.

North Carolina Highway Patrol Sgt. Michael Baker told WRAL News shortly before 8:30 a.m. that primary roads, including Interstate 40, had been treated and were passable but other roads leading to neighborhoods posed hazards.

"The secondary roads are primarily the trouble spots," Baker said. "We're asking people to stay at home and enjoy each other and their families if at all possible."

At least a dozen vehicles were involved in a slip-and-slide accident in Durham near the intersection of Roxboro and Infinity roads. No injuries were evident, and many drivers were outside their cars, walking around and surveying the damage after a quarter-mile slide on a hill.

Police temporarily blocked off the area as a result of the multi-car crash, and one woman said the pile-up prevented her from getting home Thursday morning.

"When I got here, there were about 15 cars packed across this road so I called my husband [to say] that I was scared to drive. There is no space given to drive through, so I've been sitting here for almost two hours and I've been calling him to come pick me up," said Patience Mensah. 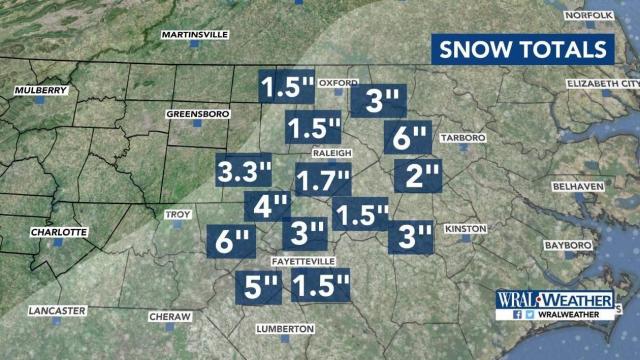 Residents said Roxboro Road is one of the more dangerous areas when snow falls in Durham.

Steve Abbott, assistant director of communications for the North Carolina Department of Transportation, said his crews would work through clearing those secondary roads Thursday.

The North Carolina Highway Patrol responded to 700 collisions and 300 other calls for service during the storm.

In Orange County, the sheriff's office reported roads covered with a coat of ice and snow.

Abbott said that sun and salt will start the melting process, even though the temperatures will stay around the freezing mark through Thursdays.

"During the day, it will melt quite a bit," he said. But he warned that the continuing cold temperatures mean a re-freeze overnight.

"When the temperature starts dropping, we'll get to a point where salt and salt brine won't be effective. Then we will switch to salt and sand for traction," Abbott said.

The DOT prioritizes clearing major roads, including interstates and U.S. and N.C. highways, then moves its efforts to secondary streets like Western Boulevard in Raleigh. In a snow event, it can take days for crews to turn their attention to neighborhood streets. The agency said Wake County alone has 456 lane miles of interstates, 642 miles of U.S. routes, 427 lane miles of state routes and 4,305 lane miles of secondary roads.

@wraltraffic In Hope Mills at the end of Dundle Rd. Where it meets Strickland bridge rd. Is really icy. It’s a hill up Dundle onto Strickland bridge and at least 3 cars are in the ditch. Avoid that please it’s dangerous