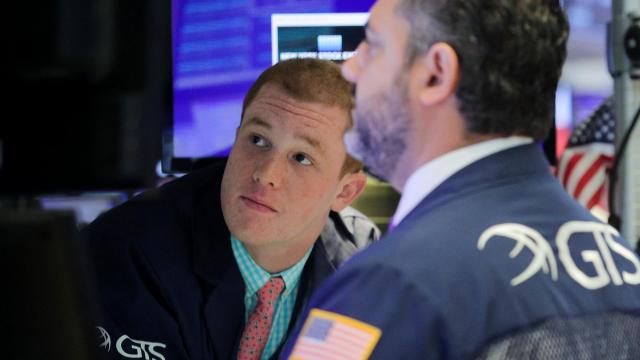 CNN — Stocks finished lower on Wednesday, ending in the red for the second day in a row after trade worries bubbled back to the surface.

It was the worst one-day percentage drop in more than three weeks for the S&P, according to Refinitiv.

President Donald Trump said during a cabinet meeting on Tuesday afternoon that he could impose further tariffs on Chinese imports. The trade war hasn't been at the forefront of investor worries since Trump and China's Xi Jinping agreed a tariff truce at the G20 summit last month.

Investors are weighing the resurfaced trade worries against expectations of a Federal Reserve interest rate cut in two weeks.

The Fed's Beige Book described the US economy as modestly expanding, but also talked of widespread concerns about the impact of tariffs.

Oil prices settled 1.5% lower at $56.78 a barrel, according to CME, after a larger-than-expected inventory buildup reported by the Energy Information Administration pushed prices down. While crude oil inventories fell, gasoline and distillates inventories rose more sharply than expected.

Oil started the day rebounding from Tuesday's 3% drop. Secretary of State Mike Pompeo said Tuesday that Iran was ready to come to the negotiating table again. If Iranian oil was available for purchase without the threat of sanctions again, prices would decline on the added supply.

The US dollar is slightly weaker, with the ICE US Dollar Index down 0.2%. Nevertheless, the buck touched a fresh high against the British pound earlier.

Sterling was dragged lower by Brexit uncertainties and traded at its lowest level since April 2017 earlier. The pound since rebounded, last buying $1.2432, up 0.2%.