Torrents of Water in Towns Across the Carolinas. And a Guy With a Boat. 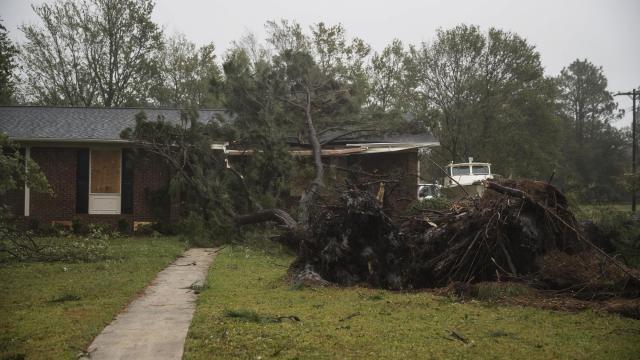 WASHINGTON, N.C. — As the flat-bottomed fishing boat crept into a swirling river that had once been Summer Haven Lane, Tray Tillman scanned the brown floodwaters and half-submerged houses in search of somebody to save.

Tillman, 26, a construction foreman, was part of a makeshift rescue flotilla that has plucked hundreds of stranded people from attics, second-floor bedrooms, church vestibules and crumbling decks as relentless, record-setting rains from Tropical Storm Florence flood rivers across the Carolinas and send torrents of water through downtowns miles away from the coast.

Inland flooding is perhaps the biggest continuing danger as Florence trudges through the Carolinas, and an improvised network of volunteers, some helping from as far away as Africa, has sprung up to locate and rescue people who did not evacuate. Harnett County, North Carolina, which is in the path of a river that was expected to crest overnight at 17 feet above flood stage, was one of many jurisdictions that ordered new evacuations. At least six deaths were confirmed.

“They’re used to flooding, but nothing like this,” said Dan DiRenzo, who steered the boats with New Jersey Task Force One Urban Search and Rescue, one of the teams deployed by the Federal Emergency Management Agency to North Carolina, South Carolina and Virginia.

FEMA said it had more than 1,000 workers in the Carolinas, and the Coast Guard said it had ships and search-and-rescue crews at the ready. Tennessee sent firefighters and swift-water rescue specialists, and Maryland said it would send its helicopter aquatic rescue team, including two Black Hawk helicopters, on Sunday. A team of specialists in urban search-and-rescue and medical care left with boats to North Carolina from New York City, and another team left from Nevada.

There are scores of highly trained rescuers deployed by FEMA. There are hundreds of local sheriff’s deputies and firefighters trundling through neighborhoods in their tallest trucks. There are volunteers with unofficial rescue groups such as the Cajun Navy, and monitors as far away as Nigeria searching for calls for help and posting people’s locations on crowdsourced rescue databases.

Then there is Tillman: a guy with a boat.

A former soldier, he was just a local resident who wanted to help. On Friday, he drove around Washington, North Carolina, with a metal skiff lashed to the top of his minivan, responding to pleas posted online for help. When a rescue partner who had been working with him got tired, Tillman went out alone. When he broke his outboard propeller on a piece of wood, he hunted down a replacement.

Throughout the storm, stranded residents and their families have been posting calls for help on Facebook and Twitter and crowdsourced rescue sites.

Would-be rescuers in the Carolinas used the walkie-talkie app Zello to request information on street conditions and the locations of people needing help. Volunteers outside the disaster zone scanned the internet to provide answers for them, broadcasting weather and traffic reports and even hyperlocal information. “It’s been reported that snakes are in the floodwaters around Crabtree Creek, so I would not go outside,” a moderator using the handle TrailBlaizin announced Saturday morning on one popular Zello channel. “We don’t want any of you all to get bit by something.”

A user on a Cajun Navy channel Saturday morning requested a wellness check. “I have two elderly people I haven’t heard from since yesterday,” she said, providing an address in Wilmington, North Carolina.

Another user checked in from a shelter in Wilmington to report widespread destruction, saying help would be needed.

During the disaster following Hurricane Harvey last year in Texas, volunteers and official responders often had difficulty coordinating, leading to duplication of efforts and gaps. This year, both groups recognized the need to do better. They shared information at high levels and began working together on the ground.

As the storm progressed, mounting power and cell tower failures posed another challenge to the accuracy of crowdsourcing. So, too, did the fact that some rural areas that were expected to flood in the coming days had poor baseline wireless coverage, and relatively low social media usage.

Tillman had been trying to keep in touch with faraway volunteer dispatchers on one crowdsourced rescue site. On Friday, after taking a brief break to run home and eat some tuna fish, he headed back out in search of a mother and her adolescent son who had not evacuated, and whose relatives had not heard from them.

As Tillman pulled onto a flooded street leading toward the woman’s house, he ran into a crew of volunteer firefighters who were heading to the same call. Room for one more? he asked. Why not, the Bunyan Fire Department chief said.

He climbed into a fishing boat with two firefighters, Parker Williams, 19, and Johnnie O’Neal, 46.

Williams spun the outboard motor, they shoved the boat into the water and were off, puttering through pines and the surreal brown currents of the Pamlico River, now surging into people’s kitchens and living rooms. A kayaker in camouflage paddled by in the opposite direction. A cruiser floated in someone’s front yard.

Tillman stuck an oar into the water and couldn’t find bottom.

The three men in the fishing boat poked through the abandoned neighborhood in Washington, stopping to seal off some leaky propane tanks that bobbed in the water like zeppelins.

They tried to get their bearings. Was that a street or a creek? What was the difference anymore?

“Nobody step out of the boat at anytime,” said O’Neal, whose day job is as a safety specialist. “We don’t know what’s in there.”

Was this Summer Haven Lane? They couldn’t see any signs.

They steered around mailboxes, branches, pulverized decking and other debris that could blow out the propeller. When the water got too shallow and the boat scraped bottom, the men hopped out and waded, grabbing pieces of fence post and siding to sound the depth of the water in front of them.

Finally, a blue two-story house on Summer Haven Lane emerged from the trees. As they approached, a woman’s palm pressed up against a dark second-story window.

“Hey! Can you go around to the porch so we can talk to you?” O’Neal yelled.

Laura Tedder and her son, Dylan Evans, stepped out onto the second-floor balcony. Tedder said she had not realized there had been a mandatory evacuation, but had stocked her house with plenty of food and water.

And though the churning river was lapping at the stairs to her house, Tedder said she did not want any rescuing. They had no power, but were recharging their phones with the spare power left over in her son’s laptop. They were planning to play Uno that afternoon.

“This is our home,” Tedder said. “I guess we just feel safer here. It’s pretty much flooded most places anyway.”

O’Neal asked, and asked again to make sure, but Tedder was firm.

Tillman worried that conditions were just going to get worse as the storm squatted over the Carolinas. O’Neal said that sometimes, people just don’t want to go.

“You all be careful,” O’Neal said, as mother and son slipped back into the house.

The three men pushed off from the front porch and headed back into the currents of Summer Haven Lane.