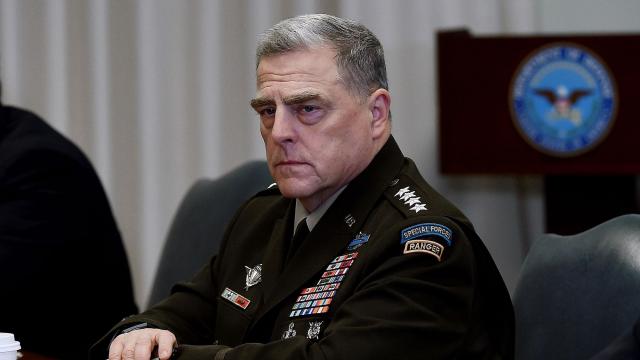 CNN — America's most senior general publicly pushed back Sunday at an announcement by President Donald Trump's national security adviser that the US will aggressively reduce the number of troops in Afghanistan by the end of the year irrespective of conditions on the ground.

Chairman of the Joint Chiefs of Staff Gen. Mark Milley was responding to comments last week from Robert O'Brien that the US would reduce the number of US troops in the country down to 2,500 by the beginning of 2021, from a current level of about 4,500, stressing that any future drawdowns would be conditions based.

"Robert O'Brien, or anyone else, can speculate as they see fit, I am not going to engage in speculation, I'm going to engage in the rigorous analysis of the situation based on the conditions and the plans that I'm aware of in my conversations with the President," Milley told NPR.

The future of the US military's involvement in Afghanistan remains clouded in uncertainty following contradictory comments from senior members of the administration.

Hours after O'Brien's comments last Wednesday, Trump tweeted that "we should have the" remaining 4,500 US troops in Afghanistan "home by Christmas," an even more aggressive timeline than the one laid out by his national security adviser.

"That was the decision of the President on a conditions-based withdrawal," Milley added in his interview, saying "The key here is that we're trying to end a war responsibly, deliberately, and to do it on terms that guarantee the safety of the US vital national security interests that are at stake in Afghanistan."

That strategic confusion comes as the Taliban launched a major military offensive against the Afghan government in Helmand Province in the country's south, an attack that prompted US military aircraft to carry out a series of airstrikes against Taliban fighters in recent days.

In February, the Trump administration signed an agreement with the Taliban that committed the US to withdrawing its troops from Afghanistan by the spring of 2021 in exchange for the Taliban meeting a series of commitments including entering into negotiations with the Afghan government and severing its ties with terrorist groups like al Qaeda.

"We're monitoring all of those conditions closely. And we're, we the military, are giving our best military advice on those conditions so that the President can make an informed, deliberate, responsible decision," Milley said.

But the conditions on the ground appeared to be deteriorating somewhat in recent days, with the Taliban launching a major offensive against Helmand Province despite the fledgling peace talks being held in Qatar.

The US military carried out "several targeted" airstrikes against Taliban fighters that were attacking Afghan forces in southern Afghanistan over the past two days, a US military spokesperson said Monday, with the top American general in Afghanistan calling on the Taliban to cease their offensive actions.

"The Taliban need to immediately stop their offensive actions in Helmand Province and reduce their violence around the country. It is not consistent with the US-Taliban agreement and undermines the ongoing Afghan Peace Talks," Gen. Scott Miller, the commander of all US and international forces in Afghanistan said in a statement.

The attack by the Taliban on Helmand's capital of Lashkar Gah appeared to be a violation of the terms of its deal with the US, with Milley saying that the Taliban had agreed to not attack major urban areas.

A US military official told CNN that the airstrikes helped repel the Taliban fighters which were unable to pierce the security perimeter around the provincial capital.

US airstrikes in Afghanistan have become rarer since the Trump administration signed the agreement in February, and while the US has continued to conduct some strikes in defense of Afghan troops, it rarely publicizes those strikes.

The Taliban offensive in Helmand and the subsequent US strikes in defense of government troops appear to signify a deteriorating situation on the ground, a development that comes amid ongoing confusion as to the future of the US military presence in Afghanistan.

Since signing the deal with the Taliban in February the Trump Administration has already reduced the number of remaining US troops in Afghanistan by more than 50%.