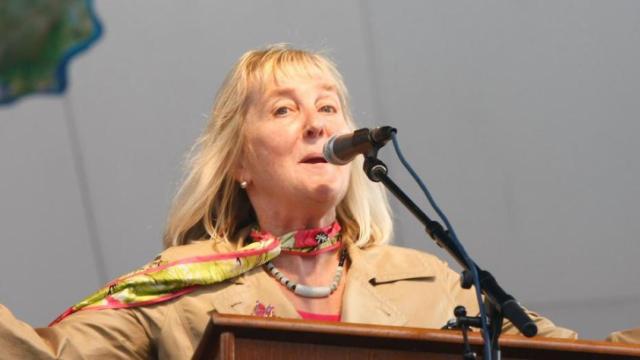 Raleigh, N.C. — The top scientist at the Nature Research Center in Raleigh is leaving her post three years after taking the helm of the science museum's new $56-million wing. The move comes four months after the museum's new director effectively demoted her.

Meg Lowman, a biologist and ecologist widely known as "Canopy Meg" for her research in forest treetops, is resigning as director of academic partnerships and global initiatives at the North Carolina Museum of Natural Sciences to take a job at the California Academy of Sciences in San Francisco. Lowman will serve as the institution's chief of science and sustainability, starting Jan. 6.

Reached by phone in New York Monday evening, Lowman said the new job takes her work with scientific research and outreach "to the next level" by overseeing more than a dozen science curators in a new Institute for Biodiversity Science and Sustainability. Part of the institute's mission is a focus on a "sustainable future," which ties in closely with Lowman's 30 years of conservation research.

"It's kind of just like this frosting on the cake," Lowman said. "We're going to be looking to make sure science is relevant to the challenges of the 21st century."

In a statement to staff members Monday evening, museum Director Emlyn Koster thanked Lowman for her contributions and wished her luck in the new position.

"The intersection of her career with the 134-year history of the remarkable North Carolina Museum of Natural Sciences has been a noteworthy one for which many are very grateful," Koster said.

When she began her work at the museum in July 2010, Lowman was responsible for recruiting a team of scientists and managing the new Nature Research Center, funded with $22 million in state money and about $34 million in private donations.

During her tenure, she oversaw the April 2012 opening of the 80,000-square-foot interactive expansion, a 24-hour event that attracted more than 70,000 visitors.

Her work put the museum on the international scientific scene in just a short time, according to museum donor and community volunteer Carol Bilbro.

"She came to our museum at a time when we had the facility, but we had to bring the community to it," Bilbro said. "Her enthusiasm just drew you in. She made you love science even if you were just a citizen."

Former science museum director Betsy Bennett, who brought Lowman on board in 2010, also praised Lowman's work in both opening the center and communicating its work to the public.

"She's been a great ambassador for science, and she'll continue to to that," Bennett said. "A lot of people make the museum successful, and Meg was certainly one of those."

Lowman said the center "opened a whole world of science communication" and that it should continue to be a model for other museums.

"What I leave behind is an extraordinarily talented group of scientists it was an honor to hire and amazing programming we created in very short order," Lowman said. "Those amazing scientists have the talent and the creativity to continue those programs."

But Lowman's departure will mean a tremendous blow to the museum, Bilbro said.

"As the founding director, I would say she created an outstanding legacy for the state," Bilbro said. "It will be a long time before we can recover from the impact of her loss."

Lowman's role at the museum wasn't without some controversy.

On July 1, Lowman was effectively demoted from her original position as director of the center, where she oversaw nine scientists and other staffers who conducted research in labs designed to showcase science to the public. Her altered role, created by Koster, contained no management duties.

The reshuffling angered many in the national science community, including University of Illinois anthropology Professor Kate Clancy. In her blog for Scientific American, Clancy wrote that it "seems to be a massive waste of talent."

Bilbro said she also opposed the move, although she understood Koster's motivation to unify the museum.

"I saw the Nature Research Center as a part of the museum," Bilbro said. "I just disagreed with the way he restructured and reorganized."

Lowman said she didn't know about the California job until the academy began recruiting her for the position. But she pointed out that her transition to new job responsibilities at the North Carolina museum made the timing of her departure ideal.

"It actually was a perfect time to make a change because one chapter was starting and one was finished," Lowman said.

Over the summer, Lowman became one of hundreds of state workers declared "at-will" by Gov. Pat McCrory. Her new "exempt" designation removed protections against arbitrary firing and stipulated that loyalty to the governor is "reasonably necessary" for the job.

The new exemptions caused concerns in the museum's leadership over possible impacts to the museum's accreditation. Responding to these concerns, one accrediting agency told Koster that exempt designations would create problems only in certain situations – one of which was high turnover.

"If we saw during an accreditation review that a result of this set up was causing high turnover and extended vacancies in essential positions (or other symptoms), which in turn were putting collections or visitors at risk or negatively impacting the museum's ability to fulfill its mission, the Visiting Committee or Accreditation Commission might raise it as an issue of concern," Julie Hart, American Alliance of Museums senior director of museum standards and excellence, wrote to Koster in an email Aug. 14.

Lowman contested that designation through the state's Office of Administrative Hearings, arguing that she did not meet the legal definition of a so-called "policy-making exempt" employee and was "unaware of any part of job description that requires loyalty to the governor." As of last month, only three other employees out of almost 1,000 chose to contest their new at-will status.

Despite these changes, Bennett said she has no concerns about the museum's ability to recruit high-quality scientists interested in filling Lowman's shoes.

"In my mind, the museum is world class now, and there will be a lot of people wanting to be part of the museum," Bennett said. "I'm not worried about that."

No museum screening for film on sea-level rise

Lowman's departure also comes amid controversy over the museum's decision not to screen a documentary about sea-level rise, originally reported by the Independent Weekly.

The nonprofit Coastal Federation approached the museum to present "Shored Up" during one of the NRC's weekly Science Cafe events in January.

According to a written statement, Koster said showing the film wouldn't be the best way to present "an issue as significant and complex as sea level science."

"For contemporary issues that connect science with societal innovations and environmental stewardship, the most constructive role for this Museum is to be an engaging venue with multiple resources and views," Koster wrote in the statement.

Representatives with the Coastal Federation did not return a phone call seeking comment Monday.

Johnson said Monday that a committee made up of museum staffers typically reviews proposals for outside programming, such as speakers and other events.

Film proposals are rare, Johnson said, but for the first time under Koster's tenure, the committee decided to get final approval from management for the film before scheduling it. He said the committee did not recommend showing the film by itself, but discussed pairing it with a panel or other alternatives.

The science of the film, Johnson said, was not the committee's primary concern.

"The concern was about whether this was the best and most complete way to discuss the topic," Johnson said.