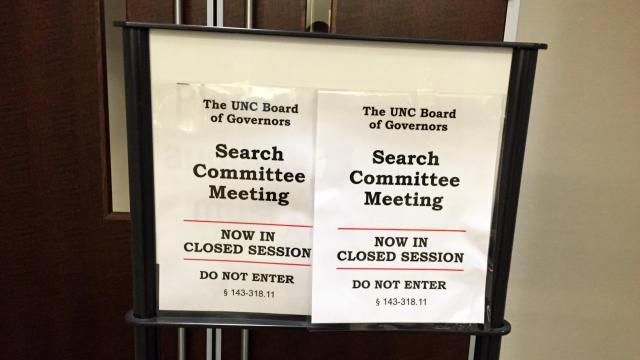 Raleigh, N.C. — The state's top lawmakers are demanding that the University of North Carolina Board of Governors turn over draft minutes and "all records in the University’s possession" regarding a closed-door meeting on Oct. 30 during which the salaries of a dozen chancellors were increased.

The Board of Governors is scheduled to talk about the legislative request on Friday. They have also summoned members of the board to speak to the legislature's powerful Joint Legislative Commission on Governmental Operations next Wednesday.

Joni Worthington, the UNC System's vice president for communications, confirmed the board would discuss the legislature's request on Friday. "Board action is required to produce the requested information," she wrote in an email.

Louis Bissette, an Asheville lawyer and vice chairman of the board, said the request from lawmakers was unusual in his experience, but one he expected the board to agree to.

"I would anticipate that the board would approve the release of this information," he said.

This request comes after a tumultuous fall for the Board of Governors.

Members, particularly then-chairman John Fennebresque, were pilloried by a controversial and largely closed-door search process for a new UNC president. Barely a week after the board voted to appoint former U.S. education secretary Margaret Spellings appointed as the UNC system's new president, the Board of Governors met in Chapel Hill on Oct. 30.

Much of that Oct. 30 meeting was a close session. At the conclusion of that meeting, board members made reference to raising the salaries of more than one chancellor.

However, immediately following the meeting, the board refused to disclose those raises, saying they weren't final until those involved were notified. That failure to disclose information properly, as well as taking such action in closed session without ratifying it in public, runs counter to state open records and open meetings laws, according to multiple lawyers with expertise in open government rules.

Three days later, the board disclosed it had handed out raises to 12 chancellors, including North Carolina State University's Randy Woodson and UNC-Chapel Hill's Carol Folt.

Even before those raises were announced, legislative leaders seemed to be frustrated with their inability to get information about whatever action had been taken.

"There may be some confusion regarding the ability of the North Carolina General Assembly to access records of closed sessions of public bodies," Tripp wrote. "In light of this, it may be helpful for your office to email a reminder to board members of the University’s continuing duty to respond to legislative requests for information, even where a particular meeting occurs in 'closed session' for purposes of the Open Meetings Law."

Multiple media outlets, including WRAL News, have requested the minutes of the October closed session as well. North Carolina's public records law requires that those minutes be disclosed once the reason for the closed meeting is no longer confidential. As of Thursday, the Board of Governors has not provided copies of those minutes.

Bissette said that the board would not formally approve its minutes from October until its December meeting.