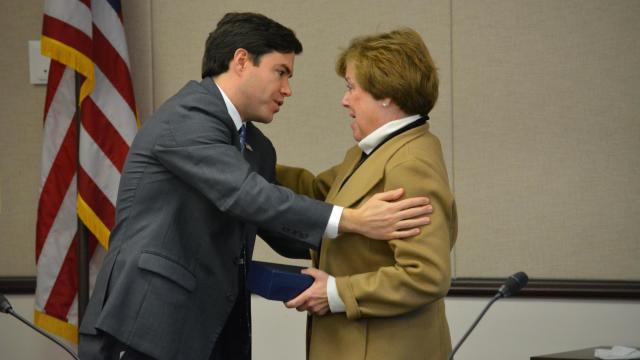 Raleigh, N.C. — Several top state education leaders announced this week that they are retiring or leaving their jobs at the North Carolina Department of Public Instruction. The announcements came as State Superintendent Mark Johnson said he has sought ideas about "organizational and staff changes to make the department run more efficiently."

Any changes Johnson wants to make will have to be approved by the State Board of Education, which is embroiled in a lawsuit over whether the board or superintendent should have the power to make those kinds of decisions. As of now, the authority still rests with the board.

Deputy State Superintendent Rebecca Garland is the highest-ranking education official to announce that she is retiring. She has served in that role since 2014 and has spent more than 30 years in education. She previously worked as the department's chief academic officer and as executive director for the State Board of Education. Before that, she worked in Orange, Alamance and Harnett county schools.

At Thursday's State Board of Education meeting, Garland cried as she told board members how thankful she is to have held the job.

"I'm a very strong proponent of public education. I do think that it changes children’s lives and makes our state strong," she said. "Saying that public education is the best choice is only a mantra if we don’t work at it."

Garland said she has served under four state board chairs and four state superintendents. She's worked with 45 board members and has attended 180 state board meetings in 15 years.

"Those of you in the department who keep asking me how I know so much, there is no secret sauce. It comes from sitting in board meetings," she said.

State Board of Education Chairman Bill Cobey thanked Garland for her service and for her "even-tempered approach to crises."​

"We don’t have enough time or the right words to let you know the depth of our admiration," he said. "You are one of those people who has given your life to public education."

Garland is not the only state education official who is leaving. Others include:

Phillips has accepted a job as assistant director of human resources for the state of North Carolina. Beaulieu is joining the Public School Forum of North Carolina as senior policy advisor.

"Rachel is an accomplished attorney with extensive experience in N.C. education law issues, as well as a very effective, seasoned and respected legislative liaison with trusted relationships on both sides of the aisle in the N.C. General Assembly," said Keith Poston, executive director of the Public School Forum.

"(She) will definitely be a key player as we expand our reach across the state to provide in-depth analysis and real-time updates on key education policy issues that our state partners need to be more effective ambassadors for public education," Poston added.

It's unclear how many others at the state education department are planning to leave or retire. It's also unclear how the state will fill the open positions.

"That’s a joint thing between the board and superintendent," Cobey, the state board chairman, said. "Usually the superintendent comes up with somebody that he presents to us, but we have to be comfortable with that person."