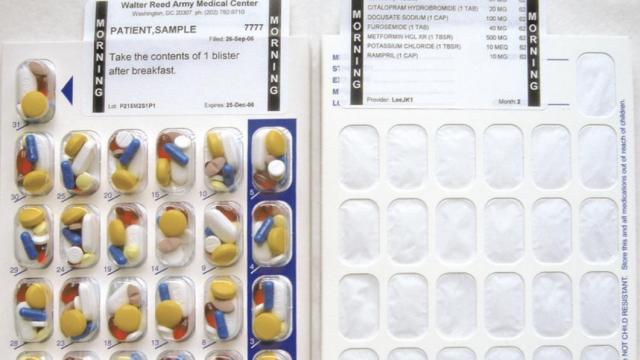 In the last ten years, the number of prescriptions the average American individual uses has reached "epidemic proportions." According to a literature review, almost ninety percent of adults aged 62-85 use at least one prescription; more than four in ten take five or more. Almost twenty percent take ten or more. In skilled nursing facilities, the average number of medications per resident is 14.

Unfortunately, at the same time that the number of medications seniors must self administer has increased, their ability to organize and take the medications as directed may be declining. It is no mystery why the number of Emergency Room visits and hospital admissions due to medication mismanagement has increased. According to The Lown Institute in a 2019 report, 750 older (over 65) Americans are hospitalized every day due to serious side effects from one or more medications. Furthermore, in just the last ten years, older people sought medical treatment or visited the emergency room more than 35 million times for adverse drug events.

Besides asking one’s physician to help reduce the number of prescriptions, what tools exist to help seniors correctly adhere to the prescribed times, types of pills and any special instructions (like "take with food") each day?

While a number of companies market electronic devices with the ability to dispense medications correctly and send reminders when they aren’t taken, one simple tool which independent pharmacies are increasingly beginning to employ are blister packs.

Blister packs, pills prepackaged in punch cards or plastic sleeves, provide all the medications by time of day, for each week. These can truly be a lifesaver, both for those adults unable to fill their own medication organizers, or adult children who do this for them. In one study, researchers found that correct medication management resulted in 71% compliance versus 63% in the control group.

A nice side-effect of this service is that the pharmacy must synchronize the prescriptions so that all the medications are ready at the same time before being packaged. Some pharmacies will also deliver a month’s worth of medications right to the doorway for those seniors who no longer drive or who simply need to simplify their lives.

What is the cost? It depends on the pharmacy and also the number of medications. Some pharmacies will provide the service for free if there are more than three prescriptions; others charge a nominal fee, like $10/month.

A common question patients ask is can the pharmacy also package over-the-counter medications, such as aspirin or vitamins, in the blister packs? The answer is yes.

How complicated is it to move Mom or Dad’s meds to a pharmacy that can provide this service? Not very. It usually requires filling out a consent form with the new pharmacy. The new pharmacy then reaches out to the old pharmacy to get the prescriptions transferred.

How long does it take for the blister packs to be prepared? It varies, depending on the pharmacy, it takes from three days to two weeks. A good pharmacy will make sure you have enough medications in-hand to last until the first blister packs are ready.

Here is a list of pharmacies in the area who offer this service:

Josef's Pharmacy: in Raleigh and Durham