Cary, N.C. — On any given crisp autumn afternoon you're likely to find the Cary greenways filled with walkers and joggers keeping count of their steps. A trip around the Macedonia Lake loop may earn you a couple of thousand steps, but that's nothing compared to what Ty Folli and Don Romesburg earn every day. The pair are part of Cary's curbside leaf collection team, and may walk as many as 9 or 10 miles a day, raking and picking up leaves behind a collection truck.

“It is good exercise,” Tom Lehman from the Town of Cary explains. He did the job 20 years ago, now he oversees the effort. “Basically it's the same job, there's just more of it, more territory to cover.”

The town has more than 500 miles of residential streets. They use nine three-person crews to collect leaves left at the curb. One person drives, the other two walk along operating a huge vacuum/shredder that fills the truck.

“It's basically two guys walking behind the truck picking up leaves,” Lehman said. 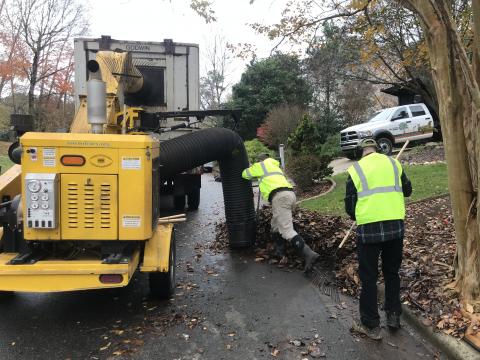 Cary also has one truck that allows the driver to operate the entire process.

The leaves are taken to a holding area. Each truck may dump their cargo several times a day depending on the neighborhoods they're clearing that day. From there, the town pays a company to haul the leaves away. The bounty eventually becomes compost.

In 2017, 10 teams picked up about 7,000 tons of leaves. A street sweeper following the collection trucks collected another 2,500 tons according to Stanley.

The town is divided in to zones, each zone will have two rounds of leaf collection before Christmas, and one after. Cary began round 2 early Monday morning.

The teams are currently on schedule, however Stanley says weather has been an issue this year. “The rain by far is the biggest challenge. It puts a lot of stress on the machines.” Wet leaves and excessive water can clog the giant vacuums “and the machines start breaking down,” Stanley says.

But as long as the machines keep working, Ty Folli and Don Romesburg will keep walking, collecting more steps and more leaves along the way.