Tom Margittai, Who Revitalized the Four Seasons, Dies at 90 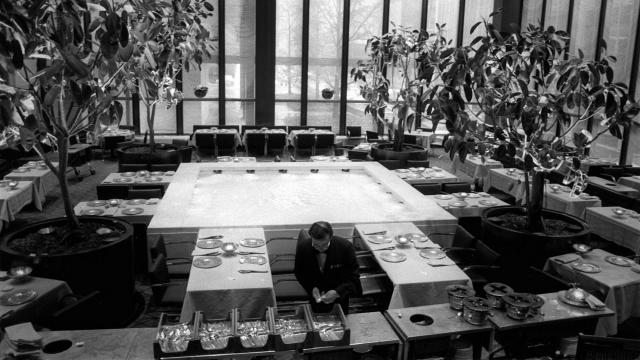 Tom Margittai, who with a partner rejuvenated the Four Seasons restaurant from autumnal senescence into a majestic — and, for the first time, profitable — three-star magnet for New York City’s power brokers, died on Friday in Santa Fe, New Mexico. He was 90.

The cause was complications of heart surgery, Richard Tang, his spouse and only immediate survivor, said.

Margittai (pronounced mar-gih-TIE) arrived in New York in 1950, having been narrowly delivered from the grip of the Nazis during World War II. He and his parents had been among 1,600 Jews rescued by Rudolf Kastner, a Hungarian lawyer and journalist, who had bribed the Germans to smuggle them by train from Hungary to Switzerland instead of transporting them to the Auschwitz concentration camp in German-occupied Poland.

Margittai began his catering career as a dishwasher at the Waldorf Astoria. He joined the culinary conglomerate Restaurant Associates in 1962 and worked his way up to vice president for the company’s upscale outlets.

Joseph Baum of Restaurant Associates had created the Four Seasons on the ground floor of the Seagram Building, on Park Avenue and East 52nd Street, in 1959, but by 1973 it was considered to be past its prime. Restaurant Associates, by then overextended, was glad to unload the lease when Margittai and Paul Kovi offered to buy it.

In a campaign conceived by advertising impresario George Lois, the partners promoted the restaurant with a personal stamp. They published an “Annual Love Letter to New Yorkers” and signed it, convivially, “From the-two-of-us."

By 1977, Margittai and Kovi had so revolutionized the restaurant that book publisher Michael Korda proclaimed in The New York Times that its formerly forsaken bar, later called the Grill Room, had become “the most powerful place to eat lunch in town,” a dominion that Lee Eisenberg of Esquire magazine later immortalized by calling the Four Seasons the home of the “power lunch.”

“If it wasn’t for Tom Margittai,” Niccolini said in a phone interview, “the American cuisine the way we know it today would not exist.”

The partners modernized the menu, introducing healthful “spa cuisine” and other culinary innovations, like a baked potato served with its own bottle of Lungarotti olive oil. The Times restaurant critic Mimi Sheraton awarded the Four Seasons two stars in 1979; a later Times critic, Bryan Miller, added a third in 1985.

Margittai and Kovi viewed their mission as twofold. They were not merely pleasing palates; they were also feeding egos.

“Nobody pays $9.75 to have the world’s best baked potato,” Ruth Reichl wrote in The Times in 1995, referring to that off-menu favorite, which would cost about $16 in today’s dollars. “People pay for the privilege of eating it in the world’s most powerful company.”

In the mid-1970s, when others saw a crime-ridden and fiscally unsound city on the brink, Margittai and Kovi saw an opportunity — to lure those they called New York’s “doers” to their establishment.

“We’re not a jet-set restaurant — and we never will be,” Margittai told The Times in 1984. “We don’t get semiretired chairmen of the board. They go to ’21.’ We don’t get fashion people or the fast-lane crowd. Fashion designers come, but not the people who wear their clothes. We get hard workers, achievers — the editors, the publishers, the architects.”

The partners also cared about what they had created.

Defying the building’s owners, they successfully lobbied to have the restaurant’s original interior, designed by Philip Johnson, declared a city landmark in 1989.

Thomas George Margittai was born on April 8, 1928, in Sighet, Transylvania — its jurisdiction shifted over the years between Romania and Hungary — to Bela Margittai and Piroszca (Scheiner) Margittai. His father owned a lumber mill.

The family lived in Bucharest, Romania, until Tom was about 10, then moved to Budapest. In 1944, when the Germans invaded, the family seemed destined for extermination, but they escaped in late June on what became known as the Kastner Train, an exodus on 35 cattle cars that Adolf Eichmann of the SS had agreed to in exchange for gold, gems and cash.

The train was diverted by the German authorities to the Bergen-Belsen concentration camp, where the refugees were held for several months before most of them were transported to Switzerland by December. The family emigrated to what would become Israel before Tom Margittai moved to New York.

There he would become banquet manager at the Sherry-Netherland Hotel. In 1956, Kovi, who was born in Hungary, was named his assistant.

After a hiatus at the Mark Hopkins Hotel in San Francisco, Margittai returned to New York in 1962 and became a vice president of Restaurant Associates; by then Kovi had been running several high-end establishments for the conglomerate. They became directors of the Four Seasons in 1968.

In 1972, Margittai was mulling an offer to run the Playboy Clubs, but the chef and cookbook author James Beard, a friend, suggested buying the Four Seasons instead. Restaurant Associates, which had overexpanded, demanded $230,000 and insisted that Margittai and Kovi also acquire the nearly defunct Forum of the Twelve Caesars, on West 48th Street.

The partners put $15,000 down, closed the Forum and resuscitated a restaurant that, John Mariani wrote in “The Four Seasons: A History of America’s Premier Restaurant” (1994), was “losing its soul, its personality and its allure.”

After the partners retired, Kovi divided his time between New York and Budapest; he died at 74 in 1998. Margittai, who won a James Beard Foundation Award in 1985, retired to Santa Fe with Tang, a jewelry designer and artist.

In 2017, new partners opened the Pool and the Grill at the original site of the Four Seasons. As the culinary axis was about to shift, Paul Freedman assessed the fate of the original space in his 2016 book, “Ten Restaurants That Changed America.”

“The scene of so many deals is now doomed by a transaction it can’t control and the insatiable appetite of the real-estate industry,” he wrote. “A restaurant that survived and even flourished in the dark years of New York City’s decline may be extinguished by prosperity.”