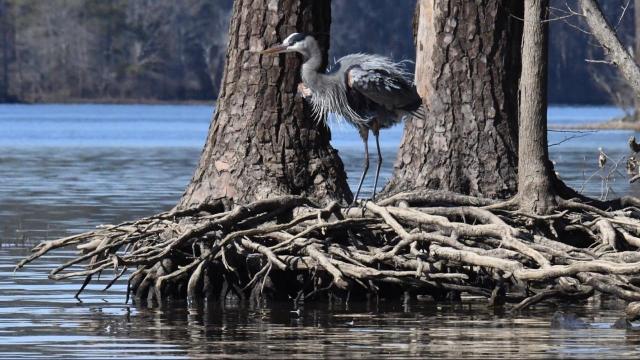 One summer during my early teens, my father and I went to a trout stream near Bat Cave (Henderson County), which we had fished on several occasions. The weather was excellent, but to our surprise the water was dirty and unfishable. Less than a mile upstream we found the problem. Someone was building a cottage near the stream and had cut down the trees all the way to the waters’ edge. A light rain had caused the normally clear stream to turn brown with silt, ruining the fishing and stream experience for everyone for several miles downriver.

My father—with no background in forestry, biology, or fisheries—was more disappointed than angry. He summed up the situation perfectly: “If this person had cared about his neighbors, he would’ve left some trees at the waters edge. Trees protect the water and are our best neighbors.”

It would be years before I heard the terms “riparian buffer” or “forest buffer,” but that’s precisely what my father was talking about. Since that experience many decades ago, I have seen the same scenario repeated multiple times. Removing the buffer, a simple barrier of trees, shrubs, and perennial plants, can cause a stream or river to be silted for miles below the breach. If the wound in the shoreline remains over a period of time, life in and along the stream—fish, mollusks, amphibians, mammals, insects, and birds—will be impacted.

Here, it is not necessary to discuss “legal setbacks” of 25, 50, or 100 feet required by some cities, counties and watershed authorities. I’m simply talking about being courteous, exercising responsibility and showing good judgement. Buffers — whether in the mountains, Piedmont, or in eastern lowlands along coastal rivers — offer many benefits.

First, tree roots hold the banks of a stream or lake in place. Those same trees, shrubs, and perennials will also filter out sediment and debris before it gets to the water. Perhaps more important, in this age of herbicides and pesticides, a riparian buffer can filter out many harmful chemicals before they can affect wildlife and our own health.

By now, I hope you realize that whether you live in the mountains, the Piedmont, or the coastal plain in North Carolina, you are both upstream to someone and downstream to someone else. This is true whether or not you actually live on a stream or river. The conduct of upstream landowners can affect your water quality, your health, and to a large degree, your quality of life.

By the same token, your actions can also have a positive or negative affect on your downstream neighbors. We must all be “part of the buffer.” It is the neighborly and responsible thing to do.

I’ve thought about this ancient conflict between upstream and downstream landowners as we have wrestled as a state and nation with our current conundrum: who should wear a face mask and where? For several months now doctors, public health officials, and leaders at every level have asked each of us to wear a face mask when we are away from home and in close proximity to other people. I like to think that we have been asked to place a simple buffer between us and our neighbors. In addition to wearing a face covering, we have also been asked to stay a respectful six feet from others in public places, widening the buffer.

Where simple actions and modest effort can offer significant protection, it seems almost incomprehensible that some North Carolinians have refused to wear a face covering. As with our attitudes toward riparian buffers to protect a river, wearing a face mask has nothing to do with politics, but it has everything to do with one’s role as a caring, responsible neighbor. The absence of a mask in public settings is not a statement of legal rights or constitutional rights, but an act of selfishness. In the coming months each of us must “be part of the buffer.” Selfishness is not a virtue in any county, state, religion, or political party with which I am familiar.

None of us can be completely certain about what policies will be adopted with regard to schools, restaurants, sports, and businesses until an effective vaccine is available. I do know, however, that those of us over 70, and all other Tar Heels who value their health, will applaud fellow North Carolinians who work together to protect each other in this difficult time.

I have marveled over years at the simplicity and effectiveness of nature’s buffers. On remote Hazel Creek in the Smokies and on small streams flowing through cove forests near Mount Mitchell, I have seen heavy rains absorbed by woody buffers, while the streams remained perfectly clear. I regularly see the effectiveness of the buffers comprised of sycamore, musclewood, and American holly along the banks of Crabtree Creek in Umstead State Park.

I am amazed at the stands of tupelo along the Roanoke River and the strength of thousand-year-old cypress that form the buffer on the Black River. Finally, there is no more beautiful buffer than the one on our coast comprised of salt marsh, shrub, and live oak protecting hundreds of miles of shoreline. Nature’s buffers and her lessons are simple and effective.

Too often in decades past our relationship with nature was one of both love and abuse. We talked about our appreciation of clear mountain streams and Piedmont lakes, yet we cut down the trees to get a better view. Not long ago we loved our beaches so much that we built houses and condos close to the dunes to be closer to the ocean. Fortunately, most North Carolinians have now learned the importance and power of wetlands and riparian buffers, and have embraced them.

When it comes to face masks and social distancing, the stakes are too high in the current pandemic to play the game of “my rights versus your rights.” Nature has shown us that we can be protected by simple buffers. In the coming weeks I hope we will all become better neighbors by wearing a face mask to protect each other, while continuing to support robust riparian buffers that protect the waterways near our homes. Being part of the buffer is the North Carolina thing to do. 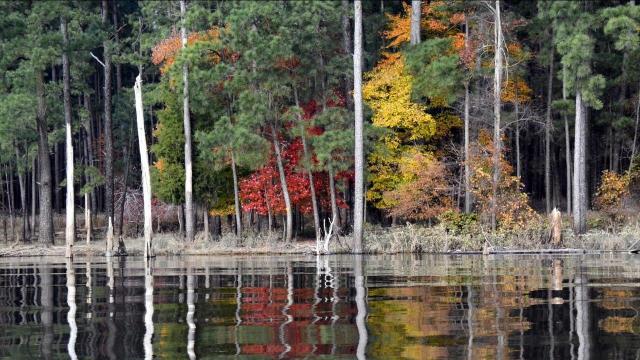 Buffers on our lake shores protect water quality and everything that depends on it. This photograph was taken in November at Jordan Lake in Chatham County (photo 1). Blue herons and other wildlife thrive in the forest buffer on Harris Lake, just south of Raleigh. (Photo 2) 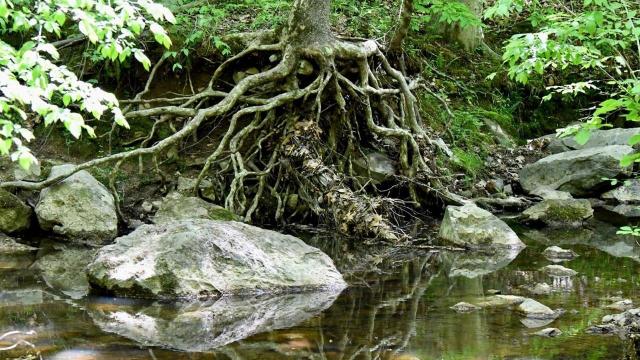 Tree roots, and the roots of shrubs and perennial plants, are the muscle and sinew holding shorelines in place. This photo was taken on the Tar River near Oxford (photo 3). 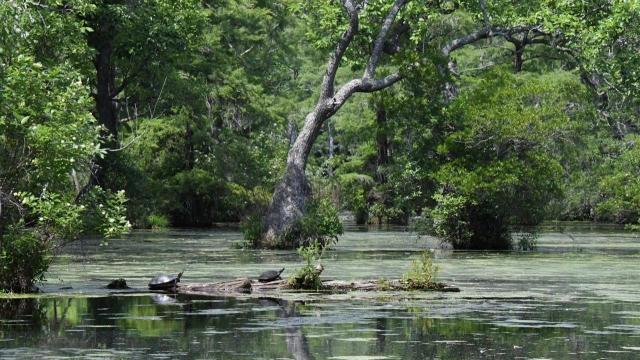 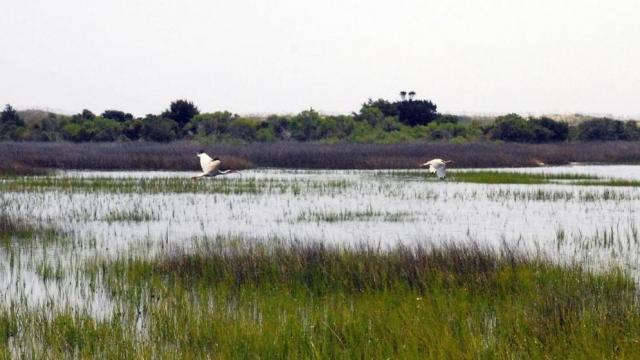 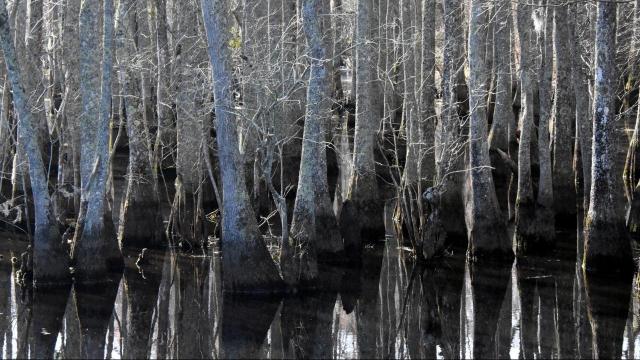 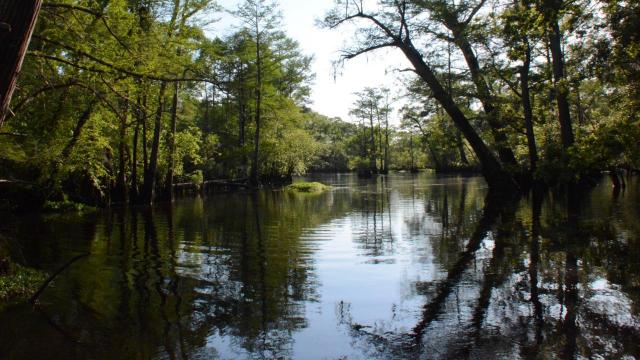 In eastern North Carolina shoreline integrity and water quality are protected by stands of tupelo on the Roanoke River (photo 6) and by ancient bald cypress along the Lumber River and Black River (photo 7). 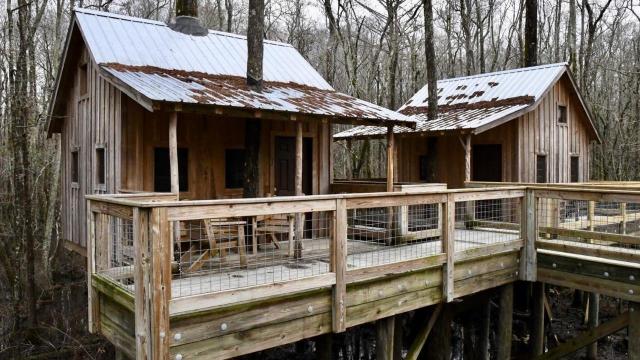 Smart planners have learned to utilize and live within the buffer, including camping platforms on the Roanoke River above Plymouth, and these wonderful rental cabins built “into the buffer” of the Cashie River near Windsor in Bertie County (photo 8). 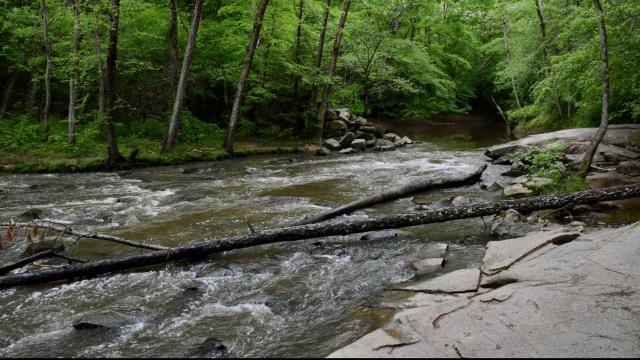 Even within urbanized areas, forest buffers can be a powerful force to ensure water quality. This is heavily forested Crabtree Creek in Umstead State Park, between Raleigh and Durham (photo 9). 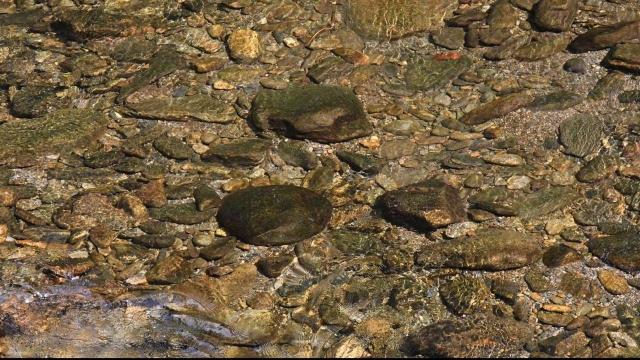 I have taken hundreds of photographs of crystal clear water in North Carolina and in other parts of the world. This photograph (photo 10) of gin-clear water could have been taken on the New River as it flows north toward Virginia, on the upper Tuckasegee River in Jackson County, on Wilson Creek between Lenoir and Linville, or at the Davidson River at Brevard. It was, however, taken at Hazel Creek in the Smokies just before it flows into Fontana Lake. With strong forest buffers in place, this is what water can, and should, look like!