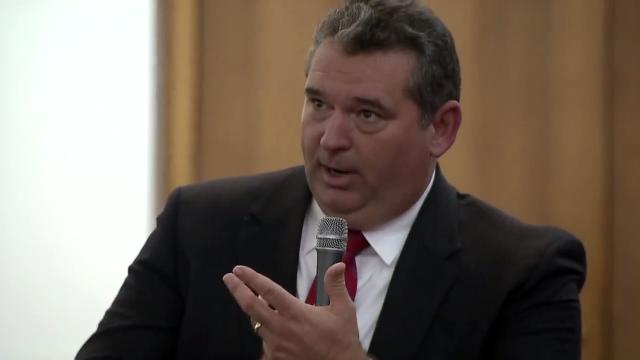 EDITOR'S NOTE: News analysis from Tom Bullock is a reporter for WFAE-FM public radio in Charlotte.

Two years ago David Lewis bragged about his own partisan efforts to elect fellow Republicans. Now the state representative from Harnett County is angry and says Democrats are doing the same thing. But in a fiery speech to make that point, Lewis fell into an age-old trap of contradictions.

Just how fired up was David Lewis during a hastily called press conference Wednesday afternoon?

"These liberal dark money groups, financed and controlled by allies of the Democratic Party are determined to use and abuse the court system to achieve unprecedented chaos."

And Lewis is confident he knows who is leading this political conspiracy.

"This is all a part of President Obama and Eric Holder's efforts to sue Republican states while ignoring egregious blue states like Maryland and Illinois."

Last June, the U.S. Supreme Court agreed that 28 of North Carolina's 170 state legislative districts were racial gerrymanders. Lewis was one of two Republicans tasked with leading the court ordered redistricting.

In January, a federal panel of judges ruled the new maps were not as good as those drawn by an independent expert, known as a special master, who was tasked with redrawing a handful of districts. The court ordered the independent map to be used in this year's election.

Which brings us to Wednesday. The plaintiffs in this long-running case filed an appeal with North Carolina's Supreme Court, hoping it would order the special master's map in Wake and Mecklenburg be used right away.

Lewis, the co-chair of the legislature's Republican-led redistricting effort, saw this as a judicial trick.

He claimed the plaintiffs were simply judge shopping in order to help their preferred political party. "Literally," Lewis stated, "all they care about is electing Democrats at all times and at all cost."

This moment of seemingly fervent outrage at partisanship is where Lewis fell into a political trap of his own making based on a series of contradictions.

For Lewis rose to national prominence back in 2016 when he was leading another Republican effort at court-ordered redistricting. This time over racial gerrymandering in North Carolina's congressional districts.

Here's how Lewis bluntly described his plan for redistricting back then:

"I acknowledge freely that this would be a political gerrymander which is not against the law. I propose that we draw the maps to give a partisan advantage to 10 Republicans and three Democrats because I do not believe it's possible to draw a map with 11 Republicans and two Democrats".

There were other contradictions as well.

In their motion seeking a stay on the special master's map filed with the U.S. Supreme Court, Lewis's own attorneys argued the fate of the districts in Wake and Mecklenburg should be decided by the North Carolina Supreme Court, which is what the plaintiffs did.

As far as judge shopping, well, the Republicans can be accused of that too when it comes to their current consideration of sweeping changes to judicial districts and partisan judicial elections, which could shift North Carolina's judicial branch to the right.

To be clear, politicians in both parties seem to fall into the trap of contradictions regularly.

Take Democrat Roy Cooper. As governor, he's spoken in favor of independent redistricting for the General Assembly. But back in the '90s he co-led Democratic redistricting efforts which undoubtedly helped his own party.

It's a point Republicans now love to point out.

And perhaps that's also something they should have considered before David Lewis walked up to that podium angry.