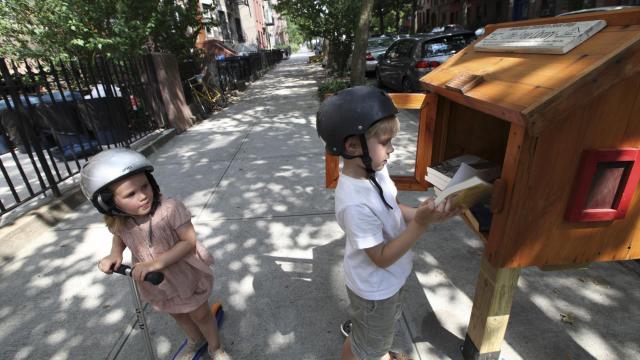 In 2009, Todd Bol was renovating his garage in Wisconsin when he ripped off its old wooden door. He liked the wood, though, and didn’t want to throw it out. So after staring at it for a while, he decided to use it to build a small monument to his mother, who had been a schoolteacher.

He fashioned it into a replica of a schoolhouse, 2-feet-high and 2-feet-wide, put his mother’s books in it, and planted it on his front yard, hoping to start a little book exchange for his neighbors.

“It was a spiritual gesture,” he said.

That gesture spawned what might be called the tiny library movement, leading to his founding of a nonprofit organization called Little Free Library.

By now, more than 75,000 Little Free Library boxes, which blend the form of folk art with the function of a community water cooler, have popped up in all 50 states and in 88 countries.

They operate under the honor system: You take a book and sometimes you leave a book, so the content of the boxes is constantly changing.

Bol, who considered libraries to be part of the connective tissue of communities, where everyone was welcome and reading could be encouraged, died Thursday in hospice care in Oakdale, Minnesota. He was 62. The cause was complications of pancreatic cancer, his brother, Tony, said.

Today, the little book-sharing boxes can be found on urban street corners and at suburban malls, in cornfields, forests and lake sides, in subway stations in New York City, police precinct buildings in Los Angeles and a refugee settlement in Uganda. The Today Show established one at NBC’s headquarters at 30 Rockefeller Plaza in Manhattan.

There is even a Little Free Library on the Yamal Peninsula in Siberia, for reindeer herders and their families.

Each box contains at least 20 volumes, curated by local “stewards,” the people who put up the boxes in the first place and use their own taste and discretion to cull the collections.

Bol was inspired by Andrew Carnegie, the steel and railroad magnet who at one point was the world’s richest man and who left a legacy of libraries around the world. The once-poor Carnegie believed that “the man who dies rich dies in disgrace,” and saw building libraries as a way for him to give back to society and help people help themselves. By the early 1900s, he had established 2,509 of them.

Bol wanted to surpass Carnegie’s feat. He set his sights on building 2,510 little libraries. It took only two years.

“I thought it was just a flash in the pan, like a pet rock,” his brother, Tony, said in a telephone interview. Todd Bol never sent out a news release to publicize his project, and yet small local papers and then the national media began noticing the phenomenon and writing about it.

“What was powerful about it was that all you needed was the idea,” Tony Bol said. “It didn’t have 17 steps. You just build it, or order it, then put it up in your yard, like a public art monument.”

Todd Herbert Bol was born Jan. 2, 1956, in St. Paul, Minnesota, to Richard and June (Pattridge) Bol. His father was a chiropractor, and his schoolteacher mother was a booklover who also tutored children at her kitchen table.

In addition to his brother Tony, he is survived by his wife, Susan Marie (Hanson) Bol; a daughter, Allison; a son, Austin; two brothers, Rick and Scot; and a sister, Carolee.

Bol was raised in Lake Elmo, Minnesota. He graduated from the University of Wisconsin-River Falls in 1979 with a degree in sociology and in 1982 received a second bachelor’s degree, in psychology. He was a public-school teacher for a time before he went into business arranging fellowships for nurses from overseas to come to the United States.

After he built the schoolhouse library box in honor of his mother, things were quiet. But the next year, in 2010, when he was having a garage sale at his home, in Hudson, Wisconsin, his neighbors came by and were immediately captivated by his Little Free Library.

“I put up my library and noticed my neighbors talking to it like it was a little puppy,” Bol told The Washington Post in 2013. “And I realized there was some kind of magic about it.”

As orders started to come in, Bol built many of the little libraries himself, with the assistance of Henry Miller, an Amish craftsman. Little Free Library, the nonprofit organization, made several designs available on its website, littlefreelibrary.org, and offered specifications for do-it-yourselfers.

They spread like a prairie fire. Bol took 25 little boxes made by prisoners to Detroit, and, thanks to a “super steward” there, Detroit soon had more than 400, according to Tony Bol.

The little libraries come in all shapes — as boxcars, birdfeeders and barns; spaceships, robots and roosters; Victorian mansions, log cabins and even the replicas of the houses they stand in front of. Someone in California made one in the shape of an old Volkswagen van with a surfboard on top.

Perhaps surprisingly, vandalism has not been a problem, but there have been exceptions. One Little Free Library in Indianapolis was destroyed by arson this month. But residents have rallied around, and plans are afoot to build 100 Little Free Libraries in its place.

“He was a true believer in the power of one person to make a difference,” she said. “And he certainly did.”