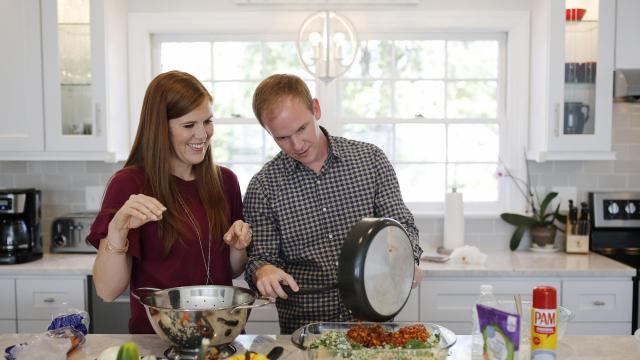 The issue was peanut butter. No matter what form it took — creamy, crunchy, straight from the jar or smeared between two slices of bread — it caused Sunny Gold enormous anxiety.

In fact, the gooey spread posed such a threat that during her first few years of recovery from binge eating disorder, between 2006 and 2007, Gold, 42, a communications specialist in Portland, Oregon, couldn’t keep it around the house. It was one of her favorite foods, and she feared she would binge on it. Just knowing it was there, lurking in her cupboard, made her feel “unsafe,” as she put it.

And that’s when things got really tricky. Because her boyfriend at the time, John Pavlus, didn’t think twice about peanut butter — or any food, for that matter. When Gold, the author of “Food: The Good Girl’s Drug,” told him that it would be a casualty of her getting healthy, he was taken aback.

“It was a bit uncomfortable for me at first,” Pavlus, a 40-year-old writer and filmmaker, admitted. He knew that Gold had grappled with binge eating since she was a teenager, but food was something they’d bonded over. So when she decided that she needed to “cut herself off,” he felt that he was losing something, “less for the practical inconvenience than the unexpected feeling of being subtly disconnected from her,” he said.

“It was strange to think of these parts of our shared reality as being so radically — to me — redefined. Is peanut butter literally dangerous now? Does that mean I have to treat it that way too? Will it be like this forever?”

Pavlus’ reaction is echoed by many romantic partners of someone with an eating disorder, many of whom — though certainly not all — are women. Partners often want to help, but simply don’t know how.

Or else they have no idea there’s a problem, or might not recognize its severity. Because the symptoms of anorexia nervosa, bulimia or binge eating disorder can be easy to miss, even if they’re accompanied by drastic weight loss or a decrease in emotional or sexual intimacy.

The latter, after all, can happen during any relationship. As for the former, many people, especially men, don’t recognize pathological behavior when it comes to women and food.

“I had a client who said he had three sisters and they were always dieting and thought they were fat,” said Cynthia Bulik, a professor of eating disorders at the University of North Carolina in Chapel Hill, and director of the Centre for Eating Disorders Innovation at Karolinska Institute in Stockholm. When the client’s wife developed a full-blown eating disorder, he was blindsided. He had thought her behavior was “normal.” In other instances, a partner might truly not see any changes, what Gayle Lewis, a New York psychologist who specializes in eating disorders and works with couples, calls “unconscious collusion.” “I’ve worked with anorexics who are incredibly thin to the point of needing hospitalization,” she said. “I once asked a spouse, ‘Did you notice she was losing weight, or that her moods were changing?’ His conscious response was, ‘I see her every day, I didn’t notice.’ Her family didn’t notice. No one confronted her about it.”

When he did discover the truth, he felt betrayed. Like any addiction, eating disorders involve hidden worlds that are kept secret from others. “The sense is, ‘if you’re lying to me about this, what else are you lying about?'” said Lewis.

There has been scant research focusing on romantic partners of people with eating disorders. But experts are now recognizing how critical a partner’s response can be to recovery, and how partners are a critical part of treatment.

Since the late ‘90s, family-based treatment, previously called the Maudsley approach, has been the therapy of choice for treating children and adolescents with anorexia and bulimia. But adult patients were usually treated individually. “We would never involve the partners in actual treatment,” said Bulik.

In 2006, Bulik and Donald H. Baucom, a professor of psychology at the University of North Carolina, Chapel Hill, decided to do just that, enlisting partners in the treatment process in a study of 20 couples, one of whom had anorexia. Results showed encouraging improvements in weight-gain and a lessening of anxiety and depression along with a low dropout rate, a perennial problem when treating any kind of eating disorder.

“That’s really a significant outcome, because in other treatments up to 50 percent of people leave outpatient treatment,” said Bulik. “We can’t treat people if they don’t come to the office.”

In a recent study of 11 couples working with a therapist — this one focused on binge eating disorders — researchers, including Bulik and Baucom, found that by the end of the trial, after 22 weeks, 82 percent of patients had stopped binge eating, which they maintained for up to three months (the researchers had funding for only three months of follow-up). The researchers also noticed a major reduction in depression, along with a low dropout rate.

“I think it is very important to instead think about couples as dealing with the eating disorder together,” said Deanna Linville, an associate professor of couples and family therapy at the University of Oregon, in Eugene. “They both need to figure out how to best support each other and connect and communicate as a team.”

That’s what Lauren and Brandon Hill learned to do. Lauren Hill, 29, met her husband in 2012, about two months after she had completed inpatient treatment for anorexia. She’d been wrestling with the disorder since she was 13 and had been hospitalized for it five times.

Throughout the years, she’d been with both helpful and hurtful partners, like the college boyfriend who told her that “no one is ever going to love you or deal with you.'”

When she met Brandon Hill, she wasn’t sure how he was going to react to her illness. But she decided to be honest. “I told him that I had just gotten out of treatment and was seeing a dietitian and therapist and trying to get better,” said Lauren Hill, of Wilmington, North Carolina. “He didn’t seem freaked out by it.”

He wasn’t. But he was, he said, “uneducated.” He didn’t realize how huge an impact the eating disorder had on her life, and would soon have on his. For example, Brandon Hill liked to cook. But Lauren Hill didn’t want anyone to cook for her; she needed to be in control of her meals. Her illness “limited our ability to have a variety of foods in the house,” said Brandon Hill, 32, a training specialist for a software company.

It also prevented her from being spontaneous; she was comfortable only in certain restaurants. The few times she did allow Brandon Hill to take her out, they had to order something “safe.” But she didn’t enjoy herself, and her husband knew it.

“I always felt really guilty,” she said. “I wanted to do these things for him, but something was just not letting me.”

Seven months into their marriage, in 2013, she checked herself into the Eating Recovery Center, in Denver, for a three month stay.

Brandon Hill did telephone sessions with her and her therapist, and also flew in to do in-person therapy. He also went to support groups with spouses of other patients, along with some patients. They would hold a question and answer period to help spouses deal with their mates. He found it helpful to ask questions that he couldn’t ask his wife, like what factors they felt contributed to her eating disorders, and why she had entered treatment now.

When Lauren Hill returned home, the couple tried to figure out a way to make her recovery a joint effort. On weekends they planned their weekly menu, weaving in occasional “challenge meals.” After eating, they’d walk their dog or watch a movie. The idea was to “take away some of the power food has over you,” she said. “So, the next time it’s a little less scary. It’s like I took a little bit of my power back, doing it one fear food at a time.” Last November, Lauren Hill gave birth to a baby girl, something she never imagined doing. The weight gain was difficult, she admits. “For so long I had been obsessed with controlling my body, and all of a sudden it felt so out of control,” said Lauren Hill, who is now a mental health counselor in private practice.

She credits Brandon Hill with helping her cope with her negative feelings. “My husband is very reassuring and tells me that I am beautiful and that he loves the way I look,” she said.

As for Gold and Pavlus, they married in 2009 and have two children. Their relationship is strong, but they had to figure out some ground rules concerning food early on. When he questioned something she ate, even if it was a simple, “Are you OK with that?” she bristled.

“It was like, ouch, you caught me!” she said. “Or, are you shaming me, as other people have shamed me in the past? Are you trying to be the food police?”

But the more they talked, the more comfortable she felt telling him what she really needed. “I said, ‘Thank you, I know you love me, but I can take care of myself. I have my therapist. You just need to trust me. Don’t watch me; be there for me. It’s not your job to help me not binge.'”

Her responses helped him to understand where she was coming from, and also put the onus squarely on her shoulders, and not his.

“I was never made to feel like it was my responsibility to police certain foods,” he said. “She asked for my support in sticking to the choices that she decided she needed to make. And, frankly, the ‘it’s not necessarily forever’ felt reassuring. I didn’t want to imagine us never groaning in delight together over pizza or a crazy dessert ever again, even though — of course — I’d be fine with it if that’s what it took.” Gold still works on her relationship with her body and practices daily mindful eating. She has “slip-ups” a few times a year, when she might binge. Sometimes she shares this with her husband, but sometimes not.

Peanut butter is now allowed in the house and not only in Pavlus’ home office, along with sweets that aren’t hidden. It can still be fraught, especially when Pavlus is out of town and Gold is juggling work and solo parenting. During such stressful moments, “Something like marshmallows or chocolate chips just aren’t a great idea to have around,” she said. She doesn’t want to risk eating them, but wants her husband to be able to have them.

Ultimately, Pavlus said he liked being able to help support her in her recovery in this particular way. “Just recently she asked me to hide some marshmallows where she’d never find them, while I was away on a business trip,” said Pavlus. “I did it without a second thought, and with love.”