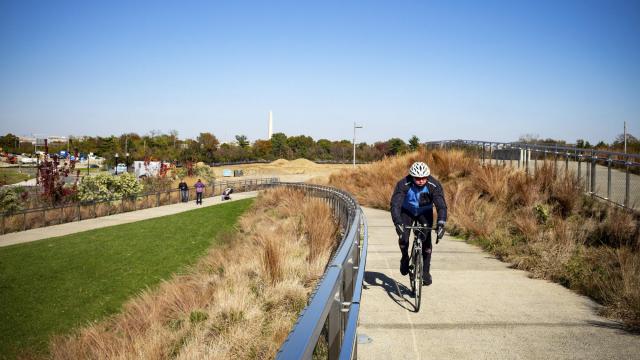 ARLINGTON, Va. — Over the past few months, murals had started appearing on a fence surrounding an empty brick warehouse in the Crystal City neighborhood of Arlington. Sporting geometric shapes and adorned with hanging bicycles, the murals also displayed aspirational slogans in big black letters like “What If?” and “Why Not?”

On Tuesday, Virginia government officials opened the gates to the lot where the murals had popped up. Inside, they held a news conference to welcome the object of their messaging: Amazon.

“Innovation is the lifeblood of our commonwealth and the driving force of Amazon,” Virginia Gov. Ralph Northam said to hundreds of cheering state politicians, business leaders, Amazon officials and real estate developers as he welcomed the e-commerce giant to the area. Northam delivered his address from a stage that had been secretly set up, with a lectern that bore a twist on the state’s unofficial motto: “Virginia is for Amazon lovers.”

The hoopla celebrated a winning bid to lure Amazon, which announced Tuesday it had chosen Crystal City and Long Island City in New York’s Queens borough, for two new outposts that will eventually employ at least 25,000 people each.

Northam deemed the victory by Crystal City as “historic” — especially for an area, just a few miles across the Potomac River from Washington, that has been crying out for revitalization. Crystal City was the dream of a local developer, Robert Smith, who in the 1960s began to construct commercial buildings and high-rise condominiums on lots once occupied by industrial buildings and junkyards. In a nod to its audacious goals, the neighborhood was named for the grand crystal chandelier Smith put in the first building.

In the 1970s and 1980s, Crystal City became a hub for government offices like the General Services Administration, corporations like US Airways and defense contractors. But in the past two decades, many of those tenants left, sending Crystal City into a prolonged decline and leaving it without a strong residential or commercial identity.

A more recent boom in the Washington region has helped fuel some redevelopment in Crystal City. Steps away from Amazon’s future headquarters is a new Whole Foods supermarket, which is owned by Amazon; a yoga studio; and Commonwealth Joe Coffee Roasters, a premium coffee shop.

For Amazon, Crystal City was an obvious choice.

With plenty of vacant properties and potential for redevelopment, the area gives the internet retailer a perch to sell more cloud storage services to the Defense Department and other government agencies nearby. It is also minutes from Reagan National Airport, with many direct flights to Amazon’s main headquarters in Seattle. The neighborhood is walkable and just a few subway stops from downtown Washington and Capitol Hill. The area also has one of the country’s best-educated workforces, and the public school systems rank high.

Amazon had announced 14 months ago that it would take bids from North American cities to create a second headquarters with 50,000 jobs, but if Virginians were disappointed with getting only half of what they bargained for on Tuesday, they didn’t show it.

“First thing I want to say is ‘Wow!'” Brian Ball, Virginia’s secretary of commerce and trade, exclaimed into the mic at the news conference. The audience applauded and shouted “Woo!” in affirmation.

Northam said Virginia had to adjust some of its incentives with the announcement of only 25,000 jobs, but he wouldn’t elaborate.

Sen. Mark Warner, D-Va., also spent the day on a media tour, promoting the ripple effects of Crystal City’s partnership with Amazon. In a morning interview with Yahoo, he pumped his fists in the air and said the benefits of Amazon’s new offices would stretch into rural areas of the state.

“This is really a win for the whole region,” Warner said in the interview. “It’s not just immediate jobs but the enormous amount of spinoffs and what I think that will do to spur entrepreneurial activity.”

Crystal City will anchor Amazon’s presence in the area, but the company’s offices will spill over into parts of the Pentagon City neighborhood and nearby Alexandria. Arlington and Alexandria officials branded the area as National Landing, a 2 1/2-mile urban stretch connected by three Metro subway stations along the Potomac.

Helping to drive Crystal City’s winning bid was the real estate owner and developer JBG Smith, which worked with local officials to present a plan to Amazon. The plan included developing 150 acres of vacant buildings and empty land with the three subway stations and a station for the Virginia Railway Express, which connects to major cities in the state.

Jeff Bezos, Amazon’s chief executive, has not toured the site, a company spokesman, Jay Carney, said. But the location is convenient for the world’s richest man: Bezos owns a massive Washington home — a former textile museum in the tony Kalorama neighborhood, just a few miles from Crystal City.

Some Crystal City residents were joyful about Amazon’s impending arrival on Tuesday, while others were wary.

Evelyn Wong, a mother of two toddlers, said she was excited about the prospect of her home’s increasing in value. On a Facebook page for her town house community of 200 units, residents have been posting frequently about Amazon’s arrival and how much they might be willing to sell their homes for to developers, she said.

“I emailed my Realtor this morning to tell her I was so happy we bought last year,” Wong said.

Others were concerned about traffic and rising inequality in wages. Kevin Combes, a resident of Pentagon City, said Amazon could make residential development stall.

“Jobs-housing balance is critical to growing our cities in a sustainable way,” he said. “People should be able to live close to work, affordably. Crystal City was just beginning to convert vacant office space into housing, but that work has been halted.”

The company and local officials will also have to retrain skeptical residents on the new National Landing branding.

Max Schwager, a Pentagon City resident, was among many locals confused by the National Landing name.

“It’ll take decades for this name to actually take off, if it even ever does,” said Schwager, a theater manager who has lived in the region for seven years. “Especially with neighborhoods, people around here like to stick to their guns.”