To Get a Loved One’s Face, a Lifelike Mask in Return 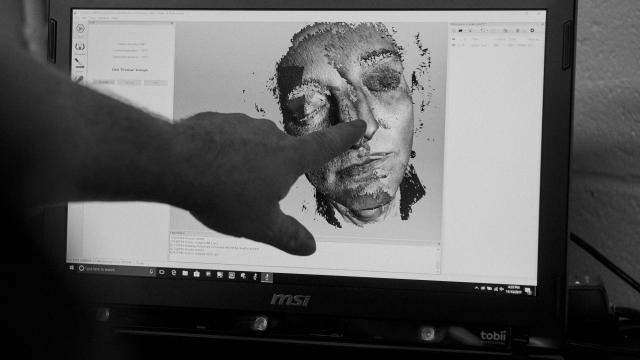 This one is for the dead.

Sometime in the coming weeks or months, a brain-dead person, probably a man, will be wheeled into the plastic surgery department at NYU Langone medical center in Manhattan. A technician will slowly run a scanner over his face, recording the tiniest contour and detail.

Then surgeons will cut off the dying person’s face and attach it to a disfigured man who has been waiting for a face transplant since last summer.

And downtown from the hospital, in a basement below what could easily be confused with a Kinko’s, a team of New York University 3-D printing experts will work their own magic. They aim to generate a replica of the donor’s scanned face so lifelike — or perhaps more accurately, deathlike — that his family members will feel comfortable using it for their loved one’s burial, even in an open coffin.

Up till now, the best that medicine could offer a donor as a replacement face was a silicone mask cast from a mold, with features painted on.

Doctors in the fledgling field of face transplants are making great strides, grafting skin and bone and nerve and muscle to give patients new life and hope. In 2015, Rodriguez performed the most extensive transplant to date, onto a former firefighter.

But there can be no medical marvel without a donor. And asking a family to donate a loved one’s face is not like asking for a heart or a lung. Transplant procurement groups say that for many families, removing the loved one’s face would amount to a second loss.

NYU’s hope is simple: that a better replacement face will encourage more families of potential donors to say yes, reducing the wait time for the tiny but desperate pool of candidates for face transplants.

Helen Irving, the president of LiveOnNY, a network that matches organ donors with recipients, said that the 3-D mask would “make the donation journey more comfortable, and perhaps a bit easier, for the loved ones of donors.”

New York University’s 3-D printing center, LaGuardia Studio, housed in a strip-mall-like building south of Washington Square Park, more typically prints projects for arts and engineering departments. But the process of printing a face is the same, just sped up, because the hospital will need to release the donor’s body to the family as soon as possible.

“We’re essentially condensing what we like to do in two weeks into 36 hours,” said Andrew Buckland, the manager of the studio.

Here’s how it works: The hand-held device that scans the donor’s face has five camera lenses that capture it from multiple angles. It projects a grid onto the face, allowing the scanner to build a three-dimensional map.

After scanning the face, the technicians will spend several hours tweaking the files on computers at the studio — “the equivalent of spot-touching your print,” Buckland said — and send them to a very large printer loaded with cartridges of acrylic-based photopolymer.

The printer lays down layers so thin it takes 1,500 of them to make an inch. A face might require 10,000 layers and take more than 24 hours to print.

The resulting plastic mask is hard, not supple, but if a low-resolution model made from the face of a hospital administrator is any indication, it will be remarkably realistic. Even at lower resolution, the mask captures the tiny variations in color, texture and reflectivity from 1 millimeter to the next that characterize real skin: the countless imperfections that comprise reality.

“With a higher-res version, you would literally see the pores,” Buckland said.

The technicians will rush the mask to the hospital, where the donor’s face, like other organs, will have been removed while he is on life support “because we want to procure the face while it is still being perfused by a beating heart,” Rodriguez said. After the donor’s death, doctors will lay the mask atop the his stripped face and cover the seam where mask meets hairline or skin with a bandage — “as if an incision is being sterilely covered,” Rodriguez said.

Rodriguez got the idea for the 3-D printed face after performing a full face transplant — including scalp, ears, eyelids, nose and lips — in 2015 onto Patrick Hardison, a former Mississippi firefighter whose face had melted off in a mobile-home fire. He had been on a waiting list for more than a year.

The pool of possible donors was limited. The organ-donor box that you can check on your driver’s license does not grant permission to remove your face, so families must be asked directly, and the family of one prospect had withdrawn consent at the last minute, according to a New York Magazine article about the surgery.

Eventually, Hardison received the face of a 26-year-old Brooklyn bicycle mechanic named David Rodebaugh who was comatose after a cycling accident.

When Rodriguez met with Rodebaugh’s family before the operation, they asked what Rodebaugh’s body would look like and he explained about the silicone mask and its limitations, he said. They agreed to let the face removal proceed. “Their primary focus was to see their son help out as many people as possible,” Rodriguez said.

The 3-D printed mask, Rodriguez said, would show appreciation for a family’s sacrifice.

“We try to respect the dignity of an individual who gave up his face or her face,” he said.