Tiny Books Fit in One Hand. Will They Change the Way We Read? 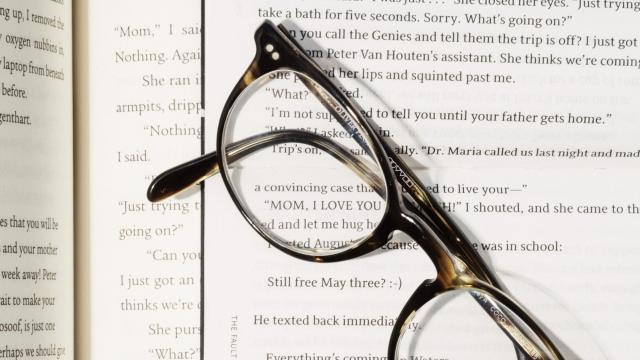 “A book is proof that humans are capable of working magic,” cosmologist Carl Sagan once said. “It’s a flat object made from a tree with flexible parts on which are imprinted lots of funny dark squiggles. But one glance at it and you’re inside the mind of another person, maybe somebody dead for thousands of years."

As a physical object and a feat of technology, the printed book is hard to improve upon. Apart from minor cosmetic tweaks, the form has barely evolved since the codex first arose as an appealing alternative to scrolls around 2,000 years ago.

So when Julie Strauss-Gabel, president and publisher of Dutton Books for Young Readers, discovered “dwarsliggers” — tiny, pocket-size, horizontal flipbacks that have become a wildly popular print format in the Netherlands — it felt like a revelation.

“I saw it and I was like, boom,” she said. “I started a mission to figure out how we could do that here.”

This month, Dutton, which is part of Penguin Random House, began releasing its first batch of mini books, with four reissued novels by best-selling young adult novelist John Green. The tiny editions are the size of a cellphone and no thicker than your thumb, with paper as thin as onion skin. They can be read with one hand — the text flows horizontally, and you can flip the pages upward, like swiping a smartphone.

It’s a bold experiment that, if successful, could reshape the publishing landscape and perhaps even change the way people read. Next year, Penguin Young Readers plans to release more minis, and if readers find the format appealing, other publishers may follow suit.

Green was already familiar with dwarsliggers, which he first saw several years ago, when he was living in Amsterdam (the term comes from the Dutch words “dwars,” or crossways, and “liggen,” to lie, and also means a person or thing that stands out as different). In the last decade or so, the format has spread across Europe, and nearly 10 million copies have been sold, with mini editions of popular contemporary authors like Dan Brown, John le Carré, Ian McEwan and Isabel Allende, as well as classics by Agatha Christie and F. Scott Fitzgerald.

When Strauss-Gabel asked Green if he would be interested in making his novels a test case for the format in the United States, he was immediately intrigued.

“She called me and said, ‘Have you seen any of these’ — my Dutch pronunciation is so bad, so just assume that I’m saying the word — ‘We’re thinking about doing them, and would you be interested?'” Green recalled.

It felt like a rare opportunity to innovate in print, so he jumped at it.

“Like a lot of writers, I’m a complete nerd for book making and the little details that make a physical book really special,” Green said. “It didn’t feel like a gimmick, it feels like an interesting, different way to read.”

Green, the author of the global blockbuster “The Fault in Our Stars,” is in some ways the ideal author to launch this experiment. He’s got a devoted young fan base — his novels have more than 50 million copies in print — and a huge social media following, with more than 5 million followers on Twitter and 3.1 million subscribers on YouTube through his Vlogbrothers channel, which he runs with his brother, Hank.

The mini versions of Green’s novels — “Looking for Alaska,” “An Abundance of Katherines,” “Paper Towns” and “The Fault in Our Stars” — will be sold for $12 each, or $48 for a boxed set, at major retail chains like Barnes & Noble, Walmart and Target as well as independent bookstores, where they will often be given prime placement on counters next to the register. With their appeal as design objects, mini books could eventually make their way into furniture and design stores and outlets like Urban Outfitters and Anthropologie, potentially broadening publishers’ customer base.

Dutton and Green are hoping that younger readers from a generation that grew up with the internet and smartphones might be receptive to the concept of a miniature flipbook.

“Young people are still learning how they like to read,” Green said. “It is much closer to a cellphone experience than standard books, but it’s much closer to a book than a cellphone. The whole problem with reading on a phone is that my phone also does so many other things.” Over the centuries, publishers have experimented with smaller paperback books, occasionally with great success. In 1939, Pocket Books introduced pocket-size mass-market paperbacks in the United States, and sold them in department stores, newsstands and drugstores around the country. During World War II, an effort to arm U.S. soldiers with books gave rise to Armed Services Editions, miniature paperbacks that soldiers carried with them, which helped create a new audience for mass-market paperbacks.

But in the last few decades, most of the pivotal advances in publishing have been digital, with the evolution of e-books and digital audio.

Recently, some publishers have tried shrinking print books as a way to repackage older backlist titles, in an effort to entice readers to buy new editions of books they know and love, and own. Three years ago, Picador released mini books by Denis Johnson, Jeffrey Eugenides, Hermann Hesse and Marilynne Robinson — the tiny editions are 5 13/16 inches tall by 3 11/16 inches wide — to celebrate the imprint’s 20th anniversary. The form was so popular with independent booksellers that Picador decided to publish another collection in 2017 — of nonfiction titles by Hilary Mantel, Susan Sontag, Joan Didion and Barbara Ehrenreich — and is planning to release more next fall.

Strauss-Gabel began her mission to import flipbacks to America this year, when she received Dutch editions of two of Green’s novels. She was startled by their size and ingenious design — the spine operates like a hinge that swings open, making it easier to turn the pages. She contacted the Dutch printer, Royal Jongbloed, and asked if Dutton could become partners with the company to print English editions. Jongbloed, which was founded in 1862 as a bookshop and later became a Bible printer, created the flipback format in 2009, and quickly realized there was a wide audience for compact, portable books. They have since released 570 titles in the Netherlands alone, including works by Jonathan Safran Foer, Fyodor Dostoyevsky, Ian McEwan and Philip Kerr.

But getting English flipback editions of Green’s books proved endlessly complicated. Jongbloed is the only printer in the world that makes them, using ultrathin but durable paper from a mill in a village in Finland. The first sample pages that Jongbloed sent looked cluttered, with letters and words crammed too close together. Dutton’s designers experimented with different fonts and spacing and sent the printer a revised layout. Reformatting “An Abundance of Katherines,” a book that has footnotes and mathematical equations, was especially tricky.

“We’re in a situation where millimeters count,” Strauss-Gabel said. It’s unclear if even a literary and social media supernova like Green can popularize an unfamiliar new format. But Dutton is cautiously optimistic that the minis will take off during the holiday retail season, and is printing an initial run of 500,000 copies.

“I have no idea how people will respond to this,” Green said. “They’re objects that you almost can’t get until you’re touching them.”