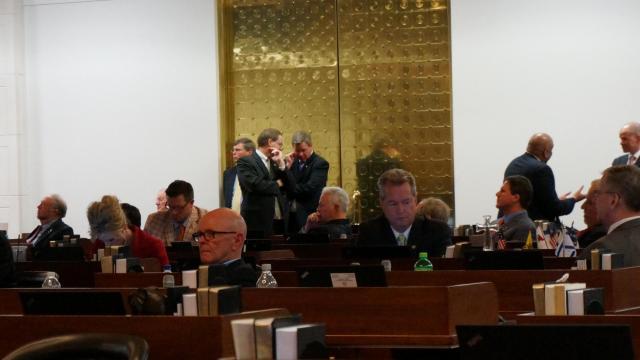 Raleigh, N.C. — Rep. Paul Tine, a lawmaker from Dare County who made headlines when he switched his party registration at the beginning of the 2015 legislative session, said Wednesday that he will not seek another term in office.

"Since returning home two weeks ago, I have come to realize that my absence has taken a heavy toll on my family. It is important that I take the time while my children are still young to be a father and husband," Tine said in a prepared statement.

Tine served one term as a Democrat before changing his party status to "unaffiliated," a move that allowed him to meet with and function as a member of the Republican majority in the House. He says he will serve the remainder of his term.

Despite the prospect of running without a party apparatus behind him, Tine said he was optimistic about his chances for re-election.

"I thought this was going to be the easiest race of the three that I ran," Tine said, pointing out that, as a Democrat, he had to win in a district that typically gave members of his party running statewide only around 30 percent of the vote. "As an unaffiliated, I felt I had a better shot of getting re-elected than I had before."

Tine is at least the seventh lawmaker to say they are either running for re-election or seeking higher office. Although reasons vary, at least in some cases the length of the legislative session that has turned a part-time job into a fully consuming endeavor played a role.

In Tine's case, his district is a big one geographically, requiring hours to crisscross by car during campaign season. As well, the length of recent legislative session kept him away from his young family, as did committee chairmanships that required him to spend more Fridays and Saturdays in Raleigh.

Rep. Leo Daughtry, R-Johnston, announced Tuesday that, after 12 terms in the state House and two in the Senate, he wouldn't need seek re-election. Rep. Paul "Skip" Stam, R-Wake, the chamber's speaker pro tem, announced he would not run again just before the end of the legislative session.

Also not seeking re-election are Reps. Jacqueline Schaffer, R-Mecklenburg, and Rayne Brown, R-Davison. All have said that they will serve out their terms, which won't be complete until the end of 2016. The announcements are coming now because the filing period for next year's elections opens Dec. 1, an earlier than usual date made necessary by an accelerated Spring primary. Voters will go to the polls on March 15 to nominate their party's choices in races ranging from state legislative seats to the presidential contest.

In the Senate, only Sen. Stan Bingham, R-Davidson, has announced he won't run for re-election. Sens. Josh Stein, D-Wake, and Buck Newton, R-Wilson, are both running for attorney general rather than to keep their seats.

Sen. Tom Apodaca, R-Henderson, the chamber's Rules Committee chairman, said he doesn't know if other senators would decide not to run again.

"I know there are some that are considering it," Apodaca said.

Many are waiting until the toil of a session that ran three months longer than anticipated wears off.

"It's not a good time to make a decision when you're exhausted," he said.

Among the ranks of those weighing their options are Apodaca himself, who said he will come to a conclusion on whether to seek office again in mid-November.