Time to Make the Donates! 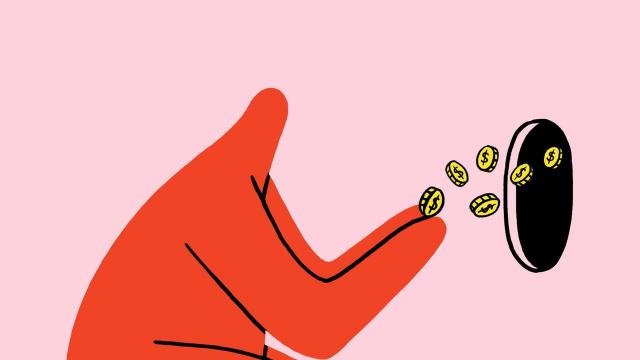 Before the 2016 election, Tess Malone, 28, rarely engaged in charitable giving outside of disaster relief funds or individual GoFundMe fundraising campaigns. But now, donating — often in the form of a late-night, anxiety-fueled frenzy — is as standard an expenditure for her as groceries and dining out.

Malone, who lives in Atlanta and works in communications at Georgia Tech, siphons about $50 from her budget each month toward recurring donations to progressive causes and candidates, including the American Civil Liberties Union, the National Network of Abortion Funds and Planned Parenthood.

Then there are the more sporadic contributions she tends to make to other organizations on an as-needed basis, like when she sent money to Southerners on New Ground after the recent memo detailing efforts to curtail legal definitions of gender.

Malone wryly describes it as “self-medicating with money,” and for her it started the day after Donald Trump was elected to the presidency.

“I was weeping around the office most of that day and trying to make myself feel better,” Malone recalled, “so I set up a recurring donation to Planned Parenthood.” Then, a few months later, President Donald Trump issued the executive order outlining the travel ban.

Feeling powerless and unsure of how to help without meddling, Malone set up another recurring monthly donation, this time to the American Civil Liberties Union. The contribution felt productive, if microscopically so, and helped to assuage an otherwise overwhelming sense of despair.

“Just doing one thing, even if it’s donating, feels like at least I did some of my part,” said Malone, who also canvassed for Stacey Abrams’ campaign for governor in Georgia and regularly volunteers as a patient escort at Planned Parenthood.

For Malone and others reeling from a news cycle that feels like constant crisis mode, flinging money at political and social causes as a knee-jerk response to the headlines has become tantamount to self-care.

Anger or fear as motivation for donating isn’t a new phenomenon: Civil and human rights organizations immediately witnessed a Trump bump after the 2016 election, with people like Malone channeling their shock and frustration by funneling money to political and social causes they felt were in jeopardy under the new administration.

In October, ActBlue, an online fundraising tool for Democratic candidates and progressive causes, closed out its most successful quarter in its 14-year history, reporting a 132 percent rise in contributions (and a 214 percent boost in the total amount of funds raised) compared to the same time frame in 2016. On one particularly impressive day, Sept. 28, the site processed over $11 million in donations. It was the day after Christine Blasey Ford testified before the Senate. Immediately after the announcement of Justice Anthony Kennedy’s retirement from the Supreme Court, the National Network of Abortion Funds saw more than 400 people collectively donate nearly $30,000, according to Lindsay Rodriguez, communications director.

“After news stories that threaten abortion, like the Kennedy retirement, the Kavanaugh hearings and election results recently in Alabama and West Virginia, we see a big surge in people posting on social media that folks should donate to abortion funds and tagging us, and local funds, in those posts,” Rodriguez said.

Perhaps the strongest proof of the power of the panic donation transpired in July, when the Refugee and Immigrant Center for Education and Legal Services (RAICES), a Texas-based nonprofit, scooped up three times its annual operating budget in a matter of days after a Facebook fundraiser, days after news of the government’s border separation policy broke.

For many, it’s a familiar cycle. News breaks — a mass shooting, a rolling back of civil rights, a vulnerable minority group in the cross hairs of legislation. Anger and panic ensue. In the face of that mass collective anxiety, social and political activists steer people toward the organizations already working to directly combat the issue at hand.

Those panicking, eager to help and perhaps more so to feel slightly less terrible about the world if only for an instant, pull out their credit cards or PayPal passwords and attempt to reclaim their sense of agency by handing over a small sum of cash. Repeat as needed.

For those who have the privilege to do so, dispatching 20 bucks to an organization is now as simple as Venmo-ing a friend for brunch, and it’s a small price to pay for alleviating existential despair, if only briefly.

“It’s something I can do late at night from my phone when I’m freaking out,” Malone said. Unlike marching or volunteering, sending money can be done instantly and at any hour of the day or night, no matter when bad news strikes.

“I don’t have enough money to have made any kind of giant difference, but the panic donation is a new reality for our budget,” said Christina Rentz, 39, who lives in Durham, North Carolina, and works as a label manager at Merge Records. “Every time something horrible happens, I text my husband and say, ‘I donated $50 more to the ACLU, because everything is terrible,’ or ‘I donated to RAICES, because I cried on the way to work today.'”

Gun control is an issue that makes Rentz, a mother of two young boys, feel especially hopeless. Consequently, she donates fairly regularly to Everytown for Gun Safety, though she can’t remember which mass shooting spurred her first donation. “I think it was Parkland, but … isn’t it terrible that you’re like, ‘Which school shooting was it?’ Isn’t that horrible?”

Sending money, Rentz said, temporarily alleviates that sense of helplessness and overwhelm. “It sucks to feel like you don’t have any answers, and I think that’s what leads to the panic,” she said. “It’s like, surely someone must know, and maybe it’s these people. ‘Go forth and find the answers because I don’t even know where to start.'” A similar sentiment has inspired Laurel Snyder and her husband, Chris, to donate to organizations like the ACLU and the Southern Poverty Law Center. “We had to support the institutions that could stand up for those beyond the government,” said Laurel Snyder, 44, who writes children’s books and lives in Atlanta.

Snyder, who grew up canvassing and demonstrating, said she prefers to engage with activism by getting out in the streets, but her husband has become a habitual giver. The couple sees their donations not as a coping mechanism but as a responsibility, to the extent that they have become an unofficial line item on the family’s operating budget.

“I feel like, we all didn’t do enough for a really long time, and so we’re sort of trying to pull back that ground,” she said. “In my head, I have to do this budgeting, like, ‘All right, I guess we won’t get pizza this week.'”

Rentz, who has also donated to KIND Inc., You Can Vote and the NAACP in the last year, said, “I think about it like, what could I spend this money on that’s more important than this? And in that moment, there isn’t anything. What, I’m going to go to the movies another night? What is more important than safety and democracy? I don’t know if it’s helping, but just that feeling is worth it to me.”

It isn’t just those on the left who are giving away their cash to alleviate political dread. In the month following the mass school shooting in Parkland, Florida, the NRA received a record-breaking burst of contributions totaling $2.4 million, the majority of it in the form of donations of $200 or less.

One of those donors was Sam Swanson of College Park, Maryland, who had never contributed to the NRA or actively engaged in gun culture until this year. Swanson, 22, who works in cybersecurity, closely followed the events of Parkland on conservative Reddit boards and was struck by the calls for gun control that ensued in the wake of the shooting. After watching the town hall on gun violence hosted by CNN, he said, he was galvanized to act.

He described feeling “disgusted and angered” by the way the NRA staff was treated at the event, and fearful of potential legislation in response to the shooting. “But perhaps most of all,” Swanson said, “I felt a sense of resolve — a resolve to do something to ensure that my rights are protected and that the rights of millions of others like me are protected.” He gave $30 for a basic NRA membership (and bought his first pistol, a 9 millimeter, shortly thereafter).

Swanson has since continued contributing to various Second Amendment organizations. In May, Maryland passed legislation banning bump stocks; Swanson reacted by giving $50 to Maryland Shall Issue, which planned to file a suit against the state. Donating to these organizations, he said, makes him feel helpful and hopeful — and, he added, “a bit more safe, knowing that I’m not alone in fighting for these rights.” It’s telling that the same event spurred an identical response in people on different ends of the political spectrum with irreconcilable perspectives but twinned motivations — fear, anger, helplessness. Though their political positions are opposite, the cognitive mechanisms are strikingly similar.

Ulrich Mayr, a researcher and professor of psychology at the University of Oregon, is the co-author of a study of the neuroeconomics of altruism in 2009, which used brain imaging to track cognitive responses to giving money.

“We basically tracked the reward centers while people see other people being helped, and when that happens, the reward area activity increased,” Mayr said. That reward center in the brain is the same one that is activated by cocaine or, say, getting a bonus at work. “The short story is that we found pretty hard evidence that to a considerable degree, people do give because they really want to help other people.”

Seeing people better off — whether your personal definition of “better off” involves more or fewer guns, or immigrants, or abortion clinics — genuinely does make us feel better, and our brains respond by bookmarking it as something it wants to repeat.

And thus the cycle continues, as the world spins madly on.