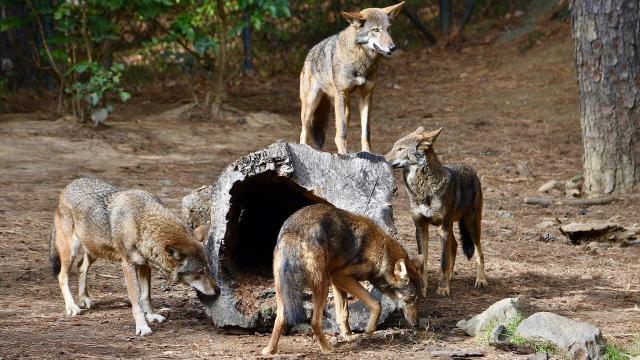 Durham, N.C. — You have just a few more days to check out all 10 of the red wolves at the Museum of Life and Science. Eight of the museum's 10 red wolves will move early next week to a zoo in Virginia.

The museum in Durham announced in December that the eight wolves would be relocated to a larger, half-acre habitat at the Mill Mountain Zoo in Roanoke. The move was slated for early this year.

Matt Pusateri, the museum's senior director of marketing, tells me that it's likely the wolves will leave Monday, Jan. 13, or shortly thereafter.

"We're encouraging visitors to visit by Jan. 12 if they want one last chance to see all 10 wolves at the museum," he tells me.

As I wrote last month, space is the primary reason for the move of the animals, once a top predator in the southeastern United States and now critically endangered. Only about 270 red wolves remain — about 20 in the wild and another 250 in captivity, according to the museum. The move is based on a recommendation from the Red Wolf Species Survival Plan, a cooperative effort that includes the Museum of Life and Science.

More open space at Mill Mountain Zoo, according to the museum, will allow for better management of the wolves' breeding cycles. The two wolves who remain in Durham - brothers Ellerbe and Eno - also will benefit from having more space. They will turn two in April.

Their parents, Moose and Cary, and the six pups born at the museum in late April - Bronto, Rocket, Sprout, Lunar, Mist and Carolina - are making the move.

“Any time we transfer wolves, it's hard,” said Sherry Samuels, the museum's director of animal care, said in a press release last month. "While it’s sad, it's the right move for the individual animals and the species. They're heading to a space that's double the size, which is not only better for them, but better for the wolves that remain behind here.”