Tim Ryan weighs his next move: Take on Pelosi or Trump 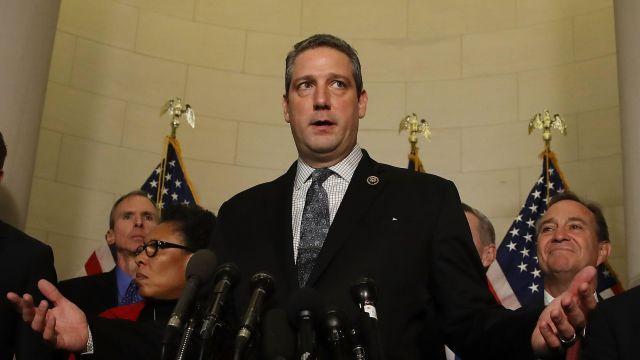 (CNN) — Congressman Tim Ryan is at a crossroads, considering two distinct paths ahead of him.

The Ohio Democrat could, as he did two years ago, challenge Nancy Pelosi to become the Democratic leader -- and potentially Speaker -- in the House. Or he could, as he has been considering, run for president in 2020 to challenge Donald Trump.

People close to the congressman and Democratic operatives in Washington acknowledged that the best option is likely to challenge Pelosi, a lawmaker who dozens of Democrats running for Congress are disavowing on the campaign trail. But Ryan told CNN he is intensely intrigued by a presidential run and feels like he is currently being pulled between running for Democratic Leader and running for President.

His presidential ambitions appeared more on display in a colorful basement classroom earlier this month in the Cresco Public Library, though, where the 45-year old congressman from Niles, Ohio found himself at a seven-person event to kick off a door knocking session for Tim Knutson, a bookish man running to represent the area in the Iowa House.

The energy in the room felt more like a lesson on the Dewey Decimal system than a campaign event, but Ryan assured people he was excited to be there, regaling the Iowans with lessons on running for office, how to win over Democrats who cautiously backed President Donald Trump in 2016 and the importance of building a Democratic bench.

"Go out there and get them," Ryan said, sounding like a coach in a throwback to his football playing days, "because we need you."

While Ryan drove over an hour out of the way to be there, the assembled Iowans had been through enough presidential election cycles to know what the visit was about: Ryan is actively weighing a run for President in 2020 and will make multiple trips to the first in the nation caucus state in 2018 to explore that bid.

"There are only so many places (in my career) to go at this point," Ryan said as his car rolled away from the Cresco event. "I am in a really unique position."

Ryan's political activity in 2018 shows the uncertainty in his next steps.

Ryan will travel to stump and raise money for around a dozen Democratic House candidates in the coming months, a go-to move for someone who may be asking those same candidates to back him for leader weeks after their election. It's a strategy Pelosi herself has used: To date she has raised over $87 million for Democrats this cycle with trips every week.

But Ryan's schedule -- which includes trips to Ohio, Indiana, Michigan and Florida -- is a not-so-subtle hit on Pelosi.

"These are areas where a lot of our leadership -- or our leader -- can't go," Ryan said. "I think it is one of those years that is, candidates can say, 'I am more aligned with Tim Ryan than Nancy Pelosi' that could be really helpful."

Ryan isn't wrong. Republicans have seized on Pelosi's plans to run for Speaker as their best hope to hold the House in 2018, tying the liberal lawmaker to almost any candidate they can. Democrats on the Red to Blue list -- those anointed by the Democratic Congressional Campaign Committee as the party's best chance to win back the House -- have responded by distancing themselves from Pelosi, with 19 of the 63 candidates already publicly stating they will not back her if they win a seat in November.

Ryan had ruled out a run at Pelosi until Rep. Joe Crowley lost to Alexandria Ocasio Cortez in the New York area Democratic primary earlier this year. Ryan said he was shocked by Crowley's loss, but that -- and the fact so many candidates are running against Pelosi -- caused him to consider another run at Pelosi.

"I would say there will be many calculations and that would be one of them," he said of the growing anti-Pelosi sentiment.

At the same time, though, Ryan has begun to put a sharp focus on Iowa, where he has hired Pete D'Alessandro, a colorful organizer and the architect of Bernie Sanders' Iowa campaign in 2016, to introduce him to the state. D'Alessandro's association with Ryan was seen as a sign by Iowa Democrats that the congressman, while still weighing a run at Pelosi, is just as serious about running for President.

He spoke at the Wing Ding Democratic fundraiser earlier in August, urging Democrats to embrace his Irish fighting spirit when it comes to Trump.

"I am ready to get into a bit of a fight. We need to come together and get in a big fight here in America," he told the audience. And he is already planning to come back to Iowa to help J.D. Scholten in his longshot bit to unseat controversial Republican Rep. Steve King.

Ryan declined to say whether he wants one job more than the other, but he leaned into the fact that he may be better with everyday people than he is with his own House colleagues.

"I thought 18 months ago was my moment, so it is hard to tell," he said with a laugh. "But you are not running a national election (for speaker). You are running an election with people who have a personal relationship with the leader and there is a loyalty there. That is to be commended to some extent. Loyalty in this business is sometimes hard to find."

He added: "The speaker thing is obviously a narrower universe. ... But I do well with the public. I do well with voters. I enjoy it. I enjoy learning from them and getting to know them. And I have always been that kind of person. It is part of my personality."

Challenges of a presidential run

Ryan's run at president would undoubtedly be an uphill climb.

Ryan says his biggest hurdles for the presidency are three-fold: Few people know his name, he doesn't have deep pockets and there could be a bus full of other Democrats running.

But Democratic operatives already tracking the 2020 election say he has another vulnerability: He's a white man in his 40s who was pro-life and more sympathetic to gun rights five years ago.

The Democratic electorate has shown throughout the 2018 primaries that they are eager for more women and people to color in Democratic politics, and the party has tilted left since Hillary Clinton lost the election in 2016. This election season has been dubbed the "Year of the Woman," and a host of other possible Democratic presidential hopefuls have run to the left to match the temperature of the party.

Ryan says he doesn't worry that the party is moving away from him.

"I think time will tell who voters pick, but I don't necessarily worry about it," he said. "Obviously there are certain things that a white guy is never going to be able to fully, fully understand."

He added: "I am never going to walk in a black guy's shoes that is 45-years-old like me. Never going to have to do it. Which is why you respect each other, which I think is part of what the next Democratic nominee or leader or candidates across the board need to say."

While Ryan talks about a slew of issues on the stump, he is also full of a wonkier set of ideas to revitalize the country.

Driving through Nevada, Iowa, he spotted the Camelot Theater and suggested a nationwide program to revitalize old playhouses that used to be hubs at the center of town. He includes a story about urban blight in his stump speech, suggesting the government should do more to clear out devastated houses to help underwater homeowners. And suggested one way to revitalize cities and towns outside the eastern seaboard is to move thousands of government jobs into small towns.

But even Ryan's outside-the-box thinking hasn't fully prepared him for the unexpected questions that come from Iowa's excited Democrats.

At his final event of the day on Saturday -- a bar fundraiser for state House candidate Andrew Rasmussen in Ankeny -- Ryan met John Olson, who briefly introduced himself before asking him why the congressman, in 2003, voted against the implementation of a "do-not-call" list.

Ryan, taken aback about being asked about the vote he took in his first year in Congress, laughed.

"We have a lot of call centers in our district," Ryan said shaking his head, preparing for months more of questions from prepared Iowans like Olson.