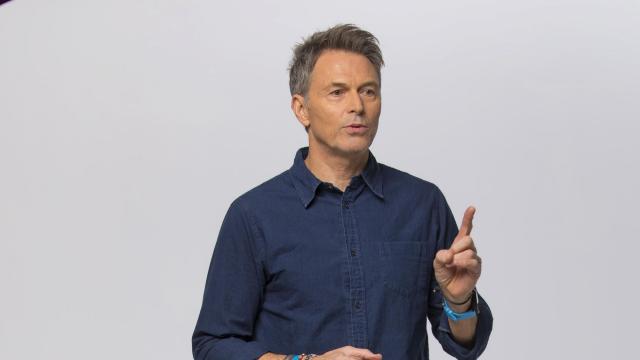 NEW YORK — In 1979, Tim Daly was playing a Russian soldier outfitted with an imposing black wool hat in Shaw’s “Arms and the Man” in Palm Beach, Florida, when his older sister Tyne, who was performing nearby at the Burt Reynolds Dinner Theater, dropped by on closing night.

This back-and-forth went on for a while, with Tyne insisting that it was an actor’s obligation to steal a coveted costume piece, and Tim resisting. Finally, after an expletive-punctuated protestation from Tim, his sister relented. Or so it seemed.

Eight years later, while Tim was celebrating his Broadway debut in Tina Howe’s “Coastal Disturbances” at Sardi’s, a box from Tyne appeared.

“She stole the hat and saved it for the appropriate moment and gave it back to me,” Tim said.

That story doesn’t make it into the Primary Stages production of “Downstairs,” which Theresa Rebeck wrote for the Dalys, who star as tormented siblings in their first theatrical appearance together in New York. (The play had its world premiere in 2017 at the Dorset Theater Festival in Vermont.)

But its essence — the support, the sparring, the resolute love — permeates Rebeck’s comically troubling tale about Teddy, on hiatus from a job where he thinks he’s being poisoned, and Irene, the sister whose basement he moves into while her husband, Gerry (John Procaccino), menaces them from above.

These days, when he’s not onstage in “Downstairs,” Tim, 62, is shooting his fifth season as the sensitively dashing Henry McCord, a presidential ethics adviser and the husband of Secretary of State Elizabeth McCord (played by his real-life partner, Téa Leoni) in CBS’ “Madam Secretary.” In an interview at an Upper West Side Starbucks not far from his apartment, he spoke about familial bonds, the actor’s life and the proverbial stone he’s long been pushing uphill.

Q: So how did Theresa Rebeck come to write you a play?

A: We did “The Scene” at Dorset [in 2013] and had a really happy time, and Theresa said, “What are we going to do next?” And I said, “Why don’t you write a play for my sister Tyne and me?” And she said, “Don’t say that unless you mean it.” And I said, “I mean it,” thinking that there’s no freakin’ way. And about a year later she handed me this stack of pages and said, “Here it is.”

Q: Had you and Tyne sat down with Theresa and poured out your souls?

A: No, but Theresa is very crafty. She’d heard stories from me because I worked with her first and probably opened my big mouth. And I’m sure those things played on her imagination. You know, my sisters are 8, 10 and 13 years older than me, and their mythology is that I was the little prince. And my mythology is that I was like a lab rat, and they would experiment on me and shove me out into the world in all kinds of compromising situations, thinking it was really adorable. And I was just a hapless little boy who didn’t know what the hell was going on. But we clung together because we had a common enemy: our parents. Let’s just say that they were unafraid to include their children in their drama, which was significant.

Q: And sometimes unintentional, as in the death of your father, James.

A: He was to begin rehearsals for a summer-stock tour of “Equus” that I was in with him. He died early in the morning on the first day. I certainly believe there’s a randomness to the universe. But here my father was, about to do a play with his son, and he dies on that very day. What does that mean?

Q: Was following in your parents’ footsteps inevitable?

A: I’ve often said that I sometimes consider it like a congenital disease. But unlike Tyne, I was not all that impressed by actors. To me, actors were drunken grown-ups who were preventing me from having dinner.

But I loved, from the time I was little, watching my dad do theater. It was the most magic, secret, exciting place to be. And I loved the idea that you were engaging these people with this trick, and that if you were good at it they would laugh or weep while you were telling them a story. And of course there were really cute apprentice girls who would put me on their lap, and that had a profound effect on me in some deep way.

Q: You’ve been juggling “Downstairs” with “Madam Secretary.” How does that series manage to stay so politically topical?

A: It seems like there’s a crystal ball in the writers’ office in Los Angeles, because we film these shows months before they air. Clearly they’re using their imaginations to game out scenarios that very often come true. There’s an underlying theme in this year’s episodes, which is the dangers of nationalism and the differences between nationalism and patriotism. A lot of people think that’s just semantics, but it’s not. We’re trying to educate people about why one is fantastic and the other is dangerous.

Q: You’ve also been the president of the Creative Coalition for a decade, advocating for public support of the arts. How’s that going?

A: There are people that think that I coined the acronym STEAM, as opposed to STEM [science, technology, engineering and math], because I frankly thought, Where are the arts? Without the arts, which put things into a human context, all that other stuff is meaningless. So I yelled and yelled and yelled about that every time I went to Washington and now the narrative of the national education policy is STEAM. We just have to see if it gets implemented.

You know, I’ve been pushing the same rock up the same hill for 10 years. I need to term-limit myself out. Drain the swamp. [Laughs] But one of the things I now know about politics is that you’re never done, right? So someone’s got to do it. [Pauses] I’ll do it.