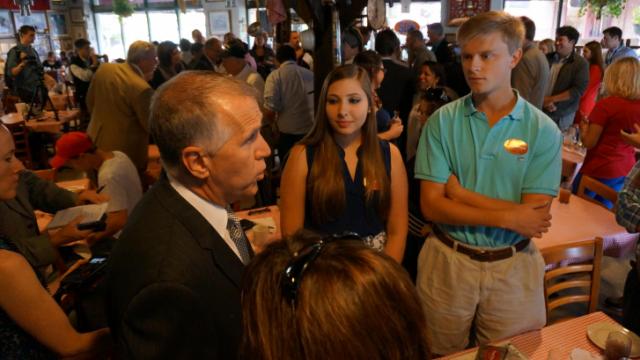 Raleigh, N.C. — North Carolina House Speaker Thom Tillis criticized the Obama administration Wednesday for its handling of security breaches at the White House, saying the incidents reflect a need to be more serious about national security.

Tillis, a Republican, is running against first-term incumbent U.S. Sen. Kay Hagan, a Democrat. He stopped at Big Ed's City Market Restaurant in Raleigh on Wednesday as he campaigned with U.S. Sen. Rand Paul, a Kentucky Republican. As Paul talked to another group of voters, Tillis spoke with a group of young volunteers.

"How on earth can you protect the nation if you can't protect the White House?" Tillis said to the group.

He was referring to a Sept. 19 incident in which a troubled Army veteran armed with a knife hopped the White House fence and entered the unlocked front door before being apprehended. It was the latest of a series of breaches in the president's security at the White House and elsewhere.

Asked about his comments, Tillis told reporters the breaches spoke to something broader than just the President Barack Obama's personal safety.

"We need to protect the president, whether I disagree with his policies or not. When you can't do something as basic as making sure that someone (doesn't walk) into the White House, it's just another example of a failure. And then you turn around and then really, I guess, gloss over that this is not the first time that it's happened," Tillis said. "It's just another example of failures in this administration. They need to start getting serious about homeland security and national security. They failed on that front, and Kay Hagan has rubber-stamped it every step of the way."

Tillis and Hagan have traded barbs over national security over the past two weeks, focusing on what they see as each other's shortcomings with regard to the United States' response to the Islamic State.