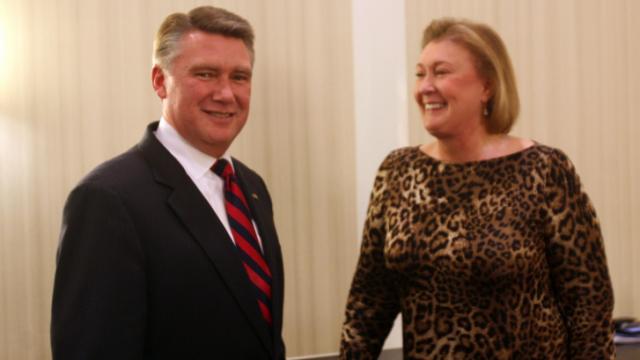 In a poll released Tuesday by Public Policy Polling, a Democratic firm based in Chapel Hill, 19 percent of those surveyed said they would back Tillis in the May 6 primary. That squares with a Time Warner Cable News poll released by Survey USA last week that showed Tillis leading the field with 23 percent support.

In order to avoid a runoff, winning candidates in the May 6 primary must garner at least 40 percent of the vote. If the front-runner misses that mark, a second place finisher can call for a runoff. There are two possible dates for runoff elections:

Tillis is among eight candidates running for the Republican nomination to take on U.S. Sen. Kay Hagan, a first-term Democrat seeking re-election this fall. Dr. Greg Brannon of Cary, Rev. Mark Harris of Charlotte and Wilkesboro nurse Heather Grant are the other contenders polls show are within striking distance of Tillis.

In order to avoid a runoff, Tillis would need to earn 40 percent or more of the vote in the primary. If he falls below 40 percent, the second-place finisher could call for a runoff election that would be held July 15.

In order to hit that mark, Tillis needs to sweep up the 34 percent of voters who were undecided in the PPP poll or pick off support from other candidates, Jensen said.

The PPP results are the third poll in a row showing the race snapping into the pattern expected by many political pundits at the start of the campaign season, with Brannon and Harris making up a second tier of candidates most likely to push Tillis to a second primary.

On March 20, a WRAL News poll conducted by Survey USA showed Harris in fifth place, with only 6 percent of likely primary voters saying they would back him. He has since climbed above 10 percent in both the PPP and Survey USA polls.

With only a month to go before the primary, many voters are preparing to vote early either in person or by mail. The Senate race is also getting more publicity in news reports.

Harris' showing in the March 20 poll placed him well under the 10 percent threshold WRAL News had set for inviting candidates to an April 23 debate, according to WRAL News Operations Director Leesa Moore.

At the time of that poll, WRAL News committed to review subsequent surveys to see if Harris' support surged.

A poll released March 24 by Survey USA that was conducted on behalf of the Civitas Institute showed Harris with 9 percent support when polled head-to-head against other Republicans in the primary. That was still a point below the WRAL News threshold, although he did place third in that survey.

"Rev. Harris has now demonstrated more than 10 percent support in two respected polls. As a result, he has demonstrated the widespread support demanded by our threshold, and we are happy to invite him to the debate," Moore said.

WRAL News extended the invitation to the Harris campaign Tuesday afternoon. Harris has accepted, as have Grant and Brannon. Tillis has not accepted as of April 8.

Both the Harris campaign and N.C. Values Coalition have suggested WRAL News was declining to invite Harris due to his political viewpoints, specifically on social issues such as North Carolina's constitutional ban on gay marriage.

"That is simply not true, and we are disappointed that Harris or anyone else would choose to make such an assertion," Moore said. "The only criteria we have ever used for debate invitations has been performance in polls."

Tillis, Brannon and Grant all support the same group of social policies, including backing the state's constitutional amendment banning gay marriage and limiting the availability of abortion.