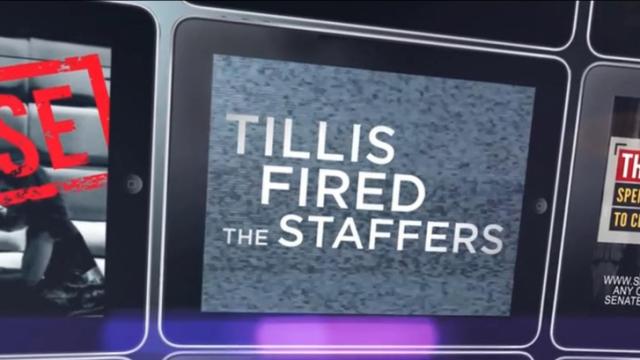 Raleigh, N.C. — State House Speaker and Republican U.S. Senate candidate Thom Tillis is striking back at Democrats who are using a 2012 scandal involving two of the lawmaker's legislative staffers against him.

Senate Majority PAC, which is allied with Democrats, says it will spend nearly $1 million to an air ad highlighting the fact that two Tillis staffers lost their jobs in 2012 after it was revealed they had undisclosed romantic relationships with lobbyists.

Tillis is the front-runner in a field of eight Republican candidates hoping to take on U.S. Sen. Kay Hagan, an incumbent Democrat up for re-election this year. He has produced his own ads to answer the Senate Majority PAC claims.

"Seen those ads attacking Thom Tillis? They're false," says a male narrator. "Tillis fired the staffers. Know who is paying for those sleazy ads? It's Harry Reid. Reid's trying to fool Republican voters, meddling in our primary to get a weak opponent for Kay Hagan."

In order to avoid a runoff election, Tillis needs to earn 40 percent of the vote in the first primary. Otherwise, the second-place finisher can ask for a runoff.

At this point, Dr. Greg Brannon of Cary and Rev. Mark Harris of Charlotte are the most likely second-place finishers. Brannon has used the same Tillis episode in a fundraising mailer.

While both Harris and Brannon have campaign commercials on television, neither has been able to match the amount Tillis has spent. Plus, Tillis has benefited from super PAC American Crossroads airing commercials on his behalf.

The Senate Majority PAC ads could pick off enough voters to keep Tillis from reaching the 40 percent threshold.

Democrats responded to Tillis' ad by calling it misleading. Tillis, they said, didn't fire the staffers in question.

"The truth is, he admitted those two staffers resigned and even used that point to defend the nearly $20,000 in taxpayer money after they were caught having affairs with lobbyists," said Ben Ray, a spokesman for Forward North Carolina, the Democratic political organization working with the Hagan campaign in North Carolina.

WRAL News reported at the time that Charles Thomas, Tillis' chief of staff, "had resigned" and that policy adviser Amy Hobbs had been asked to resign. Asked later about severance pay given to the pair, Tillis said, "There was about two weeks' notice you would normally give in a resignation. I told them they would need to sever on the day they provided it." At the time, Tillis said the severance pay was fair.

Jordan Shaw, a spokesman for the Tillis campaign, stood by the commercial.

"The action initiated by Speaker Tillis resulted in the termination of their employment," Shaw said.