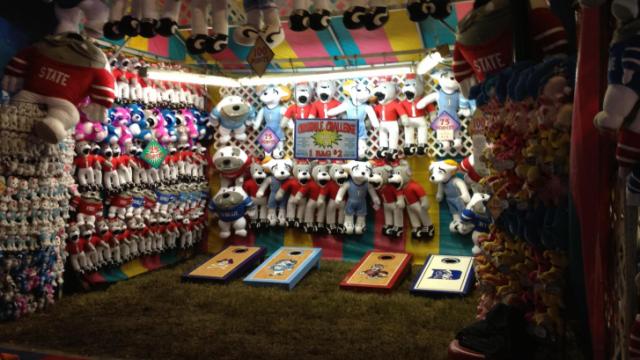 At this writing the Fair's attendance numbers are updated through last Monday. While the numbers have been trending fairly close to last year, the bad weather on Monday really hurt. Considering that last year's weekend numbers were substantive, and the 2011 attendance numbers beat one million by less than ten thousand, I'd guess that chances for the Fair topping one million attendance for three years in a row are getting slimmer and slimmer. However, this shouldn't be considered some kind of disaster -- the ten-year average for attendance is 855,181 and that looks easily reachable.

Do you play cornhole on the weekends? Member of a league? Now you can use your skills at the Fair -- the new midway has a cornhole game. You can win one of several stuffered sports mascots.

Be sure to visit the garden area next to Heritage Circle. There are still plenty of places to sit and chill in the shade, but it also looks like there are several new exhibits back there.

Happy 80th anniversary to McBride's Concessions! The company was started in 1932 by Woody McBride. That reminds me, I still need to pick up some sausage and peppers...

Have you been keeping up with the cooking contest winners? You can get some of them at the State Fair Newsroom page. Cameron Jorgenson's Chai Latte Pie sounds delicious.

Over the last year I discovered that my Whac-A-Mole prizes were in much demand at a local animal shelter where a friend of mine volunteers. Apparently the puppies like to have stuffed animals to cuddle. So now do I not only get to includge my Whac-a-Mole addiction at the Fair, I get to feel like I am doing some good in this world!