Half of Yeshivas Under Investigation Denied Entry to Education Officials, City Says 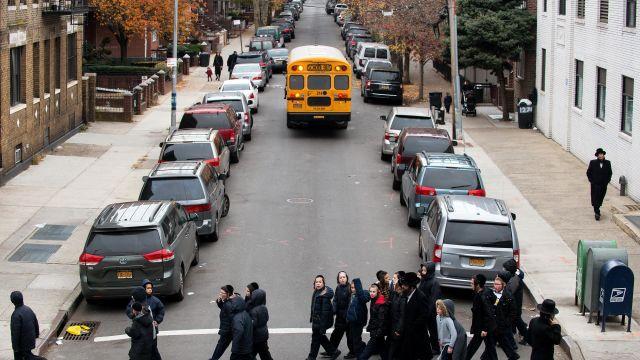 NEW YORK — Three years after New York City launched an investigation into whether certain ultra-Orthodox Jewish schools were providing an adequate education in secular subjects, it revealed Thursday that it had made little progress. In a letter to the New York State Education Department seeking guidance, Richard Carranza, the city's schools chancellor, acknowledged that investigators had managed to visit only half the schools involved.

The inquiry began in the summer of 2015, when a group of parents, former students and former teachers at yeshivas told the city that 39 schools were not sufficiently teaching subjects, such as math, science and English, leaving students ill-prepared for adulthood. The Education Department then launched an investigation of 30 of the schools, after determining the others were either no longer operating or did not fall under its jurisdiction.

As part of its investigation, the Education Department interviewed parents and students who brought the complaint, who had experience at 11 schools. Most of those interviewed said the boys schools taught math and English for at most 90 minutes a day until boys turned 13, at which point secular instruction stopped. Some said attendance during secular instruction was voluntary. And while occasional science experiments might be done in class, they said there was no science curriculum. New York state law requires that nonpublic schools provide an education that is “substantially equivalent” to that of public schools.

Education officials also made announced visits to the schools, but, they said, 15 yeshivas did not allow them inside. “The DOE has made repeated attempts to gain access to the schools,” Carranza said in the letter. “The long delay in scheduling visits to this group of 15 schools is a serious concern.”

Naftuli Moster, founder of Young Advocates for Fair Education, a vocal critic of secular education at the yeshivas, said in a statement, “It is disappointing, but not surprising, that nearly half of the schools to be investigated refused entry to the Department of Education. Reading between the lines, it’s hard not to conclude there is both a lack of secular instruction going on in these schools and that these schools believe they are above the law.”

Moster said he was disappointed that the visits were announced, allowing the schools that did meet with officials to “put their best foot forward — even if it was a fabricated foot.”

Mayor Bill de Blasio’s administration has been criticized for the plodding pace of the investigation. Before his re-election in 2017, his slow-walking may have been deliberate because ultra-Orthodox Jews are a powerful voting bloc in New York City, critics said. They have, in the past, supported de Blasio.

“What we did was a very thorough, careful dialogue to achieve change,” de Blasio said at a news conference Thursday.

Fifteen of the schools, he said, “welcomed us in, participated in an ongoing dialogue, made a number of changes and, according to our educational leaders, are doing well, and/or are making additional changes to do better. There’s another 15 that would not allow DOE officials in the door, and that, to me, is not an acceptable state of affairs.”

Carranza’s letter said that some of the schools that education officials had visited had adopted new English and math curricula, as part of an effort by a group called Parents for Educational and Religious Liberty in Schools, known as PEARLS, which includes yeshiva leaders. The group wrote to the Education Department in 2017 outlining its efforts to improve the schools’ secular curriculum, including training teachers and providing teaching materials.

But Education Department officials said they could not evaluate the new curricula because they only received outlines and samples of those plans.

Avi Schick, a lawyer for PEARLS, said that the 15 schools the city has visited so far have about 13,000 students among them, and the remaining schools have about 3,000. He said visits to the larger schools were organized first and said there was “no denial of access” to the other yeshivas. The city said that, on Wednesday, eight of the remaining 15 schools suggested dates when visits could occur.

In a statement, PEARLS said Carranza’s letter vindicated the schools, saying that it found that the “allegations against the yeshivas have no basis in fact.”

But the letter, which was sent Wednesday to MaryEllen Elia, the state’s education commissioner, does not go that far. In the letter, Carranza asks the state for guidance on how to work with the schools that have tried to demonstrate an increased commitment to secular education and how to handle those that have not cooperated.

“We deeply believe that all students — regardless of where they attend school — deserve a high-quality education,” Carranza said in a statement. “We will ensure appropriate follow up action is taken.”